The first big piece of the upcoming United Nations climate deal has fallen into place. The European Union on Friday became the first major party to the negotiations to declare how far it will go in reducing its climate impacts under a global post-2020 treaty, which is scheduled to be finalized next winter in Paris. 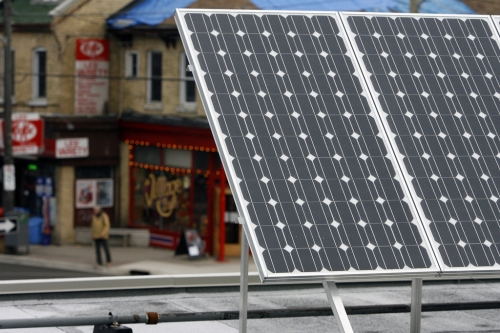 The European Commission’s vote to reduce greenhouse gas pollution levels by 40 percent by 2030, compared with 1990 levels, “will put pressure on all countries,” said Jake Schmidt, the Natural Resources Defence Council’s climate negotiations expert, “including the U.S. and China, to be ambitious when they announce targets next year.”

The European Union’s (EU) 28 countries are responsible for about one-sixth of the greenhouse gas pollution that’s created by humanity every year. The EU is on track to meet its commitment to reduce its climate-changing pollution by 20 percent in 2020, compared with 1990 levels. It aims to reduce greenhouse gas emissions by as much as 95 percent by 2050 — something the entire world may need to do if it's to avoid blowing a goal of keeping global warming to less than 3.6°F.

Friday’s vote by European heads of state, who were meeting in Brussels, puts pressure on the rest of the world to crank up climate action under the upcoming treaty — and not just by setting an example. If the rest of the world continues to flounder in fighting global warming, the Guardian reports that the EU may review its own commitments. Then again, Herman Van Rompuy, the European Council's president, said any such review could see the 40 percent figure actually increased, as some countries and environmental groups have been pushing for.

“The European Council calls on all countries to come forward with ambitious targets and policies well in advance of the Conference of the Parties 21 in Paris,” reads a conclusions document from this week’s meetings. “It will revert to this issue after the Paris Conference. The European Council will keep all the elements of the framework under review.”

Here’s what else the document says:

That’s climate talks wonk-talk for the EU’s 40 percent reduction plans. The U.S. and China are still trying to decide on their INDCs under the climate treaty. The European Council, meanwhile, has now “endorsed a binding EU target of an at least 40 percent domestic reduction in greenhouse gas emissions,” the conclusions document states. All EU countries will “participate in this effort,” and the target will be met “in the most cost-effective manner possible.”

The EU will draw on an energy mix in 2030 that includes 27 percent renewables. And it will improve its energy efficiency by 27 percent by 2030, compared with current projections. Some EU countries are global leaders in energy efficiency, and the new efficiency targets were criticized by some as being unambitious.

To help EU countries trade clean energy among themselves, “urgent measures” will be taken to improve a continental electricity grid, with minimum interconnectivity levels to be met by 2020 and by 2030.

Help for coal in some countries

EU countries with GDP that’s lower than 60 percent of the union’s average will continue handing out free carbon credits to energy companies until 2030. That concession helped prevent coal-dependent Poland from vetoing the deal, but it drew anger from environmentalists, one of whom told The Guardian that it was a grave mistake.