Beginning of the End of CA Drought, But What’s Next?

After a week of being walloped by major storms that have dumped copious rain and snow on the state, California is finally emerging from a deep, years-long drought.

Ski resorts in the Sierra Nevada mountains are flush with snow, while key reservoirs have filled back up. On Thursday, the U.S. Drought Monitor erased all drought in Northern California from the map and dialed back the severity over the southern half of the state. 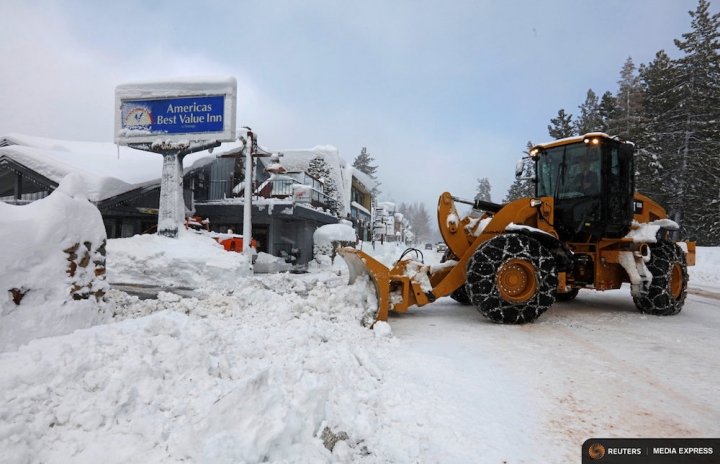 There are, of course, still major deficits in groundwater levels that could take decades to replace and lingering ecological impacts, several experts said, but they agreed the situation had much improved.

“I think overall we’ve gotten through this drought amazingly well,” Jay Lund, a water resources analyst at the University of California, Davis, said.

One key concern going forward is how global warming may alter California’s notoriously boom-or-bust climate: Does it mean more, and more intense, drought? Will it strengthen the storms that bring the state most of its water? The current view is that it could mean both, effectively amping up the already wild variation the state experiences, though there is still uncertainty about some of the potential impacts of warming.

Storms known as atmospheric rivers funneled moisture over California over the past week, bringing days of intense rain and snow. Rainfall totals reached more than 10 inches in some areas, while snows reached more than 8 feet in parts of the Sierra Nevada mountain range (including a stunning 15-foot total at Mammoth Mountain).

The mountain snowpack is crucial for the state because it supplies roughly 30 percent of its water, topping up reservoirs as it slowly melts during the dry spring and summer.

It’s not unusual for California to have dry years followed by wet ones; in terms of its hydroclimate, “it’s one of the most variable places in the U.S.,” Ben Cook, a climate scientist with Columbia University’s Lamont-Doherty Earth Observatory and the NASA Goddard Institute for Space Studies, said.

Progression of drought in the U.S. since summer 2016.

As the world, and therefore California, continues to warm because of the excess heat trapped by human emissions of greenhouse gases, that variability could become more intense.

“Even if precipitation doesn’t change . . . the temperature effect is going to be changing the system,” Cook said.

For one thing, when dry years do occur, they’re going to be drier than they would be today because higher temperatures increase evaporation.

“It means the droughts when they occur are going to be that much deeper” and the recovery from them that much more difficult, Cook said.

Researchers have already suggested that warmer temperatures (which have risen by about 2.7°F, or 1.5°C, since preindustrial times globally) helped to worsen the drought of recent years. California had its hottest year on record in 2014 and its second hottest in 2015.

Warming also means that when storms hit in the future, more of their precipitation is likely to fall as rain rather than snow, diminishing the snowpack that is so crucial to storing water through the dry season. This trend is already evident: Since 1949, 68 percent of weather stations between elevations of 2,000 and 5,000 feet have seen a lower percentage of winter precipitation falling as snow, according to a Climate Central analysis.

Warmer temperatures, particularly in winter and spring, also mean that any snow present is likely to melt earlier and earlier, another trend already in evidence. About 1 percent of meltwater runoff has shifted from spring to winter over the past few decades, Lund said.

That shift means there’s less meltwater to keep soils moist come June and July, potentially taxing local ecosystems, as has been seen throughout the years of this drought. It also means reservoirs may not be able to capture all the water — too much water too early in the season can be a flood threat and requires water managers to release water from reservoirs. Such releases were done this week to protect against flooding in some locations.

What’s less clear is how the overall warming of the planet might impact the major patterns in the atmosphere that help usher in some of the state’s dry and wet periods.

Sometimes, prevailing atmospheric patterns block the atmospheric rivers that are crucial to the West Coast’s water supply — just a handful of these storms account for 30 to 50 percent of annual precipitation the region sees. This happened during the recent drought, with the so-called “Ridiculously Resilient Ridge” shunting these storms further north season after season.

Research by Daniel Swain, a postdoctoral fellow at UCLA, has suggested that these patterns are becoming more prevalent, though whether that’s linked to global warming isn’t yet clear. 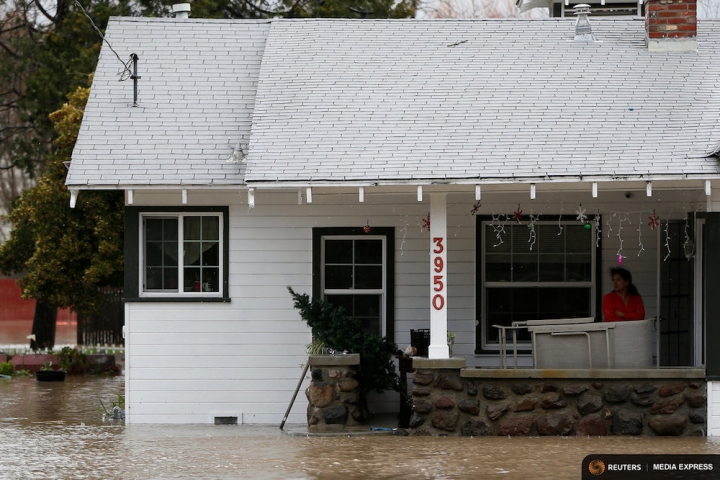 A woman looks out from her home surrounded by flood waters from the overflowing Petaluma River during a winter storm in Petaluma, Calif., on Jan 8.
Click image to enlarge. Credit: REUTERS/Stephen Lam

On the flip side of that coin, climate models also suggest that more atmospheric rivers could impact California in the future, which means more chances for particularly big storms like the one that hit this week. That raises the risk of flooding, particularly when major storms hit back-to-back, as they may do this month, with forecasts suggesting another atmospheric river could impact the West Coast next week.

Events like the drought and the current storm show “how vulnerable we are to these swings in climate that already occur,” Swain said.

Given that existing vulnerability and the growing evidence that these climate swings will only intensify in the future, the potential impacts of climate change are something California will have to grapple with when planning for the future.

“I think things will be a little bit worse . . . than they are now, but not necessarily catastrophic,” Lund said. “We shouldn’t be panicking about this. We should be thinking about it, but not panicking.”