El Niño Is Here, So Why Is California Still in Drought?

A parade of El Niño-fueled storms has marched over California in the last few weeks, bringing bouts of much needed rain and snow to the parched state. But maps of drought conditions there have barely budged, with nearly two-thirds of the state still in the worst two categories of drought.

The short answer, experts say, is that the drought built up over several years (with help from hotter temperatures fueled in part by global warming) and it will take many more storms and almost assuredly more than a single winter — even one with a strong El Niño — to erase it. 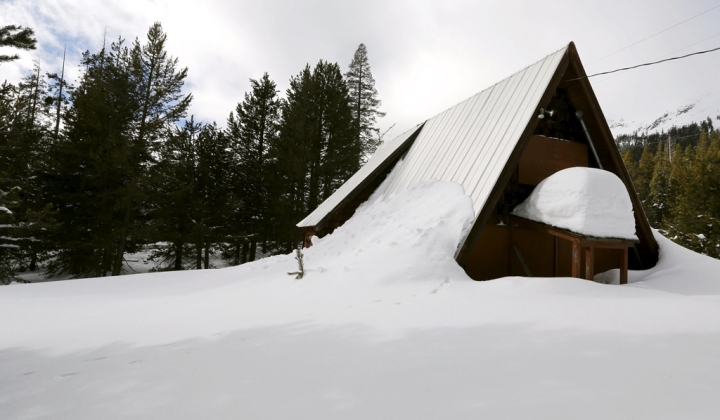 The issue for California comes down to this: there are short-term drought impacts and long-term ones.

With the former, the signs are encouraging: Soil moisture is increasing and some areas are greening up thanks to repeated rains. Temperatures have also been cold enough that snow is building up in the mountains. The snowpack in the Sierra Nevada, a major water resource come spring and summer, is up to an average of 113 percent of normal for this time of year, according to California’s Department of Water Resources (DWR). Compare that to the record low 6 percent of normal at the end of winter last year.

“The good news is we are seeing the benefits of El Niño, but they are trying to climb out of a 4-year drought,” Mark Svoboda, a climatologist with the National Drought Mitigation Center at the University of Nebraska-Lincoln, said in an email.

Long-term impacts like depleted groundwater, low reservoir levels and pitiful stream flows, “they’re not responding much at all yet,” Brian Fuchs, another NDMC climatologist, said. “The reservoir levels have hardly moved.”

Those reservoirs are crucial to agriculture and supplying water to many areas. A report released in June by scientists from the University of California, Davis, estimated that the drought had cost the state’s agricultural industry some $2.7 billion. With levels still low, it’s unclear how much will be available to farmers come spring.

Lake Oroville up more than 20 ft. in the last week! It is at 34% of capacity! #WeStillNeedMoreSnowandRain #CADrought pic.twitter.com/bugTb8C193

To get reservoirs and groundwater back to pre-drought levels will simply take more time and more precipitation.

Such issues “are the last to emerge going into drought and they will be the last to recover coming out,” Svoboda wrote in the most recent Drought Monitor report, which the NDMC puts out on a weekly basis.

That reality has led Fuchs, Svoboda and the other Drought Monitor authors to keep the map of drought in California largely unchanged since late fall, when the storms began blowing through.

If the precipitation continues, there may be some slight easing in the coming weeks, but Fuchs warned that “it’s going to be slow.”

The situation has been very different in Oregon and Washington, which were similarly smothered by drought earlier in the year, but have made huge strides thanks to the spate of storms. Three months ago, Washington was entirely in drought; now just 25 percent is. Oregon has more drought conditions remaining, but the worst-off areas have gone from taking up two thirds of the state to only about 4 percent of it in the same period of time.

The difference in those states, Svoboda said, was that their drought was not as deeply entrenched, having largely developed over only the last year. 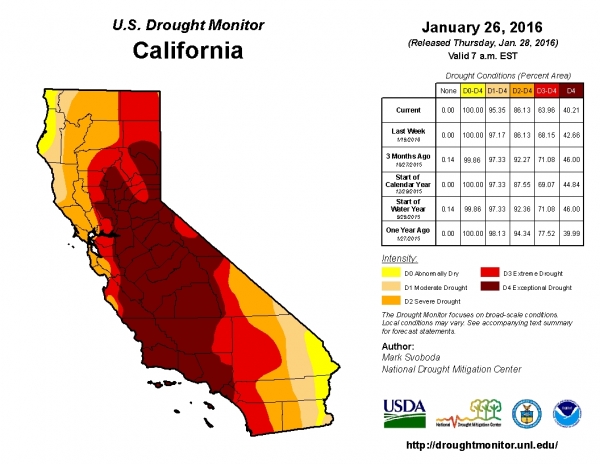 Drought conditions in California, in contrast, have been building up since 2012. Over that time, the state has missed out on nearly a year’s worth of rain, according to a study published in July. That means they need the equivalent of two full years’ worth of rain to catch up. Even if this winter brings above-average precipitation to the state, it won’t be on that level.

Unexpectedly for a strong El Niño, most of the storms so far have hit Northern California, while Southern California has lagged behind in rain and snow totals. El Niño typically shifts the jet stream to a position where it funnels incoming storms over the southern tier of the U.S., and as we are reaching the time of year when El Niño’s impacts typically peak, we could see a shift to that classic setup, Fuchs said.

All the snow in the Sierras is still beneficial to the state as a whole, though, as some of the water that will fill reservoirs when the snow melts is funneled to the southern portions of the state.

Overall, with the precipitation that has fallen in the last few weeks and the expectation that that pattern will hold, “the momentum is there” to make some headway in alleviating the drought, Fuchs said.

“The first of the dominoes has fallen in that they needed to wet up the soils in the short-term so that they release water into streams and groundwater,” Svoboda said.  “But we’re a long ways away yet for seeing California in an all-clear situation.”

You May Also Like:
What You Need to Know About Zika And Climate Change
Europe Probes Wood Energy Market, Climate Impacts
Coal Slides to New Low As Source of Electricity
Wildfires Are Burning Some of the World’s Oldest Trees