East Antarctica is Melting From Above and Below

East Antarctica is remote even by Antarctic standards. Harsh winds and ocean currents have largely cut off the region from the rest of the world.

That’s left its massive stores of ice largely intact, especially compared to West Antarctica where a massive meltdown is underway that could raise seas by 10 or more feet in the coming centuries. But as carbon pollution warms the air and the ocean, there are signs that the region’s stability is under threat. Two new studies of different ice shelves — tongues of ice that essentially act as bathtub plugs — have seen major melting that could portend a less stable future for the region. 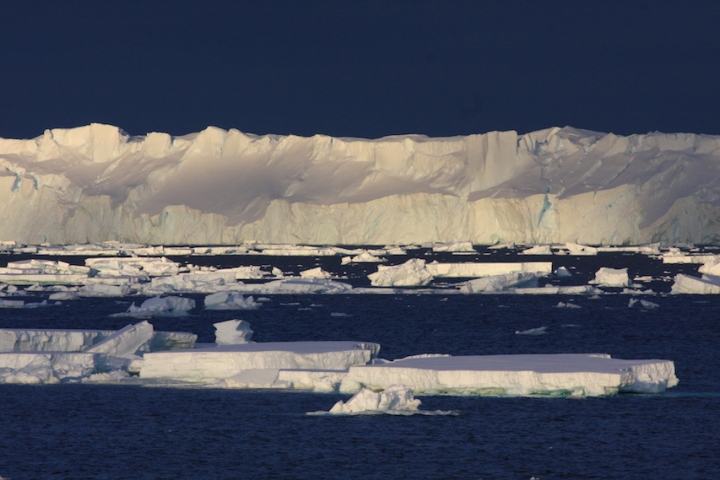 So first, about those ice shelves. They are indeed like bathtub plugs. Except instead of keeping water in a tub, they keep ice on the continent of Antarctica. That’s good because when it ends up melting into the ocean, it causes seas to rise. East Antarctica contains about two-thirds of all the ice in Antarctica so its stability is crucial for the world’s coastal areas.

But strange things have been happening recently. During a 2014 flyover of the Roi Baudouin ice shelf, scientists noticed a curious depression more than a mile wide in the undulating ice. When they finally investigated it in January this year, they found walls that were about 10 feet high and meltwater pouring into moulins — features that funnel surface meltwater into the heart of the ice.

The moulins were just one sign of melt happening on the surface. When scientists drilled a hole in the ice and lowered a camera, they found an otherworldly blue lake stretching more than half a mile across.

Research published in Nature Climate Change shows that the cause of these bizarre features are the powerful winds that blow down from Antarctica’s interior. Jan Lenaerts, a postdoctoral researcher at the Utrecht University in the Netherland who led the study, said that those winds helped heat the air and caused white ice to melt out, exposing a layer of dark ice beneath. That darker ice in turns absorbs more sunlight, further expediting the melt.

“Although we only found this on one ice shelf, we find the same mechanisms on many East Antarctic ice shelves,” Lenaerts said. “Given the strong response of surface meltwater production and extent of meltwater processes on the shelf to summer temperature, we can expect that in a warmer climate, these ice shelves might be vulnerable to instability that is driven by meltwater hydrofracturing.”

This on its own would be distressing news for the planet’s coastal communities. But there are also signs that warm water is undercutting at least one of East Antarctica’s other ice shelves. The Totten ice shelf is one of the most important ice shelves in the region. It backstops so much ice that if it were to melt, it would result in up to 12 feet of sea level rise.

Recent research has shown that its geology and interactions with the ocean mean that losing just 4.2 percent of its mass could kickstart the process to send more inland ice to the sea. And it has been melting faster than most other glaciers and ice shelves in East Antarctica.

“We knew from satellite data that the Totten has been thinning faster than other glaciers in East Antarctica, but we didn’t know why,” Steve Rintoul, the interim head of CSIRO’s Climate Science Center, said in a statement.

That’s why Rintoul and his colleagues set out to look more closely at the ice in January 2015 on the Aurora Australis, an Australian research boat. They were able to visit the calving front of the ice — where the shelf ends in the ocean — thanks to a fortuitous path that broke in the sea ice in January 2015. It’s the first time direct measurements have ever been taken by boat in the region.

Their findings from that trip, published on Friday in Science Advances, show that the bedrock underlying the ice shelf is a major driver in the melt process. They found two massive ocean channels up to 6 miles wide and a half mile deep are funneling warm water under the ice shelf and melting it out from underneath.

Taken individually, the studies are disconcerting enough. Put together, though, they paint a picture of a region that could become a much bigger player in sea level rise if carbon pollution isn’t curtailed soon.