NWS Staff Walks to Work in Blizzard Despite Shutdown

During the government shutdown, the 122 National Weather Service (NWS) forecast offices across the country are still operating, issuing potentially life-saving forecasts and warnings. “Neither snow nor rain” is part of the unofficial motto of the U.S. Postal Service. However, NWS employees in Rapid City, S.D. seem to have taken that motto to heart. 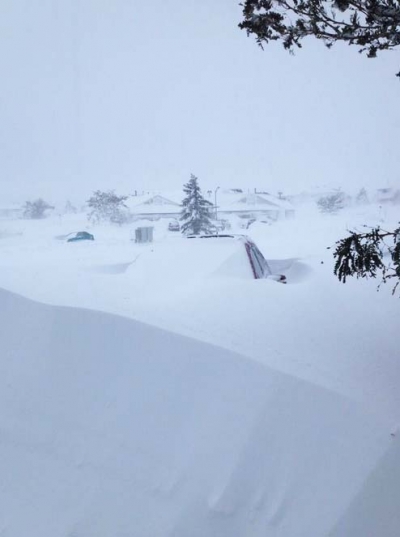 Like most other federal workers during the shutdown, the NWS meteorologists are not getting paid right now, and are hoping to receive back pay for work performed during this period. Not only are the meteorologists working for no pay, at least temporarily, but they’ve had to deal with some truly exceptional weather conditions this past weekend that have posed forecasting challenges and even put them in harm’s way.

A record-breaking early season blizzard struck a number of states from the northern Rockies to the Northern High Plains on October 4-5, dumping nearly 5 feet of snow and piling the snow into drifts up to 10 feet high in places. Those conditions created hurdles for NWS staff that would be tough to surmount under any circumstances, least of all during a government shutdown when offices are short-staffed and support services, such as technical support from NWS headquarters, are stretched thin.

Below is a message sent from the NWS forecast office in Rapid City to the NWS Central Region Headquarters in Kansas City, Mo. on Sunday morning at 9:09 Central Time. This was sent to Climate Central from an NWS meteorologist who was not authorized to share any information related to the government shutdown, and some of the details contained within the message were confirmed with a staff member from the Rapid City office on Monday morning. The employee said the message speaks to the “dedication” of the NWS staff during the shutdown.

(This message has been edited to decode some of the acronyms.)

“Access to the office is still blocked. Two employees were able to hike in around some obstructions, but it is not possible to drive out of the parking lot due to snow drifts and downed trees in the neighborhood. The SOO (one who hiked in) is attempting to take two stranded employees home this morning. One forecaster hiked in for his mid shift last night, and I sent him home so he can come back tonight. Of the three who are on duty at this time, two have been here since 7 a.m. Friday, and I have been here since 3 p.m. Friday. We have two NWR (NOAA Weather Radio) transmitters down: Terry Peak and Rapid City. We have three ASOSs (Automated Surface Observing Stations) down: IEN (Pine Ridge, S.D.), RAP (Rapid City, S.D.), and PHP (Philip, S.D.).”

“We are on commercial power which has been stable since yesterday evening. Rapid City is pretty much paralyzed, and recovery and repair operations are in full swing. We have heard that the governor called in the national guard. Conference call briefing expected to take place later this morning. There is some concern about the potential for flooding with temperatures warming up quickly tomorrow and melting off the large snowpack. we have 1 to 4 inches of liquid equivalent on the ground and a big rain storm in the models for Friday. 8:09 a.m. MDT”

The Washington Post's Capital Weather Gang blog has since confirmed the author as David Carpenter, the meteorologist-in-charge of the Rapid City forecast office. The Post reported that four forecasters stayed at the office between Friday and Sunday morning, taking turns napping and assuming forecasting duties.

Winds during the blizzard gusted to near hurricane force (74 mph), topping out at 71 mph in Ellsworth, South Dakota, and 68 mph in Rapid City. 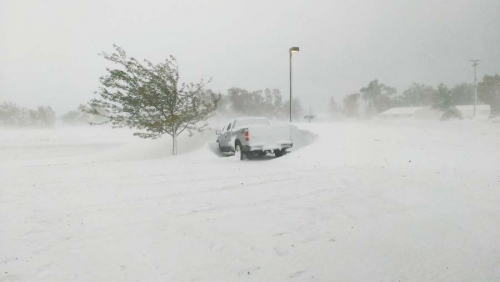 The scene in the parking lot of the Rapid City, S.D. NWS forecast office during the blizzard, taken on Oct. 5.
Credit: NWS via Facebook.

The Associated Press reported that roads were impassable in Rapid City due to stuck vehicles, massive snow drifts, and downed trees and power lines. Blizzard conditions, with at least three hours straight of visibility down to 1/8th of a mile, occurred in Rapid City during the storm.

A whopping 48 inches of snow fell in Deadwood, S.D., making it that city's 3rd-heaviest snowstorm on record. October 2013 is now the snowiest such month on record in Deadwood as well. For perspective, Deadwood receives 6.6 inches of snow in an average October according to data from the Western Regional Climate Center.

On Monday, the NWS reported two snowfall totals that were even higher. One, from near Beulah, S.D., was a staggering 58 inches, with 55 inches recorded at Lead, S.D.

Rapid City picked up 23.1 inches of snow, making it the second heaviest snowstorm on record there, and the top October snowstorm on record. It was also the city’s third-heaviest one-day snowfall total. Rapid City was under the gun back in April, when 22.4 inches of snow fell on April 8-10, 2013 according to weather.com. Heavy snow also fell in Colorado, Nebraska, North Dakota, Montana, and Wyoming.

A request for comment has been sent to NOAA Public Affairs in Washington, although many employees there have been furloughed during the shutdown.

While the weather service forecast offices are open, employees are not allowed to engage in their typical full range of activities, and only emergency maintenance is allowed during the shutdown, which has no end in sight. Much of NOAA’s research activities have also stopped or been slowed.