LONDON – Imagine the scene in the packed stadium: those magic boots dance as the winger flies down the touchline and crosses the ball perfectly into the penalty area, right on to the head of the striker. He rises, he heads the ball goal wards – and then the lights go out. 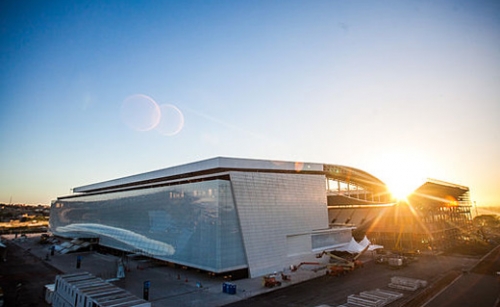 Sao Paulo’s Corinthians Arena, venue for the opening match of the World Cup, in the midst of the worst drought in decades.
Credit: Edson Lopes Jr. , Wikimedia Commons via Climate News Network

Although recent rains have brought some relief, many parts of Brazil are in the grip of the most severe drought for years, and temperatures have been unusually high. In many areas, reservoirs at hydro plants – which produce about 70 percent of Brazil’s power – are at record lows.

São Paulo state in the southeast, where the World Cup’s opening game will be staged on June 12, is home to more than 43 million people and is the country’s economic powerhouse. But it has been experiencing its worst drought since rainfall records began in 1930.

In order to keep the lights on, the government of President Dilma Rousseff has been desperately upping energy supplies from thermal power stations. But fears persist that blackouts will hit during the World Cup.

If that happens, it’s likely to add to the anger felt by many Brazilians about the billions of dollars being spent on facilities for the football tournament – and on staging the Olympics next year.

To ward of public discontent, the government has been forced to spend the equivalent of more than $5 billion to subsidize utilities that are having to replace hydro power with more expensive oil, coal and natural gas.

Analysts say consumers will have to pay substantially more for their energy, although price hikes are likely to be delayed until after elections in October. The government has also dismissed the idea of power rationing – for now at least.

While the government worries about power supplies, Brazil’s agriculture sector – which accounts for about 25 percent of the country’s Gross Domestic Product – is suffering potentially long-lasting drought damage.

Professor Hilton Silveira Pinto is a climate researcher at the Center for Meteorological and Climate Research Applied to Agriculture at the University of Campinas. He told the Bloomberg news service: “This is a taste of what is to come in the future.” 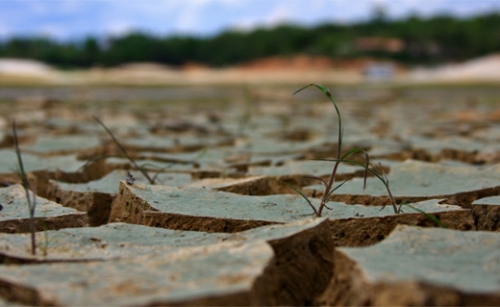 Coffee growers in the states of São Paulo and Minas Gerais in the southeast have seen their crops fail due to record high temperatures, combined with drought conditions.
Credit: Hudson Alves/Flickr

A study co-authored by Pinto warns that large numbers of farmers could be forced to abandon their lands and migrate to more temperate areas as temperatures rise. Coffee growers in the states of Sao Paulo and Minas Gerais in the southeast have seen their crops fail due to record high temperatures, combined with drought conditions.

In Bahia state and other areas in the north-east of Brazil, farmers have lost crops and large numbers of livestock as the drought has persisted.

The study says projected future warming trends indicate that Brazil’s overall production of soybeans could decline by as much as 24 percent by 2020, with wheat production dropping even further.

That’s not just bad news for Brazil and millions of its farmers. Over recent decades, Brazil has emerged as one of the world’s leading agricultural producers, and is now the number one exporter of soybeans, beef, sugar, orange juice − and, of course, coffee.

Prices of these goods are set to rise internationally, so Brazil’s changing climate and its drought is likely to have an impact not just on World Cup football.