It’s official: Last year was Australia’s hottest on record. As temperatures go up Down Under, so do concerns about how to keep rivers cool in a warming world. Ironically, the soundest solution could mean tapping into what has long been considered a pollutant. 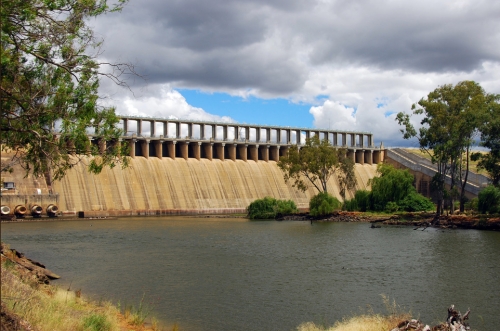 Dams have long been vilified for blocking fish migrations. But the deep reservoirs of dammed water do something free-flowing rivers can’t: stratify so that the cooler layers settle to the bottom.
Credit: Flickr/Heritagefutures

Until recently, scientists only studied how cold water releases from dams can send a thermal shock to downstream aquatic species — impacting fish growth and reproduction. But, not long from now due to the changing climate, what was a thermal shock could be a cool splash of relief, as dam managers increase efforts to mimic the timing and quantity of natural stream flows. A growing trickle of evidence, including a 2013 report [PDF] from Australia’s National Climate Change Adaptation Research Facility, suggests that dams can provide engineered resilience to climate change — if we can figure out how to dial in a suitable temperature. It’s a strategy dam managers around the world are exploring.

Dams have, unquestionably, altered stream ecology — and have long been vilified for blocking fish migrations. But the deep reservoirs of dammed water do something free-flowing rivers can’t: stratify so that the cooler layers settle to the bottom, blanketed by the lower density, sun-kissed surface waters. And most dams, especially those in Australia, are built to release water from the chilliest lower levels.

Australia is feeling the heat sooner than most. Melbourne’s average annual number of days above 35° C (95° F) are expected to increase — from nine days currently to 26 by 2070 — meaning, among other things, Australia’s native freshwater fishes face an uncertain future. “We don’t have a lot of room to play with here in Australia because the continent is generally flat, so fish can’t easily swim up in altitude to find cooler water,” says Jamie Pittock, an international expert on the sustainable management of water at Australian National University in Canberra.

“Until recently, discussions on how to use cold water releases below dams as a climate change adaptation strategy were reserved to the hallways of conferences and over drinks after work,” — Julian Olden

It is no small irony that future fishes may have a better chance of surviving long, hot, dry summers in dammed rather than free-flowing rivers. It’s the latest twist in the saga of society’s love-hate relationship with dams. As always, fish survival is a flashpoint.

The fish forecast is equally bleak in the western U.S. “Warm temperatures and very low summer flows make the west slope of California’s Sierra Nevada mountain range in August a harsh place for a lot of fish,” says Bruce McGurk, the former dam operator at the Hetch Hetchy reservoir near Yosemite National Park, which supplies San Francisco’s drinking water. “Without a dam, 50 percent or more of those miles of streams that have fish may not have them in 2100,” he says.

Greater temperature control makes for tough choices, however; most notably, how to dial in a temperature suitable for native species, introduced recreational fish and myriad other aquatic organisms.
Credit: istockphoto.com/slobo via Ensia

A recent study suggests that undammed streams will not only be warmer at the end of this century, they will be warmer for longer. “We’ve shown that in a warmer future, unimpaired rivers and streams will be far too warm for some organisms — and, in some cases, we’ll have to use regulated rivers to manage them,” says study co-author Joshua Viers, a watershed scientist at University of California, Merced.

As global climate warms, water temperature is getting more management attention. “Temperature control is just starting to get traction as a climate change adaptation idea — largely because it has momentum as a strategy for dealing with threatened or endangered salmonids below dams,” says David Purkey, U.S. Water Resources Group Leader at the Stockholm Environment Institute in Davis, Calif.

It’s a big shift in thinking. “Until recently, discussions on how to use cold water releases below dams as a climate change adaptation strategy were reserved to the hallways of conferences and over drinks after work,” says Julian Olden, a freshwater ecologist at the University of Washington in Seattle. It’s not as straightforward, he says, as turning on a cold faucet to cool a hot streambed.

Greater temperature control makes for tough choices, however; most notably, how to dial in a temperature suitable for native species, introduced recreational fish and myriad other aquatic organisms.

Most dams can only discharge water from either the warmer surface or, more often, the colder bottom levels of the reservoir. Expensive temperature control devices can be needed to selectively discharge water from different reservoir depths. Roughly 40 dams in the western U.S. have them, according to the Bureau of Reclamation. There are 75,000 dams in the Army Corps of Engineers U.S.-wide database.

Shasta Dam, one of the largest facilities in northern California, was one of the first to be modified with a temperature control device to protect salmon. The 300-foot tall structure on the back of the dam enables managers to combine water from different levels in the water column to reach the ideal temperature in the outflow to the Sacramento River below, while maintaining power production. The modification cost a cool $80 million in 1997.

Cheaper temperature control options do exist. For example, a $3.4 million curtain will soon be installed at Burrendong Dam on the Macquerie River in New South Wales, Australia. The movable floating curtain can be positioned between 2 and 10 meters below the surface, selectively funneling warmer or cooler waters to the outlet.

Greater temperature control makes for tough choices, however; most notably, how to dial in a temperature suitable for native species, introduced recreational fish and myriad other aquatic organisms.

“Although seemingly intuitive, in reality this management idea is fraught with challenges that just haven’t been fully thought out yet,” says Olden. For example, most dams are impassible for fish and other aquatic organisms. “Cold water releases [in the future] may act as an ecological trap by attracting fish to cooler waters but not providing the habitat and spawning requirements that were eliminated by dam operations,” he adds.

Taking temperature into consideration adds one more layer of complication to the already complex world of water resource management.

Balancing human and fish needs is another formidable challenge. Lisa Thompson, a researcher at the University of California at Davis, has modeled the trade-offs between power generation and fish in California’s Sierra Nevada streams. She and colleagues found that, of the strategies tested, only ceasing power production and diverting cold water downstream during the hottest summer stretches could maintain the cold temperatures needed by spring-run Chinook salmon in Butte Creek, Calif. The strategy is currently being used, largely because the stock of Chinook salmon is deemed important and the powerhouse needs costly repairs to generate power. Surprised by this potential ecological benefit of the dams, Thompson says, “it has become a ‘since they are there, we might as well use them’ conversation.”

Modifying dam operations to include cold-water strategies is hardly a long-term solution, however. “At least in the watershed we looked at, [such strategies] will simply buy time to solve the overarching problem of climate change,” says Thompson. There will come a point, likely around 2070, that creeks will be so warm that dam releases won’t be enough to sufficiently cool the waters for fish. “By end of century, air temperatures will be so hot, it will overwhelm any fish survival benefits resulting from infrastructure improvements.”

So, some U.S. scientists are exploring ways to create more cold-water pools. But that, too, is a tricky endeavor. For example, raising the dam height doesn’t guarantee more cold water. Purkey found that if raising a dam simply increases the shallow water storage, the reservoir will actually get hot quicker because the larger area of shallow water potentially absorbs more heat.

And, to be clear, building new dams is not a climate solution. “I think there is a misperception that more dams equal more water, but, unfortunately, that’s just not the case,” says Sarah Null, who models water resources at Utah State University in Logan.

Taking temperature into consideration adds one more layer of complication to the already complex world of water resource management. “We’re at a tipping point in terms of water resources policy,” says Viers. “Are we going to address water management in a proactive way with multiple stakeholders, or are we going to jerk from one crisis to another?” he wonders.

McGurk, however, says water resource managers have a historic opportunity to bring ecosystem issues onto the same footing as the dam’s societal benefits, including power, irrigation and drinking water. “We can’t operate a dam to be completely benign to the environment, but we can do a better job,” he says, adding, “and that makes for an interesting tightrope that reservoir managers must now walk.”