LONDON – An ambitious attempt to learn more about what is happening to the Arctic sea ice is getting under way with the start of a two-week research cruise to the waters off the north-eastern coast of Greenland. 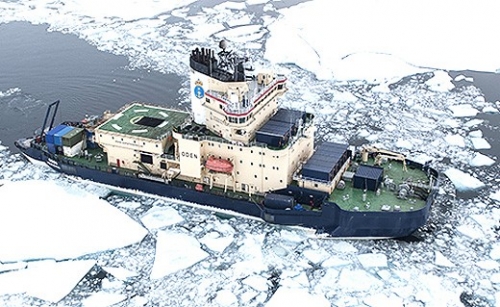 The polar icebreaker Oden will help a team of researchers learn more about the potential impact of ice on shipping and other structures that may use the area.
Credit: NTNU

The scientists will measure a range of parameters of the sea ice, icebergs and how they interact with their ship, the Swedish polar icebreaker Oden. The voyage, coming at the end of the northern hemisphere summer, coincides with the lowest levels of ice in the Arctic.

The researchers are returning to an area they studied last year, allowing them to retrieve instruments moored underwater since then which have been collecting ice and ocean current data in the meantime.

This will help the team to learn more about the potential impact of ice on shipping and other structures which may use the area, and to prepare the way for the exploitation of the Arctic’s mineral wealth.

Five marine mammal researchers will also be aboard the Oden to conduct acoustic research and combine conventional observations with more high-tech approaches.

The multinational group sailed from Longyearbyen in the Svalbard archipelago. It includes Arctic offshore engineering scientists from the Norwegian University of Science and Technology (NTNU) and colleagues from nine international universities and companies, and from the Swedish Polar Research Secretariat.

“The offshore area north-east of Greenland is a very interesting place for us, because it is a place with multi-year ice and with quite heavy drift of sea ice and icebergs,” says Raed Lubbad, the cruise leader.

He is an associate professor based at SAMCoT, NTNU’s center for Sustainable Arctic Marine and Coastal Technology, and says SAMCoT “works with the development of robust technology necessary for sustainable exploration and exploitation of the valuable and vulnerable Arctic region.”

One of Oden’s most challenging tasks will be to retrieve four underwater installations deployed last year, whose instruments include upward-looking sonar and acoustic doppler current profilers (ACDPs), which measure water currents. 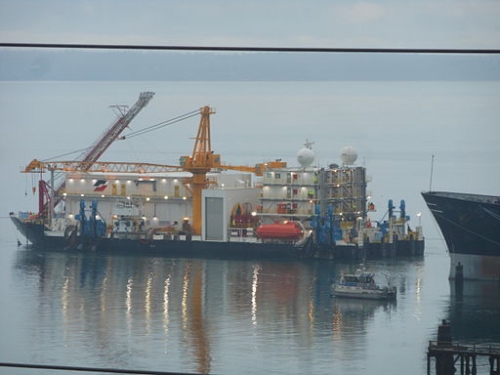 Researchers say some of the most interesting data concerns the frequency and thickness of ice ridges.
Credit: T J Guiton/Wikimedia Commons via CNN

The ship will send a signal to the instruments which tells them to release their moorings and pop up to the surface – but if there is too much ice over the area where they are it will be hard to find them, or to retrieve them.

“These are very important,” Lubbad says. “They give us long time series data on ice thickness, drift and sea currents that enable us to quantify the physical environment.”

The team says some of the most interesting data from the instruments concerns the frequency and thickness of ice ridges. An ice ridge forms when two ice sheets are pressed against each other and consists of accumulated pieces of broken ice, so that its total thickness is much greater than that of the original ice.

“These ice ridges typically produce the highest loads on structures,” Lubbad says. “Knowing how thick these ridges are, how fast they drift and how frequent they are is very important for the design of ships and floating structures.”

The marine mammal biologists will not only be able to study a relatively remote area but also to work with colleagues in identifying ice features that can be important habitat for marine mammals such as polar bears.

They will use hydrophones to listen for animals underwater, as well as an infrared camera which will enable to them to find animals that might be difficult to detect visually.

The 32 participants are from 14 countries and come from universities in Norway, the Netherlands, Russia, Spain and the U.S., and from Norwegian and Canadian companies.