A major weather bill that would elevate critical weather forecasting within the nation's oceans, climate, and weather agency got one step closer to reality on Thursday as the House Science Committee approved it.

The bill, known as the “Weather Forecasting Improvement Act,” now heads to the full House for consideration. If it passes, and there are no guarantees given the small window left in the legislative calendar, it would be the first broadly focused weather bill to be enacted by Congress since the mid-1990s. 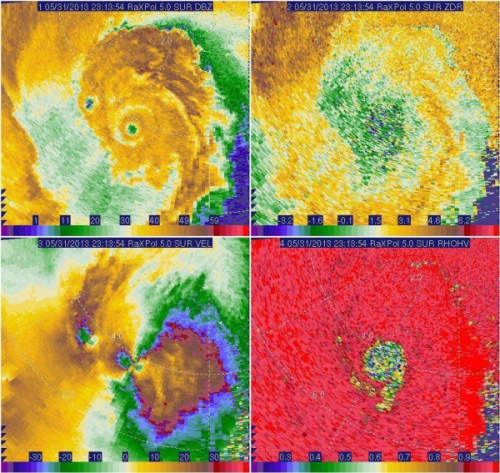 High-resolution radar imagery from the OU RaxPol mobile research radar showing different aspects of the El Reno, Okla., tornado. In the top-left image the main vortex is located in the center of the larger donut hole. Advanced technologies such as this radar may help forecasters extent tornado warning lead times.
Click image to enlarge. Credit: Twitter via @WunderAngela.

The bill would establish a research program within the National Oceanic and Atmospheric Administration (NOAA) to extend the lead time for tornado warnings beyond 1 hour, and contains provisions aimed at closing the performance gaps between the agency’s weather forecasting computer models and those of other nations.

The current lead time for tornadoes nationwide is about 14 minutes, and many meteorologists believe that technological advancements could allow that time to be significantly increased. However, some social science research has shown that with lead times of longer than about 30 minutes, people may not respond appropriately to the danger. Instead they may delay seeking protective cover.

In a press release, Republican Rep. Jim Bridenstine, who represents tornado-prone Tulsa, Okla., touted the bill’s creation of a program that would seek to extend tornado forecasts and warnings. “The passage of this bill out of the Science Committee is a victory for Oklahomans and all Americans who live in tornado-prone areas,” he said.

The bill passed by voice vote with bipartisan support and was co-sponsored by Bridenstine and Democratic Rep. Susan Bonamici of Oregon. It comes in response to a record number of billion dollar weather events in 2011, including a devastating tornado season, as well as Hurricane Sandy in 2012, which caused upward of $70 billion in damage.

Those events and others shined a spotlight on the shortcomings of U.S. computer modeling capabilities compared to the European Union and Japan. One of the main European weather forecasting models accurately predicted Sandy’s unprecedented and deadly path nearly a week in advance, days ahead of the U.S. model.

The bill also seeks to address an upcoming gap in polar-orbiting satellite coverage due to delays and cost overruns affecting the next-generation of satellites. The satellite issues are likely to degrade the reliability of medium-range weather forecasts in the U.S. for at least 1 year, starting in 2017, when the lifetime of the youngest satellite is exceeded before a replacement will be available. 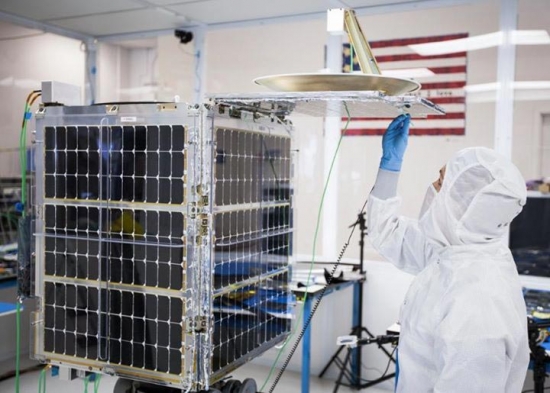 Private sector firms like Skybox imaging are already launching fleets of small, environmental-observing satellites that could deliver valuable data to NOAA and other government agencies.
Credit: Skybox Imaging via Facebook.

In part to address the satellite data gap, the bill contains provisions that encourage NOAA to look to the private sector for tools to accomplish its mission, and pointedly reminds the agency, which operates the country’s fleet of troubled weather satellites, that it is already authorized to obtain weather data through contracts with private companies, including firms that are planning to launch their own fleets of environmental satellites.

Companies such as PlanetIQ and GeoOptics are planning vast networks of low-cost satellites that would gather data relevant to weather and climate forecasting, and then sell that data to governments and other companies. So far, NOAA has spurned the idea of purchasing their data, citing concerns about its accuracy, reliability and liability should the satellites fail.

The bill would direct NOAA to submit a report assessing the commercial opportunities for securing cost-effective, space-based weather observations.

The language in the bill was significantly altered from when it was originally introduced in July. At the time, Democrats on the Science Committee argued that the bill as introduced would have boosted support for NOAA’s weather programs at the expense of its climate and oceans science programs. Since then, the American Meteorological Society, National Academy of Sciences, and the Weather Coalition, among others, worked to make changes to the bill.

According to the amended bill that passed the committee, it would be up to NOAA’s leaders to decide how to interpret the bill’s language, particularly the meaning of making “weather-related activities” the top priority throughout the agency, from the National Weather Service to the National Ocean Service.

In implementing the bill, NOAA could assert that climate and oceans research is essential for predicting the weather, and therefore major changes in the agency’s programs are not required. The original bill had directly stated that weather forecasting must be NOAA’s “top priority.”

Under the amended bill, Rep. Bonamici said, “. . . weather research is strengthened, but not at the expense of other important work.”

Bridenstine said he intends to push for the bill to be brought up by the full House during the remainder of the current congressional session.