A tornado outbreak on Sunday left at least two people dead in Oklahoma and nearly two dozen injured after the busiest day in what had been an unusually tame 2013 tornado season. 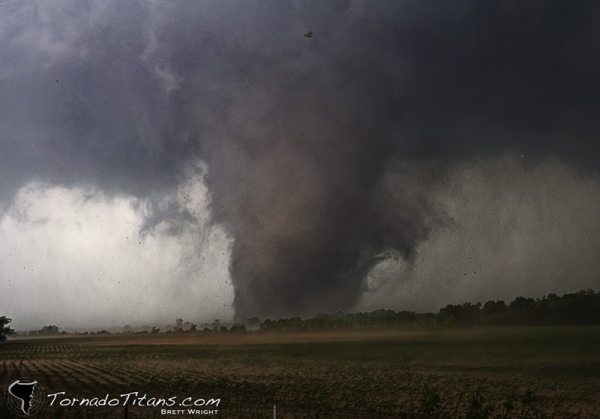 The Shawnee, Okla., tornado that caused major damage southeast of Oklahoma City on May 19.
Credit: TornadoTitans.com/Brett Wright via Facebook.

Severe thunderstorms struck from Oklahoma all the way to Minnesota as a strong cold front edged eastward, plowing into warm and humid air. Strong upper-level winds provided support for supercell thunderstorms, which are thunderstorms that have persistent rotation associated with them, and can cause tornadoes and damaging large hail.

Several cities narrowly missed direct hits, including Oklahoma City and Wichita, Kan. In Wichita, a tornado touched down near the Mid-Continent Airport, and a “tornado emergency” was declared for the city. On the livefeed of KSN-TV’s storm coverage, the sound of large hail striking the studio’s rooftop was audible, and the TV meteorologists hastily retreated to the station’s storm shelter, leaving an eerily silent radar image on the screen.

A total of 24 tornado reports were received by the Storm Prediction Center in Norman, Okla. The Weather Channel broadcast at least two large tornadoes live as they formed and strengthened, including one of the most damaging twisters, which struck near Shawnee, Okla. The National Weather Service gave the Shawnee tornado a preliminary rating of EF-4 on the Enhanced Fujita Scale, with winds of up to 200 mph.


Footage from KSN-TV in Wichita as the news team moved to their storm shelter.

According to news reports, the worst of the damage in Oklahoma was centered on the Steelman Estates Mobile Home Park, which is located about 35 miles southeast of Oklahoma City.

“It took a dead hit,” resident James Hoke said. Emerging from a storm cellar where he sought refuge with his wife and two children, Hoke found that their mobile home had vanished. “Everything is gone.”

Hoke said he started trying to help neighbors and found his wife's father covered in rubble.

“My father-in-law was buried under the house. We had to pull sheetrock off of him,” Hoke said.

More severe thunderstorms were expected Monday, with Oklahoma City, Tulsa, and Springfield, Mo., at the highest risk for severe storms, according to the Storm Prediction Center. The threat for severe weather also extends south to Dallas, and northward into the Midwest, including Chicago, Indianapolis, and Detroit.

The tornado outbreak over the weekend follows a deadly outbreak in Texas on May 15, when six people were killed by more than a dozen tornadoes.

So far, there’s simply not enough information to say anything definitive about the future of tornadoes under climate change. Studies of how the environment that gives rise to severe thunderstorms and tornadoes may change as global warming continues shows that the number of thunderstorm days may increase in parts of the U.S. — owing to an upward trend in heat and humidity — but wind shear may decrease, which could curtail tornado numbers.