By Michael Safi, The Guardian

High ocean temperatures off the West Australian coast are “unprecedented since at least 1795” and pose a significant threat to the state’s coral reefs, scientists say. 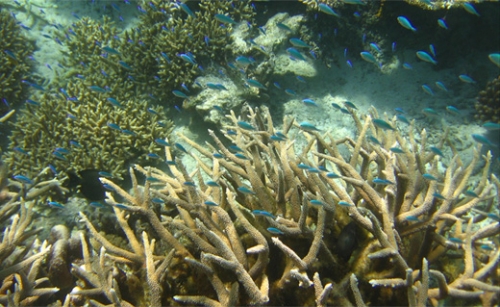 The study shows that the period after 1980 “was very likely the warmest period with highest sea levels” off the WA coast since 1795, as far back as the coral records show.
Credit: jdegenhardt/Flickr

Core samples taken from coral colonies around the Houtman-Abrolhos Islands, west of Geraldton, have provided scientists with records of ocean temperature and sea levels going back 215 years.

In the way that rings around a tree’s trunk can reveal its age, the rings that form on coral skeletons can reveal centuries’ worth of information about its marine environment.

The study, conducted by the Australian Institute of Marine Science (Aims) and others, shows that the period after 1980 “was very likely the warmest period with highest sea levels” off the WA coast since 1795, as far back as the coral records show.

The core samples show that ocean temperatures and sea levels in the area have always varied, Dr. Jens Zinke, an Aims scientist, said. La Niña events in the tropical Pacific strengthen the Leeuwin current, an ocean current that flows south down the WA coast, resulting in unusually warm water and higher sea levels. El Niño phases have the opposite effect.

But La Niña phases in 1999, 2008 and 2011 were the strongest in 215 years and took place in the context of “ongoing background warming of ocean temperatures associated with climate change,” Zinke said. The result was the extreme coral bleaching events of the kind that occurred in 2011, 2012 and 2013.

“Ocean temperatures have warmed so much and sea levels have risen so much over the last 150 years that every natural event is amplified,” Zinke said. “So any future heatwave is probably going to be more extreme.” 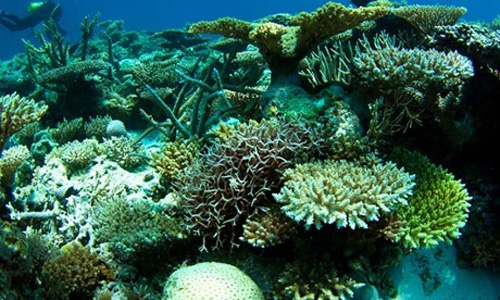 A coral reef off the coast of Western Australia: the rings on coral skeletons reveal centuries' worth of information.
Credit: Nick Thake/AAP via The Guardian

El Niño years, which usually cool the area and allow the coral to regenerate from any damage cause during the La Niña phase, have also become warmer, recording temperature increases greater than half a degree since 1980.

Global warming always expected to harm WA’s coral reefs, Zinke said. But the damage is happening far sooner than predicted. “We were hoping that WA … still had some time to react or adapt to the changes. But we’re now seeing all these heat waves. It’s not that change is going to come, it’s that change is already happening.

“We’ve crossed this line where coral bleaching can now occur on a large scale.”

The findings were published in the scientific journal Nature Communications.