The dream of harnessing the mighty Congo with the world's largest set of dams has moved closer, with the World Bank and other financial institutions expected to offer finance and South Africa agreeing to buy half of the power generated.

In the past 60 years French, Belgian, Chinese, Brazilian and African engineers have all hoped to dam the river.

But decades of civil war, corruption, and the Democratic Republic of Congo's (DRC) reputation as a failed state have limited the hydropower developments at the country's Inga Falls to two relatively small dams, built in 1972 and 1982. These, known as Inga 1 and 2, have a theoretical capacity of 1,400 megawatts but produce about half that. 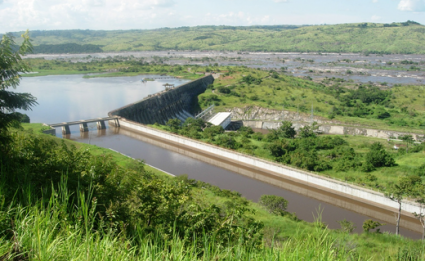 An aerial view of the existing semi-functional Inga dam on the Congo River. A new dam, the Grand Inga Dam, is being proposed and is currently the world’s largest hydropower scheme.
Credit: flickr/International Rivers

A new $20 billion development to generate a further 4,800MW was announced over the weekend in Paris, with work planned to start in October 2015. According to the DRC government, working with European and other consultants, five further stages at Inga Falls could eventually have a capacity of 40,000MW – equivalent to more than 20 large nuclear power stations.

This would make the complete Grand Inga development the largest hydro project in the world, generating twice as much as the Three Gorges dam in China. In theory, say its backers, it could provide 40 percent of Africa's electricity needs.

The attraction of developing hydropower on the Congo, says the government, is that unlike most of the world's great dam projects, it would not require tens of thousands of people to be relocated, nor would it block the river and result in significant environmental consequences. Because the Congo River around Inga is so vast and falls nearly 100 meters over a short distance, water can be diverted to create a massive new lake without disturbing its main flow.

“The impact on land use is very limited. The development can be progressive and carried out in a series of further phases, eventually providing 40,000MW of power,” says the technical data for the proposed development.

The African Development Bank, World Bank, French Development Agency, European Investment Bank and Development Bank of South Africa have all shown interest in financing the next stage of the project. No developer has been chosen but Chinese, Korean and Spanish companies are said to be in the forefront.

But the prospect of local people getting power from Inga in the next 20 years is remote. Less than 10 percent of the population has electricity, with nearly all Inga 1 and 2 power going directly to multinational mining companies in the Katanga “copper belt.”  It is expected most Inga 3 power would travel 1,500 miles to power-hungry South Africa or large mines in DRC. 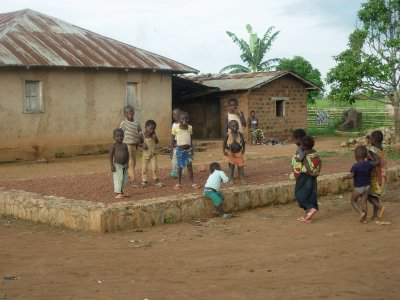 The IEA has found that because of the continent's low population density, grid-based electrification – including through large hydropower projects – is not cost-effective for much of rural Sub-Saharan Africa.
Credit: flickr/International Rivers

Giant hydropower schemes in Africa have a poor track record. “Projects such as Inga 1 and 2 have not unleashed economic development, but have been major contributors to African countries' unsustainable debt burden,” said the U.S.-based International Rivers network, which has led opposition to major dams around the world for 20 years.

In a letter last week to the World Bank president, Jim Yong Kim, the International Rivers and 18 other civil society organizations and networks from Africa, Europe and the U.S. said the reality of large-scale dams seldom matched their expectations, mostly adding to debt problems and allowing powerful companies to cheaply exploit and export Africa's vast natural resources.

According to the groups, the International Energy Agency (IEA) has found that because of the continent's low population density, grid-based electrification – including through large hydropower projects – is not cost-effective for much of rural Sub-Saharan Africa.

The letter said: “Renewable energy solutions such as wind, solar and micro hydropower projects are much more effective at reaching the rural poor.

“According to the IEA report, 70 percent of the world's unelectrified rural areas are best served through mini-grids or off-grid solutions.

“In the DRC, the World Bank and other financiers have invested billions… in the construction and rehabilitation of the Inga 1 and 2 hydropower projects and associated transmission lines over the past 40 years.

“After all this investment, 85 percent of the electricity in the DRC is consumed by high-voltage users, while only 6-9 percent of the population has access to electricity. We are concerned that the bank's proposed focus on large hydropower projects will write off electricity access for the majority of Africa's poor.”