The U.S. coal industry took a hit this week when the state of Oregon created a roadblock to a major proposed coal export terminal, which in the end, would allow Wyoming coal to be shipped to power plants in Asia.

At the same time, a new Duke University study was published saying that coal shipped to South Korea from the Oregon coal terminal, if it were to be built, would lead to a 21 percent drop in greenhouse gas emissions compared to burning the coal in the U.S. That’s largely because of the U.S. switching to natural gas for power generation and the high efficiency of South Korean power plants.

The Oregon decision involved what would be, if built, a fairly small player in coal exports. The proposed Morrow Pacific Terminal on the Columbia River would ship up to 8 million metric tons of Wyoming Powder River Basin coal to Japan, South Korea and Taiwan annually. The Oregon Department of State Lands on Monday denied Ambre Energy’s permit to build the terminal because the agency said the terminal posed too much of a threat to the river and its fisheries.

If Morrow Pacific is never built, the ability of the U.S. to export its coal would take a hit, study co-author Dalia Patiño-Echeverri, a Duke assistant professor of energy systems and public policy, told Climate Central.

“This project would have increased current U.S. coal exports by 7 percent, so its denial has a significant impact,” she said. “In the short term, this situation increases the financial risk of the permitting phase of coal-export projects and rises the cost of capital for such investments.”

But what the possible downfall of that terminal means for global greenhouse gas emissions from burning that coal overseas isn’t clear. That’s partly because there is disagreement about whether blocking new coal export terminals, which environmental groups have vehemently opposed partly on climate-related grounds, will result in an overall decrease in greenhouse gas emissions from electric power generation.

Ambre Energy, which had already been granted air and water quality permits by the state of Oregon, did not respond to requests for comment, but American Coal Council Associate Director Jason Hayes said Wednesday he expects the company to appeal Oregon’s decision.

Two larger coal export terminals are in the permitting process in Washington State: The Millennium Bulk Terminals Longview project in Cowlitz County, Wash., would export up to 44 million metric tons of coal annually, and the 54 million metric ton Gateway Pacific Terminal is proposed for Cherry Point, Wash., near Bellingham.

The coal industry says the proposed terminals are critical for U.S. coal to get to Asia, especially to South Korea, which imported 80 million tons of coal in 2013 and is expected to increase its demand, Hayes said.

“They could have taken every ounce of coal coming through there,” Hayes said of South Korea. “There’s definately demand there.”

But as U.S. coal exports have more than doubled since 2009—and are expected to increase sharply if the new terminals are built—there are worries that U.S. coal-related greenhouse gas emissions are just being transferred overseas as our coal is exported there.

It’s unclear exactly what the impact of domestic coal exports will be on global greenhouse gas emissions because scientists studying the issue say it involves setting parameters difficult to estimate, including coal elasticity, or how coal supplies will be affected by coal prices and other factors, Meredith Fowlie, an associate professor of agricultural and resource economics at the University of California-Berkeley, wrote in a blog post on the Berkeley Haas School of Business website in July.

Fowlie, who could not be reached for comment, pointed to a report by the CO2 Scorecard Group released in March showing that while U.S. CO2 emissions have dropped as the country has turned more and more to natural gas for electric power production, U.S. coal exports have increased. 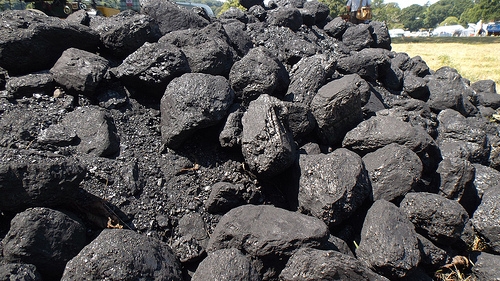 A pile of coal. Credit: Oatsy40/flickr

Switching to natural gas from coal in the U.S. avoided 86 million tons of CO2 emissions between 2007 and 2012, but those were more than offset by U.S. coal exports burned overseas in that time, which released an estimated 149 million tons of CO2, according to the report.

For a different perspective, Fowlie pointed to research by Frank Wolak, director of the Program on Energy and Sustainable Development at Stanford University, which suggests that U.S. coal exports to China and other Asian countries might end up reducing overall greenhouse gas emissions.

The thinking goes like this: Asia’s demand for coal will continue to grow as it builds new coal-fired power plants, increasing demand for low-sulfur U.S. coal and causing coal prices to rise, which in turn will encourage U.S. utilities to continue their switch to cheaper natural gas for electricity generation. That will theoretically reduce greenhouse gas emissions in part because coal will be burned more efficiently in new Asian power plants while U.S. utilities burn cleaner-burning natural gas to produce electricity.

“We have very low-sulfur, high BTU-content coal that is less-polluting than a lot of the coal that is being burned in a lot of the world (in countries) that are rapidly increasing coal consumption,” Wolak told Climate Central. He said that the only way to truly slash greenhouse gases from power plants is to attach a price to carbon and invest in carbon capture and storage projects that keep coal plants operating while making their emissions environmentally benign.

So, what’s the bottom line for U.S. coal exports and greenhouse gas emissions?

Fowlie wrote that the issue is too complex to say for sure how coal exports will affect global greenhouse gas emissions, which means a lot more research needs to be done in that area.

For Wolak, the bottom line is that coal is going to be burned overseas anyway, it’s really just a question of where it comes from.

“I think that it’s hard for me to imagine how you keep coal in the U.S. from getting out of the U.S.,” he said.

Finding a solution to climate change and the greenhouse gas emissions fueling it isn’t really about quitting coal, it may be about making it less harmful, he said.

You May Also Like
Bike Sharing: How Climate Friendly Is It?
Picture This: Twin Waterspouts and Amazing Aurora
What’s Behind Super Typhoon’s Rapid Intensification?
Planet is Running a Temp: State of the Climate 'Check-Up'