Obama at Summit: ‘We Have to Answer the Climate Call’

By Brian Kahn and John Upton

Desperate warnings from world leaders and celebrities about the consequences of unmitigated climate change filled the General Assembly Hall at U.N. Headquarters in New York on Tuesday morning, as a daylong climate summit began.

“Climate change is the defining issue of our age,” U.N. Secretary General Ban Ki-moon said in his opening remarks. “Our response will define the future. To ride this storm, we need all hands on deck. That’s why we are here today. We need a clear vision.” 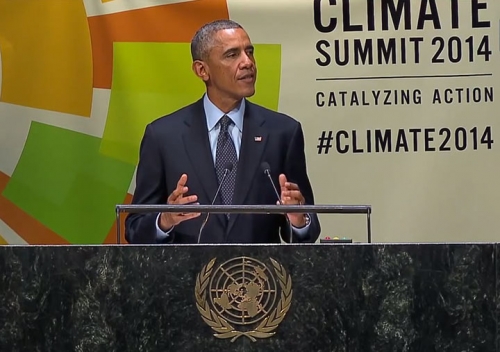 The speech was warmly received and applauded, but the day's true headliner was U.S. Pres. Barack Obama, whose pledges and calls-to-action triggered cheering from other countries' delegates. During an early afternoon speech, Obama announced that he would sign an Executive Order requiring U.S. agencies to consider climate change and climate resiliency when making foreign development decisions, and to globally share U.S. knowledge, data, tools and information that could help other nations and communities brace for climate change.

Perhaps more significantly, Obama made it clear that the U.S. is committed to climate action and that it wants to cooperate with other countries in finalizing a meaningful global climate treaty. The final negotations for a new treaty, which would take effect in 2020, are scheduled to be held in Paris late next year. The agreement would be the first truly global climate treaty since the Kyoto Protocol was finalized in 1997. That treaty, which took effect in 2005, was conspicuosly never ratified by U.S. lawmakers.

“The climate is changing faster than our efforts to address it,” Obama said. “The alarm bells keep ringing. Our citizens keep marching. We cannot pretend we do not hear them. We have to answer the call.”

Obama said the U.S. recognizes its role in creating the problem of climate change, and that it is working to help combat it.

“There should be no question that the United States of America is stepping up to the plate,” Obama said. “We will do our part and we will help developing nations do theirs. But we can only succeed in combating climate change if we are joined in this effort by every nation, developed and developing alike.”

Ki-moon scheduled the summit during annual General Assembly meetings, giving world leaders a forum in which they could share their plans for reducing greenhouse gas emissions. The summit is being held two days after Ki-moon and hundreds of thousands rallied in the streets of New York and other locations around the globe, joining a People’s Climate March organized to bring attention to global warming.

“By end of this century, we must be carbon neutral,” Ki-moon said. “We must not emit more carbon than our planet can absorb.”

Gore noted that energy from solar is cheaper than coal in 79 countries while de Blasio touted New York's reduction of annual greenhouse gas emissions by 19 percent since 2005.

“Acting on climate is not a choice between the economy and environment,” Gore said. “All we need is political will, but political will is a renewable resource.”

R.K. Pachauri, head of the Intergovernmental Panel on Climate Change (IPCC), laid out some of the science behind climate change. “We have abundant evidence we’re changing our climate,” he said. 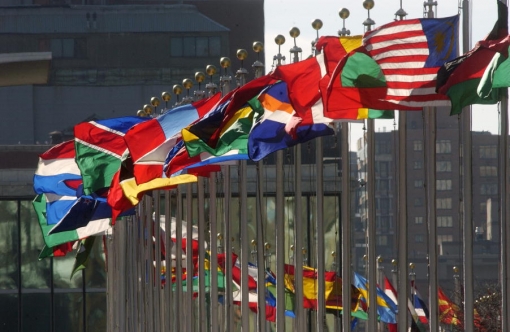 Pachauri echoed Gore’s comments that it’s not an either/or proposition when weighing climate concerns and the economy.

“We’re told limiting climate change will be expensive. It will not. Wait until you get the bill from inaction,” he said.

Pachauri and Gore’s comments reflect recent findings published in a report last week by a group of international economists that showed reducing greenhouse gas emissions would be cheaper than inaction.

Beyond the economic arguments, a number of speakers highlighted the massive demonstration in New York as a sign that popular opinion is shifting toward solving climate change.

“The people made their voices heard,” DiCaprio said. “This isn’t just about telling people to change lightbulbs or drive an electric car. This is about asking governments and industries to take large scale action.”

DiCaprio was recently appointed a U.N. Messenger of Peace and has been outspoken on climate issues.

Following the opening remarks, heads of states and other national leaders split into groups to share their “national action and ambition announcements.” Developing and poor countries were nearly united in calling on developed countries to do more to reduce their climate-changing pollution emissions and to help them adapt to the changing climate.

Bolivia president Evo Morales, for example, expressed his “concern” about a “lack of commitment by developed countries” to take larger strides toward reducing their carbon footprints.

Notably, many of the nations who spoke early on Tuesday also called on the biggest greenhouse gas-emitters to tackle global warming. Of the world’s three biggest overall climate polluters, two are fast-developing countries — India and China.

And some of the early addresses by the leaders of small and developing countries included pledges to reduce their own greenhouse gas emissions rates. Brazil said it would continue working to reduce deforestation. Costa Rica reiterated its commitment to become “carbon-neutral” by 2021. Fossil fuel-rich Brunei, meanwhile, outlined a less ambitious target — an electricity supply that includes 10 percent renewables by 2035.

“The costs involved in tackling climate change are high, but the benefits are worth the efforts,” Brazil President Dilma Rousseff said. “We must reverse the logic that fighting climate change is harmful to the economy.”