Climate Could Spell the End for the Cutthroat Trout

Any Montana angler worth a double-haul cast knows that the iconic state fish, the westslope cutthroat trout, has been crowded out by the non-native rainbow trout, first introduced to these rivers by well-meaning sportsmen in the 1880s. 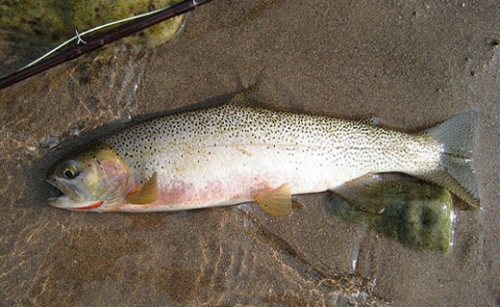 Now those invaders are taking over the cutthroat's gene pool, too.

A new study tracks just how rapidly cross-breeding between the two species has accelerated in the past 30 years. Its invasive hybridization driven by climate change, and it could spell extinction for the ruby-throated native fish of the Big Sky state.

The study has importance far beyond Montana: It provides what the researchers believe is the first empirical evidence of how global warming is promoting invasive hybridization.

“Climate change is going to affect biodiversity worldwide in a number of ways, and now it's clear that invasive hybridization is one of them,” said Clint Muhlfeld, aquatic ecologist for the U.S. Geological Survey and lead author of the study published Sunday in Nature Climate Change.

The team focused its research on the Flathead River, a relatively pristine watershed in the state's northwest reaches. More than 20 million rainbow trout were stocked in the Flathead from 1889 to 1969, when the state largely stopped stocking non-native fish in its streams. But hybridization did not emerge as a widespread threat. Genetic testing in the 1970s and 1980s showed that hybridization was limited to just one downstream population in the river system. 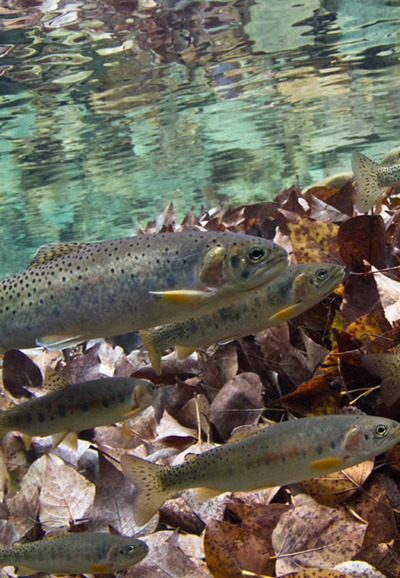 The study provides what the researchers believe is the first empirical evidence of how global warming is promoting invasive hybridization.
Credit: Jonny Armstrong/USGS

New sampling shows hybridization has since spread rapidly upstream, to the point where half of previously pure populations are now hybridized. Known populations of genetically pure cutthroat now occupy less than 10 percent of their historical range. Stream temperature and precipitation analysis shows climate change has driven the cross-breeding.

The decades of stocking Montana's rivers with rainbow trout – the world's most widely introduced invasive fish species – amounted to “essentially a time bomb, waiting to go off in the right set of environmental conditions,” Muhlfeld said.

The study underscores the uncertain future for a fish first described in the journals of the explorers Lewis and Clark, a historical significance memorialized in the species' scientific name, Oncorhynchus clarkii lewisi.

The findings are particularly alarming because the Flathead River had been considered a stronghold for genetically pure populations of westslope cutthroats, sought out by anglers who venture into these wild reaches.

In Montana rivers east of the Continental Divide, the native species has all but disappeared. In the famous trout streams here, long-time Bozeman, Mont. fishing guide Dave Kumlein said most anglers are simply focused on the abundant rainbow and brown trout.

“Climate change is going to affect biodiversity worldwide in a number of ways, and now it's clear that invasive hybridization is one of them,” said Clint Muhlfeld.
Credit: Noah Clayton/USGS

Both non-native fish have now developed as wild, self-sustaining populations. The westslope cutthroat are relegated to the upper reaches of tributaries, not the main stems most popular for fishing. In rivers like the Madison, “I don't think that the average angler would notice” the loss, Kumlein said.

Any effort to remove the non-native rainbow and brown trout in these areas would be “nearly impossible – Herculean, expensive, and unpopular,” Kumlein said. “The horse is out of the barn.”

But Kumlein says he recognizes the importance of Montana's efforts in recent years to restore populations of pure westslope cutthroats, especially in areas where natural barriers like falls can keep invaders out. “Whenever possible, if we can provide refuge for these native species to help them recover or restore them, I'm all for it,” he said.

Intervention efforts will be important for the future of Montana fishing, noted Muhlfeld, who worked with scientists from the state Department of Fish, Wildlife, and Parks and the University of Montana on the climate change research. The fitness of the species – and its resilience to environmental changes – declines with hybridization, he said.

Threat to Other Species

It's the same issue faced by species around the world: Climate change is going to exacerbate stressors like habitat loss and invasive species, said Muhlfeld.

“The cutthroat's genes and these gene complexes are linked to local adaptations that have allowed these fish and organisms to survive and persist for thousands of years,” Muhlfeld said . “Hybridization breaks down, or jumbles up, these gene complexes linked to when the fish spawn, how they move. So over time, if we allow it to proceed, it decreases the ability of that species to be resilient and adapt in a warming climate.”