The broiling heat wave that suffocated parts of India with temperatures regularly above 110°F at the end of May — and killed around 2,000 people in just a few days according to estimates — has finally waned. But the deadly episode has focused world attention on the plight of vulnerable populations during such extreme events and raised questions about how to better prepare for such disasters when the climate could be tipping toward more of them. 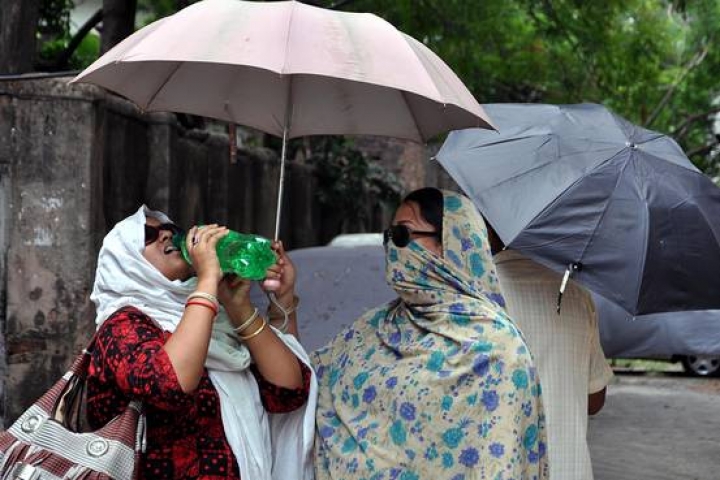 While India is no stranger to heat waves this time of year, before the monsoon kicks in and brings relief with its rains, this event was notable because it has been so lethal so quickly. The severity of the event came from a deadly combination of meteorology, possibly with a boost from climate change, and highly vulnerable populations.

Such oppressive heat waves are likely to become more common in a warming world. That is one of the more robust links in climate science, but teasing out such a connection with specific, local events can be difficult, as a new analysis from scientists working with Climate Central, as part of its World Weather Attribution program, shows. The program combines observational data, output from multiple models, peer-reviewed research, and on-the-ground reports to more quickly analyze extreme weather events. This analysis found some suggestions that extreme heat waves in this region are more common than they once were, but more research is needed to firm up such a link.

Beginning in mid-May, parts of the states of Andhra Pradesh, Telangana — home to about 80 million people — and other nearby areas saw temperatures soar up to about 120°F during the days and linger in the 80s and 90s during nights, leaving little chance for the millions of residents of the region to gain relief. Those who work primarily outdoors, such as construction workers, along with the very young and old, and the poorest are at particular peril during such events, having little recourse for relief from air conditioning or plentiful clean drinking water.

The weeks before the typical early June start to the monsoon are usually the warmest of the year in much of India. Temperatures in the early part of May this year were actually below normal, according to the Indian Meteorological Department, thanks to frequent rain showers. But when that rainy weather came to a halt, it led to a “sharp and abrupt rise in maximum temperatures,” an IMD statement said.

The particular atmospheric setup for the event happened because the mass of hot, dry air that normally extends over the western part of the country at this time of year shifted much further to the east than it normally does, with winds pulling in warm air from over Pakistan. The dryness of the air helped temperatures skyrocket further under a blazing sun, as dry air heats faster than moist air. Coastal areas did see more humidity and saw much higher heat indexes  — or what the temperature actually felt like — than inland areas. In Mumbai, according to news reports, the temperature one evening only dropped to just under 110°F. Human bodies are better at surviving under higher temperatures when the air is dry than when it is humid, so those places that also saw high humidity were even more unbearable.

It is expected that extreme heat waves will become more common worldwide as a rising average global temperature, which has increased by 1.6°F since the beginning of the 20th century, tips the odds more in their favor.

Because this link is one of the most robust between climate change and extreme weather the budding field of extreme event attribution has focused much attention on trying to pinpoint what role warming may have played in particular events. One of the first attribution studies came in 2004, and found that warming made the heat wave that hit Europe in 2003 and killed some 70,000 people at least twice as likely. A study published just last year found that now such a heat wave is 10 times as likely to happen as it was just a decade ago.

India's heat wave: It got so hot earlier this week that roads started showing signs of melting http://t.co/B94oBaI9W4 pic.twitter.com/ocIaiZC2cm

It is likely that the fatalities from this heat wave in India are not a complete count of the numbers of deaths it caused, as heatwave deaths are generally underreported, particularly in developing countries, said Maarten van Aalst, director of the Red Cross Red Crescent Climate Centre and a lead author of the 2012 IPCC report on extremes.

Scientists working with Climate Central have taken a preliminary look at how warming may be impacting the likelihood of heat waves in this part of India, with mixed results. Geert Jan van Oldenborgh, a climate researcher at the Royal Netherlands Meteorological Institute (KNMI), examined temperature observations in the area going back to 1975 to see if he could find any trends in heat waves. While the average temperature for May had increased over that time, the temperatures of the warmest days and nights had not.

Why one measure showed an increase but the other didn’t isn’t yet known, though van Oldenborgh raised the possibilities that the cooling effect of air pollution or irrigation could be masking any warming signal.

“Other factors than global warming play a role in some areas,” he said. It could also be some other issue with the data that van Oldenborgh has yet to uncover.

If air pollution is playing a role, it is unlikely to hide the background warming signal into the future, especially if efforts are made to reduce such pollution.

Because extreme events, by definition, are rare, there is less observational data to go on to determine how more or less likely warming has made a particular event, said Friederike Otto of Oxford University’s Environmental Change Institute. Because of this, the WWA also plans to evaluate future extreme events with climate models that will compare how often heat waves happen in a global climate with or without warming.

The likelihood that these deadly heat waves will become more common in the future, combined with India’s large vulnerable populations raises the need for Indian cities to have plans in place to deal with such events, experts say.

“Raising awareness that this really is a big deal,” Erin Coughlan, a senior climate specialist with the Red Cross Red Crescent Climate Centre said, in particular “because so much of the mortality is preventable” by, for example, providing more access to clean drinking water and opening up designated cooling centers. 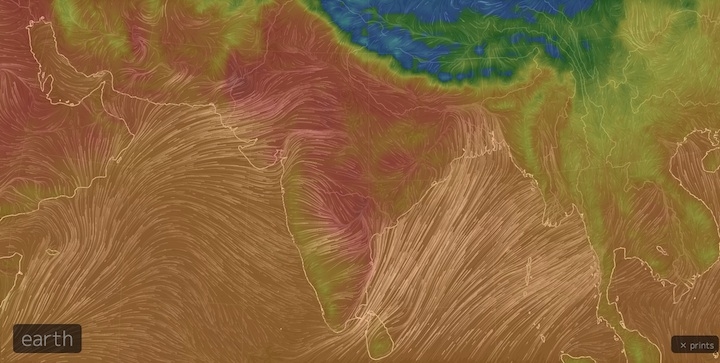 Surface temperatures and wind patterns over India on May 22, 2015.
Click image to enlarge. Credit: earth.nullschool.net

The Natural Resources Defense Council and other experts worked with the western Indian city of Ahmedabad after a heat wave there in 2010 killed an estimated 1,300 people. They helped establish a “Heat Health Action Plan” that helped, among other things, to raise awareness of health risks from extreme heat among citizens and trained healthcare workers to recognize signs of heat stress.

“The 2010 heat wave served as a real wake up call to city officials that coordinated action was needed to prepare for the rising threat of extreme heat,” Meredith Connolly, who worked on the NRDC project, said in an email.

Scientists also worked to develop a forecast system that could alert city officials to impending high heat days several days out, as opposed to the only one or two days that the IMD could forecast such events.

Now in its third year, the plan “has been effective at increasing awareness on the dangers of heat waves, disaster risk management, and climate change in Ahmedabad,” Connolly said. Now other cities in India are showing interest in developing their own plans, which raises hopes that the issue is becoming increasingly recognized as a key threat to Indians in the future.

“Scientists have been ringing the alarm bells that heat waves will become more frequent and intense due to climate change,” Connolly said, “and the general consensus in India recognizes that rising threat.”

Editor's note: This story has been updated to correct the number of deaths from the 2010 Ahmedabad heat wave. It was about 1,300 people, not 3,000.

You May Also Like:
In Stunning Reversal, ‘Big Oil’ Asks for Carbon Price
Halfway There: Countdown to Paris Climate Talks
Drought Takes $2.7 Billion Toll on California Agriculture
Burning Coal Is Hot; Its Warming Is Far Hotter