Climate Change Will Alter the Soil That Feeds Us

London – Global warming may be about to change the ground under our feet – and perhaps not in a good way. It could be about to affect one of the most important communities on the planet: the tiny microbes that make life possible for the rest of creation, according to new research by scientists in the U.S. and Spain. 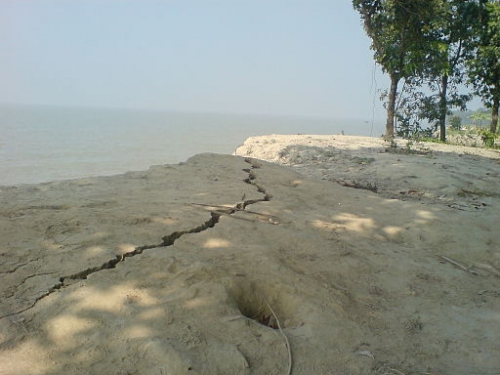 Soil – of a sort. Changes to microbial life may affect erosion and fertility of the soil we need.
Credit: Arman333 via Wikimedia Commons

Cyanobacteria are almost everywhere, have been around for the whole of life’s 3.5 billion-year history, and fix nitrogen from the atmosphere to fertilize plants and feed animals.

They are so common, and so numerous, that they form collectives that can be picked up by hand, and be seen even from space. As photosynthesizers, these blue-green algae also deliver the oxygen to keep the animal world on the move.

Ferran Garcia-Pichel and colleagues report in the journal Science that they examined cyanobacteria in desert soils through the whole of North America. They found that two species dominated. One, called Microceleus steenstrupii, lives in the hot deserts while the other, M. vaginatus, prefers cold dry places.

But, of course, the planet is becoming warmer with each decade. “By using our data with current climate models, we can predict that in 50 years, the cyanobacterium that fares better in warm temperatures will push the cold-loving one off our map,” said Professor Garcia-Pichel.

“M. steenstrupii could completely dominate the crusts everywhere in our study area by then. Unfortunately we don’t know much about this microbe or what will happen to the ecosystem in the absence of M. vaginatus.”

The real hazard, for humans and other creatures that depend on cyanobacteria – and that adds up to all life on Earth – is that there is likely to be a knock-on effect on soil fertility, and soil erosion: it is the “living crusts” formed by these microbes that in many places hold the soil together, and sometimes researchers try to combat cases of severe erosion by injecting these cyanobacteria into the dust to act as soil stabilizers. 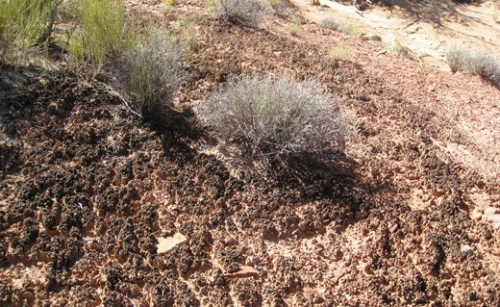 Soil crusts are important members of desert ecosystems and contribute to the well-being of other plants by stabilizing sand and dirt, promoting moisture retention, and fixing atmospheric nitrogen.
Credit: en.wikipedia.org/wiki/Cryptobiotic_soil

The finding is ominous: but an omen of what? Once again, researchers have unearthed – to use an appropriate metaphor – evidence of the intricacy of the connections between air, water, rock, temperature, life and climate.

But this same discovery is a reminder of just how little science yet knows about the microbiology of the world beneath our feet. Before this research, nobody had expected cyanobacteria to have divided the deserts into two separate kingdoms, with presumably two separate ecologies.

“Our study is relevant beyond desert ecology,” says Garcia-Pichel. “It exemplifies that microbial distributions and the partitioning of their habitats can be affected by global change, something we’ve long known for plants and animals. This study tells us we can no longer neglect microbes in our considerations.”