LONDON – Lying in a hot bath may be a pleasant experience, because you can always get out when you’ve had enough. For some of the fish that swim in equatorial seas, though, that is not an option: climate change threatens to make the water not just uncomfortable, but unendurable. 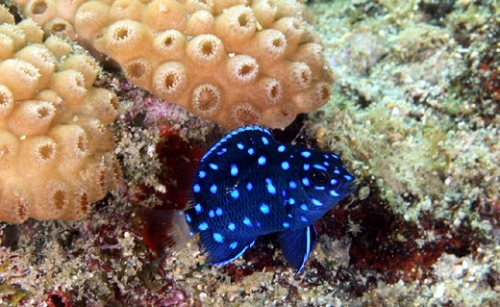 Many species of fish living near the Equator are sensitive to variations in heat and will not thrive in the warmer oceans of the future, scientists in Australia have found.
Credit: Flickr/Kevin Bryant

An international team of researchers based in Australia reports in Global Change Biology that the rapid pace of climate change is threatening the future of some of the fish which live near the Equator.

Over a 14-day period the team tested four species of damsel fish and two of cardinal fish. They say: “Our results indicate that low-latitude reef fish populations are living close to their thermal optima and may be more sensitive to ocean warming than higher-latitude populations.”

“Our studies found that one species of fish could not even survive in water just 3°C warmer than it lives in now”, says the lead author of the study, Dr. Jodie Rummer from the ARC Centre of Excellence for Coral Reef Studies (Coral CoE) at James Cook University in Queensland.

Dr. Rummer and her colleagues studied six common species living on coral reefs near the Equator. She says many species in this region experience only a very narrow range of temperatures throughout their lives, and so are probably adapted to perform best at those temperatures.

The world’s oceans are projected to warm by 2-3°C by the end of this century. “Such an increase in warming leads to a loss of performance”, Dr. Rummer said. “Already, we found four species of fish are living at or above the temperatures at which they function best.”

The team measured the rates at which fish use oxygen across different temperatures – at rest and during maximal performance. The results showed that in warmer water fish lose their ability to perform properly. In the wild this would limit activities crucial to survival, such as evading predators, finding food, and finding the energy to breed. 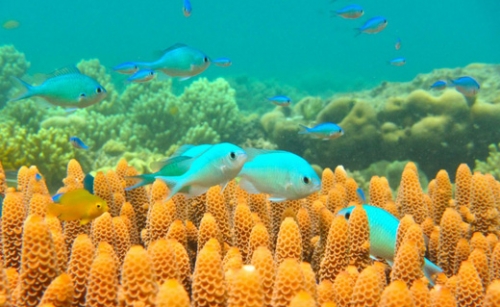 Weaving through the coral: Small fish like these are important sources of food for larger reef species.
Credit: D. Dixson via Climate News Network

With many of the Earth’s equatorial wild populations now living close to their thermal limits, there will be serious consequences if some – like the fish the researchers studied – cannot adapt to the speed at which the oceans are warming.

The response of many species to increasing warmth is to migrate to somewhere that suits them better, which could help to drain the equatorial oceans of fish which play a key role there. Dr. Rummer suggests there will be declines in fish populations as species move away from the Equator to find refuge in areas with more agreeable temperatures.

“This will have a substantial impact on the human societies that depend on these fish,” she says. Many developing countries are in the equatorial zone, and fish are central to the livelihoods and survival of millions of people, including many in Indonesia and south-east Asia.

With rapid climate change, the scientists say, understanding the link between an organism and its environment is crucial to developing management strategies to conserve biodiversity and to allow the sustainable use of marine fisheries. This is especially urgent for ensuring food security for people.