Wildfires Are Burning Some of the World’s Oldest Trees

Northwest Tasmania is home to part of the Gondwana forest. It’s a stretch of primeval-looking temperate rainforest, much like the one found in the Pacific Northwest’s Olympic National Park. Trees more than 1,000 years old tower above ancient ferns, forming a connection to the distant past. It’s why the region has been designated a UNESCO World Heritage Site.

But that connection is being broken by climate change. Fueled by extremely dry conditions that stretch back two years, major bushfires have raged across the region, sending a millenia of history up in smoke. As the world gets hotter and drier, it’s likely that the connection to the past could be even more tenuous. 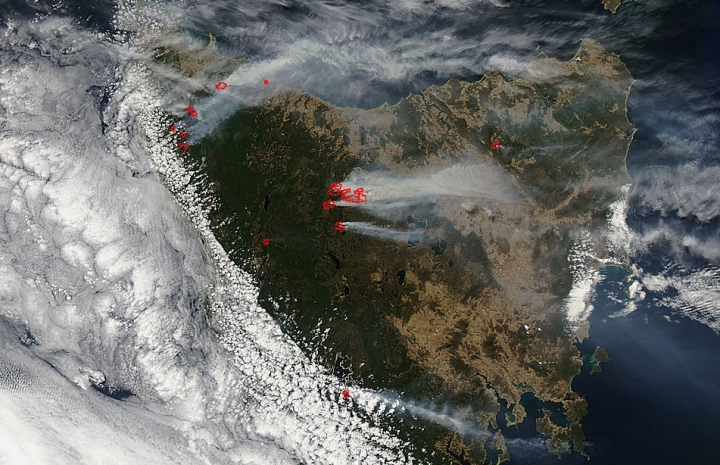 More than 89,000 acres have burned since lightning ignited around 100 bushfires early last week. They were sparked in the wake of the driest spring on record for the region. El Niño likely played a role in that record as the climate phenomenon usually dries out Tasmania and the eastern part of Australia.

However, rainfall deficits stretch back much further. This is the tail end of the driest 24-month period ever recorded in the region where the fires are burning. Since January 2014, up to 47 inches of rainfall has gone missing. That’s the equivalent of half a year’s rain.

There’s also a background signal of decreasing rainfall since 1970 across Tasmania, further impacting ecosystems. Those rainfall deficits both have little to do with El Niño, which only really got ramped up this year.

This is the background that has created favorable fire conditions, the likes of which are rarely seen in a rainforest. Temperatures have been 3.6°F (2°C) above average over the past month, further drying out fuels. It’s all these layers that have created extreme fire conditions in a place known more for extreme rainfall.

Northwest Tasmania is dealing with the most severe two-year rainfall deficit ever recorded.
Credit: Australia Bureau of Meteorology

“I am of the view this is climate change,” David Bowman, a forest ecologist at the University of Tasmania, said in an email.

Because fire is so rare in these temperate rainforests, the trees that live there are ill-adapted to deal with large blazes. So when the current fires lit up, they attacked a forest with few natural defenses, like a bully coming for your lunch money.

When the fires die down to embers, they’ll leave behind a landscape vastly different than the one before it. Trees like the King Billy Pine and fagus — a beech tree and the only winter-deciduous tree in Australia — could be burned out of their range on Tasmania.

Temperatures could rise up to 9°F (5°C) by the end of the century if human greenhouse gas emissions aren’t slowed. That rate would be faster than the climate has changed in at least 65 million years and would leave not just Tasmania but the rest of the world’s ecosystems forced to cope with a radical new normal.