Sexual deceit, pressed flowers and Victorian bee collectors are combined in new scientific research which demonstrates for the first time that climate change threatens flower pollination, which underpins much of the world’s food production. 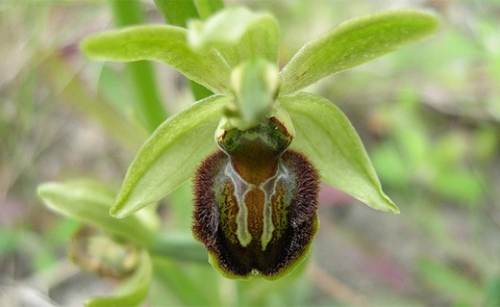 The early spider orchid and miner bee, that depend on each other for reproduction, have become increasingly out of sync as spring temperatures rise, research has shown.
Credit: naturalhistoryman/flickr

The work used museum records stretching back to 1848 to show that the early spider orchid and the miner bee on which it depends for reproduction have become increasingly out of sync as spring temperatures rise due to global warming.

The orchid resembles a female miner bee and exudes the same sex pheromone to seduce the male bee into “pseudocopulation” with the flower, an act which also achieves pollination. The orchids have evolved to flower at the same time as the bee emerges.

But while rising temperatures cause both the orchid and the bee to flower or fly earlier in the spring, the bees are affected much more, which leads to a mismatch.

“We have shown that plants and their pollinators show different responses to climate change and that warming will widen the timeline between bees and flowers emerging,” said Dr. Karen Robbirt, at the Royal Botanic Gardens, Kew and the University of East Anglia (UEA). “If replicated in less specific systems, this could have severe implications for crop productivity.”

She said the research, published in Current Biology on Thursday, is “the first clear example, supported by long-term data, of the potential for climate change to disrupt critical [pollination] relationships between species.”

Three-quarters of all food crops rely on pollination, and bees and other pollinators have already suffered heavily in recent decades from disease, pesticide use and the widespread loss of the flowery habitats on which they feed. In the UK alone, the free fertilization provided by pollinators is estimated to be worth $680 million a year to farmers.

Professor Anthony Davy, also at UEA and part of the research team, said: “There will be progressive disruption of pollination systems with climatic warming, which could lead to the breakdown of co-evolved interactions between species.” 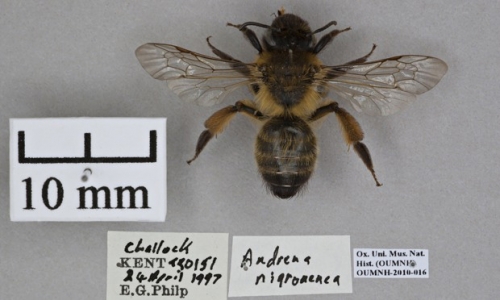 The solitary miner bee is affected more by rising temperatures than the early spider orchid that it pollinates.
Credit:  Oxford University via The Guardian

Scientists have already identified a few timing mismatches caused by global warming between species and their prey. Oak tree buds are eaten by winter moths, whose caterpillars are in turn fed by great tits to their chicks, but the synchronicity of all these events has been disrupted.

Suspected mismatches have occurred between sea birds and fish, such as puffins and herring and guillemots and sand eels. The red admiral butterfly and the stinging nettle, one of its host plants, are also getting out of sync.

The new study focused on the early spider orchid Ophrys sphegodes, found in southern England, and the solitary miner bee species Andrena nigroaenea because they have a very close relationship. Other plants can be pollinated by many insects and other insects can pollinate many plants, making it very hard to determine the effect of changing temperatures.

Another challenge is that the temperature effects can be subtle, meaning data has to be collected over a long period. Robbirt and her colleagues realized that the natural history museums in London and Oxford and Kew Gardens had dated specimens of both the orchid and the bee stretching back to 1848.

Analyzing all the data, and checking it against recent surveys, revealed that the orchid flowers six days earlier for every 1°C (1.8°F) increase in spring temperatures. But the effect on the male miner bee was greater, as it emerged nine days earlier.

The female miner bees, which usually emerge later than the male, emerged 15 days earlier. The latter effect meant the male bees were less likely to visit the orchid flowers for pseudocopulation. “The orchids are likely to be outcompeted by the real thing,” said Robbirt.

The UK government published its national pollinator strategy on Tuesday. It was welcomed by the pesticide trade body, the Crop Protection Association and the National Farmers Union. But Joan Walley MP, chair of parliament’s Environmental Audit Committee, said: “I am disappointed the government seems stubbornly determined to keep open the possibility of challenging the EU ban on neonicotinoid pesticides, which have been linked to pollinator declines.”