Alaska and its neighbor to the east, Canada, have kicked off wildfire season in a major way. Blazes have raged across the northern stretches of North America, sending smoke streaming down into the Lower 48 and leaving the landscape charred.

The multitudes of fires is a glimpse of things to come as the climate warms, but blackened trees are only the most visible concern. The ground beneath them is what has some truly worried, with vast carbon reserves that could contribute to even more warming of the planet if they’re sent up in smoke. 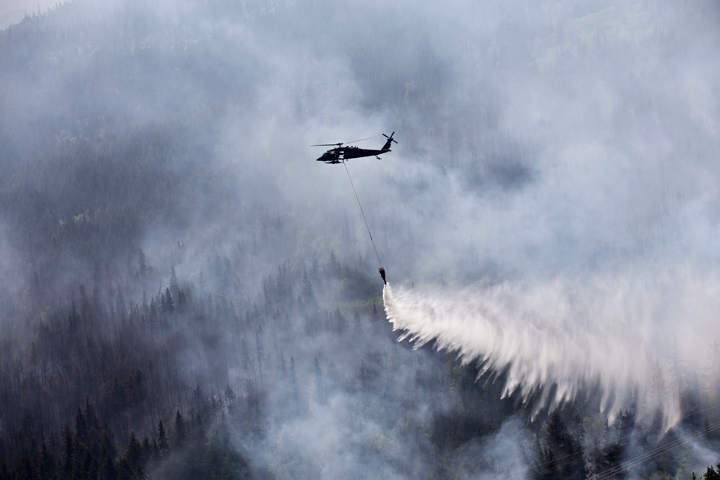 This summer, a number of factors have lined up to make Alaska a tinderbox. A dry winter left little snow on the ground and record heat in May, with the state’s average temperature running 7.1°F above average, melted what little snow there was. Similarly warm conditions stretched across a large portion of western Canada in late May and set the stage for extreme wildfire conditions. Over the period of June 18-24, the Bureau of Land Management lightning network recorded more than 71,000 lightning strikes in Alaska, igniting a large swath of fires.

As the sun comes up on July, 356 wildfires are burning in western Canada and another 297 are active in Alaska. For the year-to-date, wildfires have burned 3.2 million acres in western Canada and 1.8 million acres in Alaska. Both numbers are well above the long-term average and in the case of Alaska, are in record territory for the amount of acreage burned for this time of year. Similar stories have played out in Siberia in 2013 and Canada’s Northwest Territories in 2014.

“The 2015 season here in Alaska is day by day progressing to be a truly outstanding fire year relative to our rather brief historical record of annual area burned (1950 is as far back as I feel provides rather accurate numbers),” Scott Rupp, a fire ecologist at the University of Alaska, Fairbanks, said in an email.

A recent Climate Central analysis shows that over that period, large wildfires in Alaska have essentially doubled, including a large increase since 1990. Wildfire season is 40 percent longer than it was in the 1950s, now stretching 35 days longer. Much of that can be tied to rapid warming in the northern reaches of the globe, which has warmed more than twice as fast as the rest of the planet. In the past 60 years, Alaska has warmed about 3°F with similar warming rates in northern Canada.

Studies have shown that the current rate of burn in the northern forests of the world is unprecedented in at least the last 5,000 years. That makes this start to wildfire season in the boreal forest a punctuation mark on the longer term trend of ever increasing northern wildfires, one that’s expected to continue. 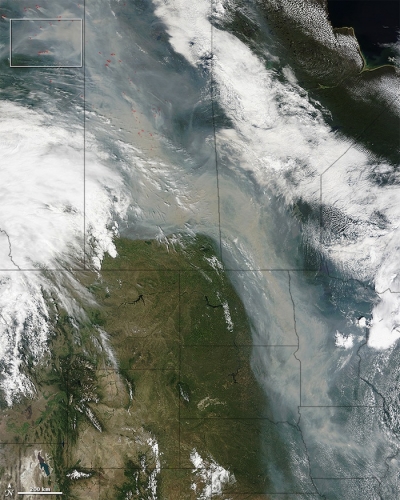 Smoke from fires in western Canada is steered south into the U.S. by the jet stream in a satellite image acquired June 29, 2015.
Click image to enlarge. Credit: NASA Earth Observatory

For all the drama of trees lighting up like matchsticks, it’s what lurks below the forest that could be a major wildcard for future warming. Large reserves of peat make up a large portion of the soil, swamps and bogs in the northern reaches of the globe. Flannigan refers to it as “legacy carbon,” an accumulation of centuries of plant matter that sequesters vast amounts of carbon from the atmosphere.

Despite covering slightly less area than tropical forests, boreal forest soil stores three times as much carbon as its tropical counterpart. They currently operate as carbon sinks, taking up more carbon than they emit each year. Wildfires could flip the script, though, turning boreal forests into sources of carbon emissions as fires burn through the vast reserves of carbon locked in the trees and soil (something already happening in California). If that happens, it could rapidly warm the climate.

“Up until about 10 years ago, the prevailing dogma was peatlands just didn’t burn,” Merritt Turetsky, an ecologist at the University of Guelph, said. “They were way too wet and fire played little to no role in these ecosystems. Over time, we’ve seen that just isn’t true.”

As warming dries out forests and precipitation patterns change, the water table is dropping in once swampy areas. That makes peat susceptible to burning and when it does catch fire, centuries’ worth of carbon can burn up in the span of a few hours if fires are intense enough.

Peat fires are also notoriously resilient, smoldering for days, weeks or even popping up again after a winter of smoldering beneath the surface. Turetsky said it’s akin to throwing a wet log in a fireplace and that she plans to use satellite data to see if fires that scorched the Northwest Territories last summer managed to smolder through the winter and re-emerge this summer.

All that is to say the early drama of this year’s fire season won’t end when the last tree burns. And what lies ahead for this season depends on the rains.

“The big mystery is what will happen with the weather for the rest of the summer. . . if late summer rains don't come this year, we have the potential to far exceed the 2004 fire season,” Rupp said.

You May Also Like:
Soaring Temps in Pacific Northwest Shattered Records
Study: Water Use Skyrockets as Fracking Expands
The U.S., Brazil and China All Set Major Climate Goals
Water Use Declining as Natural Gas Grows