Basking Ridge, N.J. is a quintessential small town. It’s the type of place where red, white and blue bunting gets draped on storefronts on the main drag during the Fourth of July and carolers wander the streets with hot cocoa in December.

Like all good small towns, it has a defining feature. Or at least it did. This summer, heat stress and heavy rain conspired to fell a 600-year old oak tree at both the town’s literal —  the tree sits at the point where West Oak Street turns into East Oak Street, hanging over the Presbyterian Church’s graveyard — and cultural center.

The town flag features twin oak leaves in an homage to the tree, which is rumored to have provided shade for a picnic between George Washington and General Lafayette, and guarded the final resting place of Betsy Ross. It survived countless hurricanes, hot spells, cold spells, dry spells and wet spells until searing heat followed by deluge finally sapped its will to live. 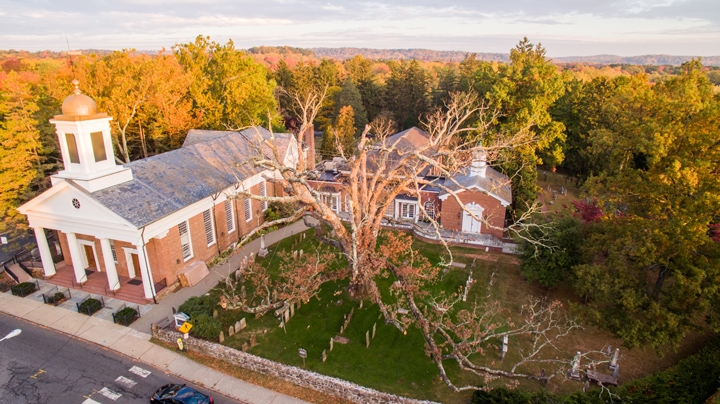 Basking Ridge's iconic white oak tree next door to the Presbyterian church that's been its neighbor for almost 300 years. The tree is estimated to be 600 years old.
Credit: Ted Blanco

“It’s been here since before any of us or any of our ancestors were on the scene,” said Jon Klippel, a longtime Basking Ridge resident who chairs the planning council at the church. “If you were able to go back and pull some survey maps when they first determined they would put a church house here in Basking Ridge in 1717, this thing was on the maps. It was a landmark even back then.”

Since announcing that it had died and would be cut down next year, Klippel said there’s been an outpouring of support and grief as well as more than a few tears shed as the community deals with losing a fixture that’s been around for centuries.

What precipitated the oak’s rapid decline was a two-week stretch when the average temperature was higher than 90°F in late July. The heat stress made the tree’s pores essentially go on lockdown during the hot, dry period to keep its water availability up. Unfortunately the stretch of hot weather was followed by two separate days where heavy rain fell in mid-August.

Rob Gillies, an arborist in Basking Ridge who has tended to the tree, told the New York Times that “the roots were soaking because it couldn’t process the water,” ultimately dealing the fatal blow.

Climate change likely played a role in increasing the likelihood of the type of heat that led to the tree’s demise. To examine if the odds have changed for this type of heat event, members of Climate Central’s World Weather Attribution team culled through data from a weather station at Canoe Brook — at 10 miles away, the closest long-term weather station to the oak — that has records dating back to 1931.

A historic postcard from the early 20th century shows what the oak tree looked like in healthier days.
Click image to enlarge. Credit: The Historical Society of Somerset Hills

When recordkeeping began at the station, a 15-day stretch of similarly sweltering days occurred once every 27 years on average. In 2016, the odds increased to 1-in-4 years on average, a nearly sevenfold increase. Other weather stations nearby show similar trends of extremely hot weather becoming more common.

“This (analysis) can show that there was a trend, but not what caused the trend,” said Geert Jan van Oldenborgh, a climate scientist at the Royal Netherlands Meteorological Institute who did the analysis. “I know of only one cause for 100-year trends so it is a fairly safe bet that it was caused by the CO2 emissions, but it has not yet been formally shown that this is the case.”

In mid-October, with a riot of colors on the trees around it nearing their peak, Basking Ridge’s white oak had a few measly patches of brown leaves clinging to its branches. The brown leaves had appeared more than two months earlier at the start of August. By Aug. 14, the tree’s foliage was completely dead and it was clear something was amiss.

Now, the remaining limbs of the once stately oak are bound together by wire to keep them from falling and crushing the centuries’ old headstones or anyone happening to wander through the ancient graveyard below. The church has indicated the tree will officially come down in July 2017 — its 300th anniversary, no less — and the wood will be used for a to-be-determined project to honor the tree’s life and history.

As with any symbol, it’s a bit of a challenge to separate fact from fiction. The 1410 birth year, for example, is based on a book published in 1717. The tree was filled with 3 tons of modified concrete in 1924 making it nearly impossible to get an exact estimate of its age. (Also for reference, the tree’s branches spread 125 feet from its center at that time.)

But even if the purported 600-year age is off by a bit, there’s no doubt the oak tree is pretty old and its loss is a major blow not just for the town but for old-growth forest aficionados across the region. 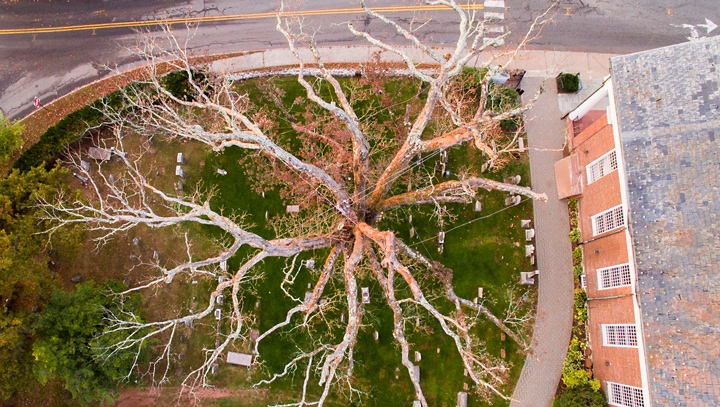 The Northeast was heavily logged following European settlement, with trees being felled for firewood, construction or clearing land for farms. As a result, only a few truly ancient trees remain in the region, but Basking Ridge’s oak stands out even among its fellow multi-centenarians.

“There are also a few old-growth oaks growing in remote areas in West Milford, N.J., that date back to the 1500s,” said Nicole Davi, a tree ring expert at William Paterson University. “These don’t look anything like the stunning oak tree in the news right now. These are gnarly and stunted looking, likely why they were never logged to begin with.”

How these reminders of a pre-colonial Northeast do in a warming world remains to be seen. Daniel Druckenbrod, a tree ring and forest modeling researcher at Rider University, said oak forests could actually thrive in the region as the climate warms and rainfall patterns change. Other factors like pests, diseases and changes in animal and bird species are wildcards that will also help determine what future forests look like.

“Combined with the ongoing changes in species interactions, it's difficult to know though how effectively trees will be able to respond to these changes in habitats,” he said.

Basking Ridge’s oak tree is a reminder that nothing is insulated from the impacts of climate change or the other ways humans are altering the planet. Though the tree’s legacy will live on through whatever the church decides to do with its wood, the town and congregation are losing a physical reminder of existential life lessons.

“For every minister that’s occupied the pulpit, you had that tree right outside the window, readymade for a sermon,” Klippel said. “Perseverance, patience, continued growth, life and just about anything you wanted to talk about, you could weave in that tree.”