The share of total global electricity production generated by renewable energy is climbing, mainly because solar photovoltaic systems are becoming less expensive, according to a report released Monday by the United Nations Environment Programme and Bloomberg New Energy Finance.

Wind, solar and other renewables, excluding hydropower, were 8.5 percent of total global electric power generation last year, up from 7.8 percent in 2012, the report says. 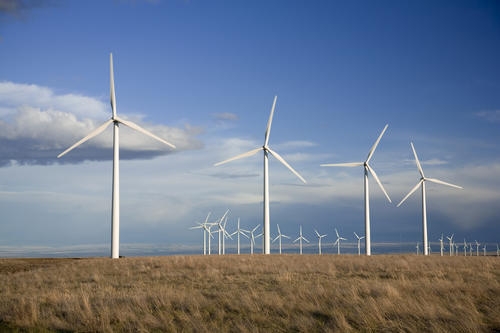 That comes just after Bloomberg and Pew Charitable Trusts issued a report last week saying investments in renewables worldwide has been declining since their peak in 2011, with the U.S. lagging behind China in overall investments in wind, solar and other renewables.

The reports come about a week after the Intergovernmental Panel on Climate Change released the second part to its fifth assessment report, stating with certainty that humans are going to have to adapt to a world enduring climate change caused by greenhouse gas emissions from people burning fossil fuels. Renewables help reduce the climate-changing, energy-related carbon dioxide emissions.

Monday’s report, “Global Trends in Renewable Energy Investment 2014,” released during Bloomberg’s “Future of Energy Summit”  this week in New York City, says that renewables, not including hydropower, accounted for 43.6 percent of total global new electric generating capacity last year, preventing an estimated 1.2 gigatons of carbon dioxide emissions from being released into the atmosphere.

The report shows that there was a 14 percent drop in global investments in renewables partly for the same reason renewables’ market share is growing — the cost of solar panels is falling.

Solar power generating capacity worldwide increased 26 percent in 2013 over the previous year, from 31 gigawatts in 2012 to 39 gigawatts in 2013 despite total investment in solar falling 23 percent from $135.6 billion to about $104 billion, according to the report.

The shale oil and gas boom hit renewables investments hard in the U.S., the report says.

Though the U.S. was the largest investor among developed economies in renewables last year at $33.9 billion, it was down 10 percent from 2012 because low natural gas prices helped bring about the shale gas boom, depressing clean energy development, according to the report.

The shale gas boom also contributes to overall uncertanty about the United States' policy commitment to renewables, the report says. 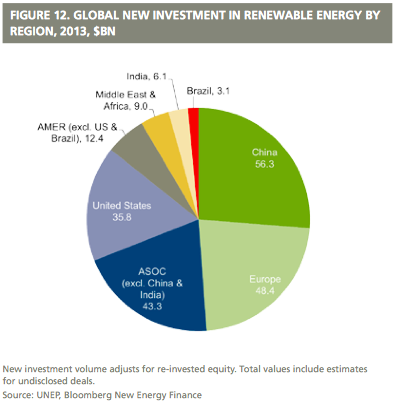 The global renewables picture is more positive, however.

“We’re not seeing anything in any way, anything we can characterize as a collapse in renewable energy investments,” Michael Liebreich, chairman of the advisory board for Bloomberg New Energy Finance, said during a news conference Monday.

He said unsubsidized renewable electric power plants are being built across the globe as they become more able to compete with fossil fuel power generation.

Clean energy stocks had seen a 78 percent decline over four and a half years, bottoming out in July 2012 followed by a 54 percent gain in 2013 as solar and wind manufacturers regained profitability.

“What we’re saying now is that there’s a bit of blue sky on the horizon even though the overall investment numbers are down,” McCrone said, adding that trends in the cost-competitiveness of renewables, particularly wind and solar, are striking.

There are more and more places across the globe where renewable energy is being installed without any subsidy, or the renewables are being installed because they’re cheaper than the available fossil fuel technology, he said.

You May Also Like
U.S. Corn Belt the Most Productive Region in the World?
Tornado Season Is Here: Watches Out Across Mid-South
Tornado Technology Innovation Born From 1974 Tragedy
U.S. Lags Behind China in Renewables Investments