LONDON – The Mackenzie River Basin, a vast globally important area in Canada, is at great risk from climate change and a catastrophic oil spill from the tailing ponds of tar sands mining, according to a panel of nine Canadian, American and British scientists.

The warning came just days after the Canadian Oil Producers Association says it expects oil production from tar sands in the region to double by 2030. 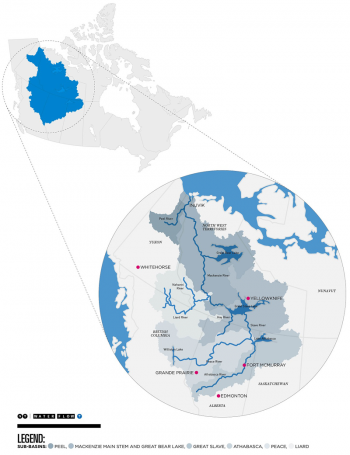 A report produced after a series of hearings last year says effective governance is vital for the river basin, which is five times the size of France. Water pours into the Arctic Ocean from the 1118 mile-long Mackenzie River at the rate of four Olympic sized swimming pools a second.

The watershed’s biodiversity and its important role in hemispheric bird migrations, stabilizing climate, and the health of the Arctic Ocean means it needs protection urgently.

Already the temperatures in the region have increased more than 2°C (3.6°F) as a result of climate change and permafrost areas are melting causing damage to roads, bridges and homes. It is also deforming the ground and changing water flows.

The report says that large quantities of methane trapped in the soil by permafrost are in danger of being released threatening to rapidly increase the rate of climate change.

Glacier cover has declined 25 percent in the last 25 years and in spring snow cover on the Canadian Rockies disappears about a month earlier. The vast area contains 45,000 productive lakes, which also need protection.

The panel, convened by the U.S.-based Rosenburg International Forum on Water Policy, identified the exploitation of the region’s mineral and fossil fuels as a major threat to its biodiversity, the Arctic and a threat to the way of life of the indigenous peoples.

Cutting the forests and the danger to river life from hydro-electric dams needs to be tightly controlled, the scientists say.

The biggest single current threat is the existing tailing ponds on the lower Athabasca River. If a breach occurred in the winter it would be “virtually impossible to clean up because it would disappear underneath the ice and run down through the whole waterway” through Lake Athabasca, the Slave River and Delta, the Great Slave Lake, the Mackenzie River and Delta and as far as the Beaufort Sea.

This would have an unprecedented effect on human societies in the North West territories.

The report – concerned about the financial resources required to deal with a spill -includes a strong recommendation that “extractive industries be required to post a significant performance bond before site development and operations commence.” 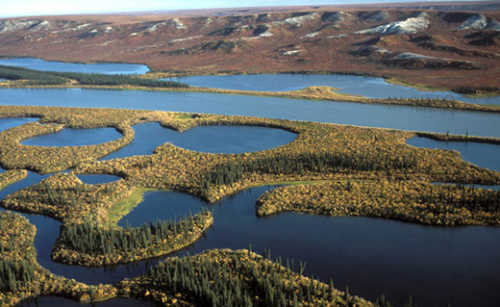 Already the temperatures in the region have increased more than 2C as a result of climate change and permafrost areas are melting causing damage to roads, bridges and homes.
Credit: Terry Parker/Pique News Magazine

“This ensures that cleanup costs and mitigation following closure of the site will be fully paid by the industry itself.”

“Failure to require a significant performance bond or some similar incentive almost surely means that the legacy of despoiled environments, toxic wastes and other waste will continue unabated, and that taxpayers will be left to bear costs that are properly those of the mining industry,” the report says.

Another of the panel’s main findings was that the ecology, hydrology and climate of the region were all at risk and already changing as a result of planetary warming. Careful investigation was needed to try and reduce the effects and dangers. “This is essential to protect the welfare of people locally and to some extent globally,” the report said.

The basin is so large it is administered by three different Canadian states and although there was a Mackenzie River Basin Transboundary Waters Master Agreement of 1997 the Board that was set up to manage it is weak. The Federal Government of Canada should take overall responsibility for the basin and the Board must be strengthened. “A reinvigorated Board will need significantly more financial support and will benefit from the advice and counsel of an independent International Science Advisory Committee,” the report says.

The extractive industries and the impact of hydroelectricity schemes must be carefully controlled.