Breathing Fire: The threat of a destructive wildfire in South Jersey is growing.Is enough being done to prepare?

On a Wednesday in mid-May, on the grounds of one of America’s most highly-rated golf courses, forester Bob Williams stepped out of his truck to snap a picture of the fresh shoots of grass springing up between a stand of pine trees. He needed to immortalize this personal triumph.

Williams manages this thin stretch of forest in Camden County that is sandwiched between a row of homes at the edge of Pine Hill and the Pine Valley Golf Club, which Golf Digest calls the top course in America. His goal is twofold: he wants to keep the forest healthy, and protect the famed course from the risk of wildfire.

Those fresh shoots of grass, rising out of an area that was recently coated in ash, are proof that Williams’ use of prescribed burning—the act of intentionally lighting and controlling a fire—has been successful.

It sounds wildly counterintuitive: To prevent a forest fire, you should first set a whole bunch of other fires.

But across New Jersey, some land managers like Williams have long used prescribed burns as an important tool for their work.

Williams said he first got the green light to burn at the club about 20 years ago, with support from a former club president who was born and raised in Georgia, where the practice is far more common. Every five years or so, the land manager gathers a team, lights matches and fires up drip-torches to burn away the shrubs, fallen logs and other fuel that had grown since the last burn. 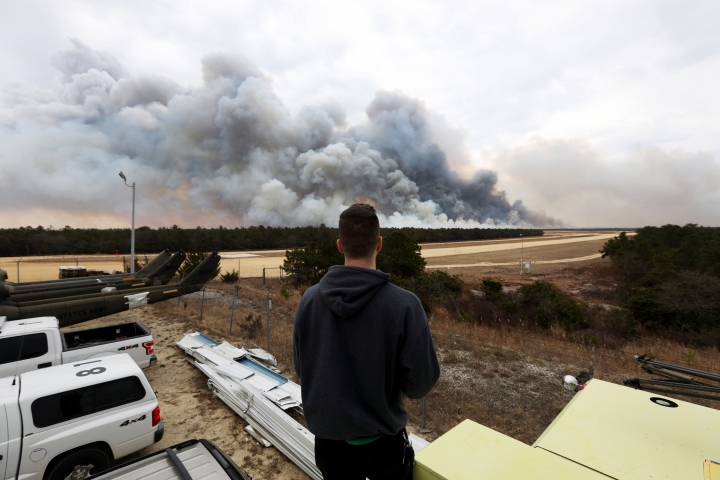 Yet the use of these burns has been unevenly applied and can be difficult to deploy in the state, a combination of relatively burdensome regulations and a limited burning season. Each year, the state has a goal of lighting up 20,000 acres with prescribed burns, according to Greg McLaughlin, the head of New Jersey’s Forest Fire Service.

That might not be nearly enough, though, some experts say. The Pinelands National Reserve—a South Jersey expanse of forests with a long history of fire— spans about 1.1 million acres, or about a quarter of the entire state. Carleton Montgomery, the executive director of the Pinelands Preservation Alliance, said that in an ideal world, that 20,000 acre annual goal would be higher.

In March, a devastating fire erupted there, in a section of Penn State Forest that is known for illegal bonfires. The blaze charred 11,638 acres of the Pine Barrens in Burlington County, making it one of the largest in recorded state history.

Land managers like Williams can’t say if prescribed burns might have prevented the March fire — now known as the Spring Hill Fire — from spreading so quickly. But they are insistent that burns are the best way forward, and could prevent potential disaster.

In the worst case scenario, multiple major wildfires burning simultaneously in South Jersey could stretch the state’s firefighting resources to the limit and put many of the more than 800,000 people living in the Pine Barrens in harm’s way.

The reasons the Pine Barrens are at such risk are multiple. The area has a long history of burning; one written account from 1755 describes a 30-mile-long fire stretching between Barnegat and Little Egg Harbor. And though the Garden State isn’t as fire-prone as California, past fires have brought devastation. During a three-day stretch in April 1963, 37 major fires simultaneously burned in the Pine Barrens, killing seven people and burning 193,000 acres. 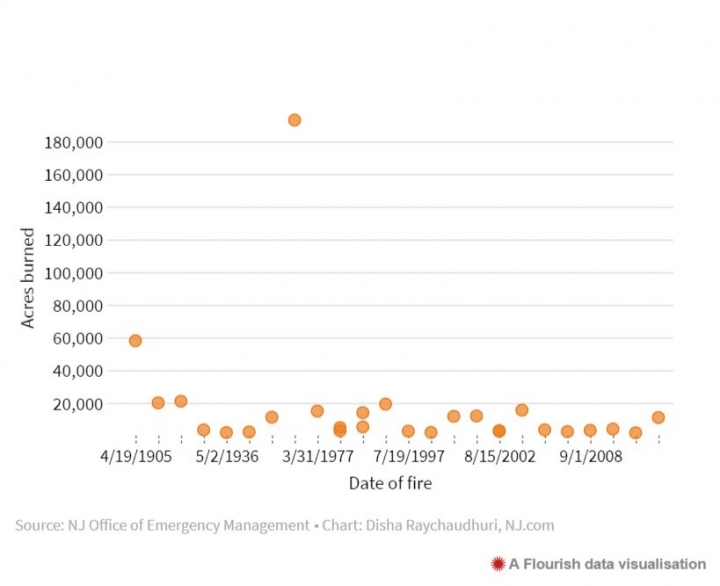 Heat trapped by fossil fuel pollution is increasing the risk of major wildfires nationwide. With some of America’s most rapid rates of warming, the Garden State is no exception.

The Pine Barrens, especially, are accumulating more fuel as they lose trees to pests that thrive in warmer temperatures, and endure more rain and snow that irrigate brush and trees — factors that are amplified by climate change.

And with more fuel, there is a greater chance that a wildfire will balloon in intensity and size after it ignites.

All of that is coupled with human development within the region. The population of people living in cities and towns that are at least partially in the Pinelands increased 132% between 1970 and 2010, according to analysis by the nonprofit, nonpartisan organization New Jersey Future.

“The threat to life and property has never been greater,” said Nick Skowronski, a research forester with the U.S. Forest Service.

All of this becomes particularly dangerous in the early spring, when New Jersey’s fire season is strongest, according to McLaughlin.

That’s the time of year when temperatures rise while trees still remain without foliage. The combination of heat and a lack of shade—along with the blowing winds traditionally associated with March and April—allows for the dead material on the forest floor to dry out, creating a bed of kindling for potential fires, McLaughlin said during a press conference call last month. 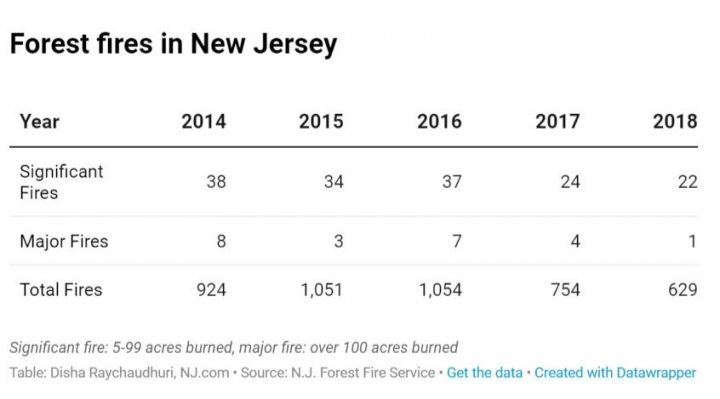 When deployed successfully, a prescribed burn takes away the fuel that wildfires crave, clears out the forest and leaves blackened ground between fire-resistant pine trees. The act diminishes the risk of wildfire in the burn area, and the forest restores itself over the next few years.

As it turns out, the Garden State is actually ahead of many states in its use of the practice. Gov. Phil Murphy signed off on the Prescribed Burn Act last summer, a law that directs state agencies to take steps to facilitate more prescribed burns statewide.

Even though New Jersey has publicly embraced prescribed burning, there are still policies in place that could prevent state agencies and landowners from using the tool more frequently.

Congress designated the Pinelands as America’s first national reserve in 1978, under the National Parks and Recreation Act. The move was celebrated by environmentalists who had long fought against the development of the region, but it restricted how the land could be altered by tools like logging and burning.

Meanwhile, for property-owners looking to light up their land, the process for obtaining burn permits in New Jersey is relatively cumbersome. In Georgia, which is a national leader in prescribed burning, landowners can get permits on the same day they want to burn. In New Jersey, though, landowners must submit a plan to the state and local county at least 30 days in advance, and call in on the day of the burn to ensure conditions are safe.

“Adding a layer of approvals isn’t bad, and it’s certainly in the bounds of what’s reasonable,” said Mark Melvin, a fire manager from Georgia who has helped establish about 30 prescribed fire councils nationwide. “But if you look at it from the 30,000-foot level, every step of authorization you layer on is just another step to actually implement fire on the ground.”

New Jersey trails southern states like Georgia and North Carolina, where forests similar to the Pine Barrens are widespread. In 2018, New Jersey intentionally burned about 12,500 acres of its land, according to data collected by the National Interagency Fire Council. The same year, Georgia singed more than 1.4 million acres of land.

Georgia is, of course, much larger than the Garden State. But land managers who have kept close watch on the nation’s forests say that areas of the Pine Barrens have been overrun by brush because New Jersey has been unable to employ higher rates of prescribed burning.

Crystal Kolden, a fire specialist at the University of Idaho, published a study last week in Fire which found that in the past two decades, non-federal agencies in the Southeast carried out about 70% of America’s prescribed burns. 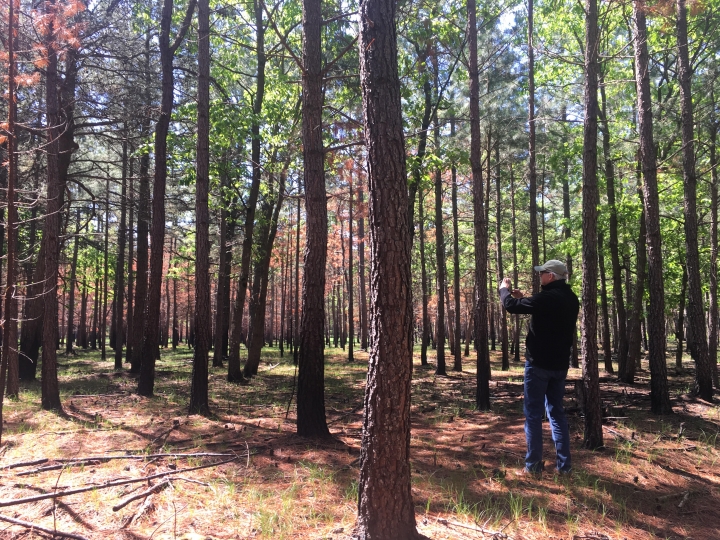 Not everyone sees prescribed burns as the solution to New Jersey’s wildfire threat. Jeff Tittel, the director of the New Jersey Sierra Club, said he thinks the state is already too reliant on burning. In Tittel’s eyes, most of the burning being done in the state serves only to artificially modify the forests in order to boost the habitats for certain species.

Tittel said that if the primary concern really is reducing the threat posed by wildfire, the state would be better served to restrict development in the Pine Barrens.

“I think that if you want to manage fires, in the Pinelands and other areas, keep the people out of them,” Tittel said.

That may be wishful thinking. The growth of communities in and near the forest, particularly at the edge of the Pinelands reserve, is continuing. And as long as that growth persists, many experts think prescribed burning is the best path forward.

“It’s not a technical problem,” said Williams, the forester who uses prescribed burns to protect the golf course in Camden County. “It’s a social-political problem.”