The relentless bitter cold the U.S. East Coast faced during the winter of 2013-2014 is becoming increasingly rare — possibly 20 to 100 times less likely to occur because of warming, a study released Thursday said.

But no warming connection could be found to the repeated snowstorms that painted the East Coast white during that same winter, another study concluded. Instead, changes in Pacific Ocean winds that have also been linked to the so-called “hiatus” in steeply rising temperatures, upped the odds of such a stormy season. 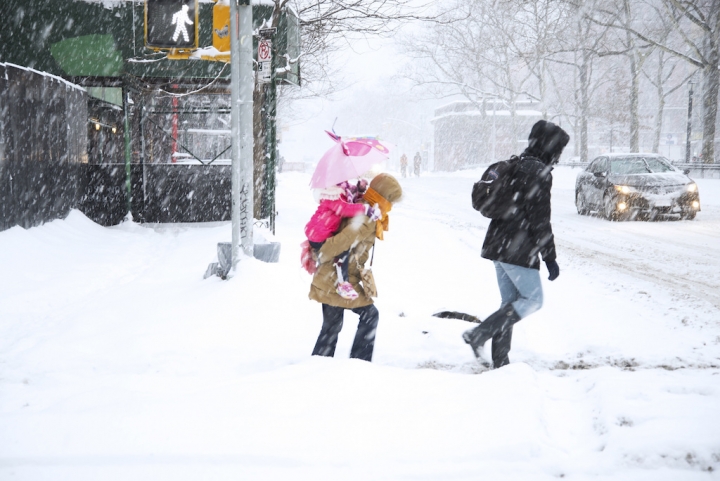 Both studies — along with 30 others — were released as part of a special issue of the Bulletin of the American Meteorological Society focused on climate change attribution. Such mixed results aren’t unusual in attribution science, which seeks to look for the causes, whether climate change or natural fluctuations, that change the odds of extreme weather events.

Three separate studies in the issue focused on the brutal winter the East Coast slogged through in 2014. With climate change deniers saying the cold temperatures contradicted the idea of global warming and some climate scientists suggesting that cold extremes could have a counterintuitive warming link, researchers wondered, “how can we reconcile this idea of global warming with these really extreme cold temperatures?” Laurie Trenary, a postdoctoral researcher at George Mason University and an author of one of the studies, said.

While the lows being hit each day or week that winter weren’t outside of what had been experienced in the historical record, the persistence of that cold across the season, with day after day of below-average temperatures, was notable. That winter was the coldest since 1978-1979 for the Upper Midwest and Great Lakes region, one study noted.

That study, based on temperature records extending back to 1880, found that while such an extreme winter would have been a once-a-decade event for that region back in the late 19th century, it “has become extraordinarily unlikely in the early 21st century” due to long-term warming, the authors wrote.

Both that study and Trenary’s, which focused on the East Coast, looked to see if the relative rarity of the event could be linked to changes in the variability of wintertime temperatures. If that variability was increasing, they would expect to see more extremes at both ends of the temperature spectrum. 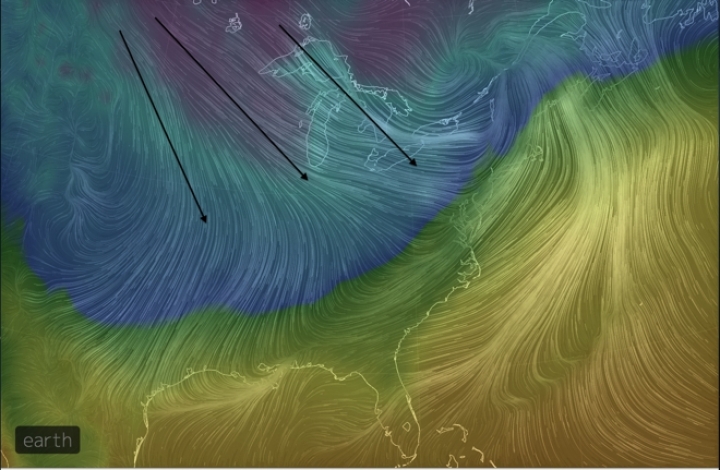 Visualization of surface winds (lines and black arrows) and temperatures (shaded colors) as an Arctic blast headed for the eastern half of the U.S. in January 2014.
Click image to enlarge. Credit: earth.nullschool.net.

While Trenary’s study found a notable decrease in variability in the records, the other study didn’t find a change. Overall, there wasn’t any evidence that warming was making winter temperatures more variable or making such extremes more likely.

The third study, focused on the uptick in storminess, used models that had correctly predicted that increase in advance. Researchers at the Geophysical Fluid Dynamics Laboratory, part of the U.S. National Oceanic and Atmospheric Administration, worked to pull out different factors that could have influenced the chances of such a winter, to see which ones upped the odds and which didn’t.

In doing so, “we didn’t find any evidence that global warming was a big factor,” Gabriel Vecchi, a climate researcher at GFDL, said.

Instead, what seemed to be the main factor that increased the chances of that extreme storminess was a change in winds all the way over in the tropical Pacific. That change led to domino effects in the atmosphere that increased the odds of more winter storms over the eastern U.S.

Interestingly, those same winds are thought to be part of the mechanism burying heat in the Pacific Ocean, leading to the slower pace of rising temperatures at the planet’s surface in recent decades.

The results of the studies show that while asking what role warming played in extreme weather may seem like a simple question, the answers are often messy and sometimes inconclusive.

One key lesson from such studies, though, is that while climate factors may influence the odds of an event, “they didn’t determine that it would happen,” Vecchi said — that’s up to the random chaos of the atmosphere.