Australia’s Bushfires and the Role of Climate Change

Bushfires that started earlier this week in Australia continue to burn around Sydney. The blazes have charred more than 143,000 acres as of Wednesday. Early signs suggest that these fires are in line with what to expect in a warming world, though there’s still work yet to be done to determine the exact connection.

Weather in New South Wales, where the fires are burning, continues to favor fires. Though temperatures are expected to drop a bit after Wednesday’s high of 92°F in Sydney, low humidity coupled with sustained winds up to 25 mph will fan the flames on Thursday. 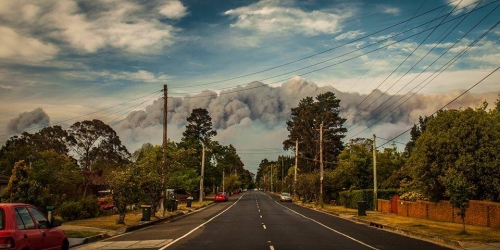 Early estimates put the cost of the fires at $97 million according to Weather Underground’s Jeff Masters, making this the 5th most expensive bushfire in Australia’s history. Those costs could rise given that the most hard-hit areas have yet to be assessed and 64 fires are still burning across the state including 25 that are not contained.

The magnitude of the fires has given rise to questions about the role climate change has played. On Tuesday, Christiana Figueres, head of the U.N. Framework Convention on Climate Change, told CNN that climate change was “absolutely” linked to the fires, though there was still the need for an official study from the World Meteorological Organization.

Figueres’ remarks inspired Conservative Australian Prime Minister Tony Abbott to snipe back that she was “talking through her hat.”

“Fire is part of the Australian experience,” Abbott said.

That’s true in many ways. Fires much larger have scorched Australia in the past, including the Black Friday Bushfire, which burned up to 5 million acres in January 1939 and is considered one of the largest fires on record anywhere in the world. To date, there’s been no direct connection between bushfires and climate change, but that doesn’t mean there aren’t indirect factors to consider now and in the future. 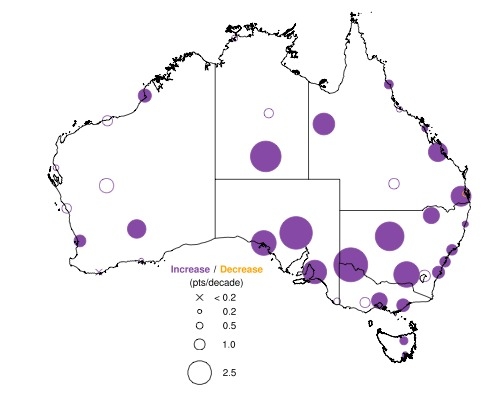 “We may not see a statistically significant signal in terms of actual fires for many decades due to the large year-to-year and regional variability,” said Lesley Hughes, an ecologist at Macquarie University outside of Sydney and member of Australia's Climate Council.

A lot of that variability arises from patterns such as El Niño, which tends to cause dry conditions in Australia’s fall and summer months, and La Niña, which has the opposite effect. Other fluctuations that take place over decades or more add another layer of complexity.

“The southeast of the country has had a long-term drying trend (consistent with expectations from climate models) as well as increases in hot days and heatwaves,” Hughes said. “Both these things contribute to a significant increase in fire danger weather.”

Weather Underground’s Chris Burt noted that most deadly fires occur in late summer and early fall when temperatures are generally hottest. However, research shows that the biggest increases in severe fire weather have come in the spring for much of southern half of the country.

One of the key reasons is warming temperatures. They’ve risen across all seasons but particularly in austral spring, which starts in September. Since 1960, average spring temperatures have risen 1.62°F across the country. Another key factor is relative humidity, which has also decreased the most in the spring.

That’s contributed to a lengthening of the fire season while also increasing its overall intensity. For example, annual extreme fire weather significantly increased at all seven stations analyzed in New South Wales for the period from 1973-2010. The same study found that overall, 24 of 38 weather stations across Australia saw a significant increase. Overall, only one station reported a decrease, though it wasn’t a significant one. 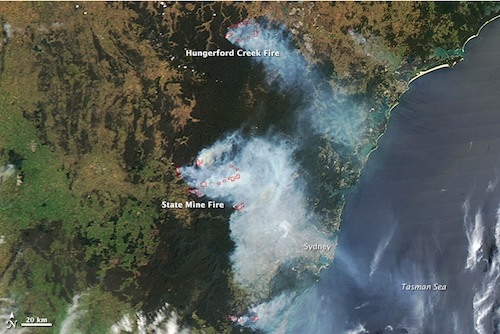 This spring is a prime example of what extreme fire danger weather looks like. The fires burning now come on the heels of the hottest September on record in Australia and during an October which has seen Sydney tie its record for most days above 89.6°F. Australia is also in the middle of its hottest 12-month period since recordkeeping began.

Other research suggest the trends increasing fire weather are likely to continue into the 21st century. In the Sydney region, a drier climate is likely to continue. By 2050, long-term drought coupled with higher temperatures and low humidity could increase the number of days when conditions are ripe for large fires by up to 84 percent. The number of extreme fire danger days could increase threefold as well.

An increase in Australian fires could have global consequences, When forests burn, they can release large amounts of carbon into the atmosphere. Large wildfires around the globe currently emit an estimated 1.45 billion metric tonnes of carbon annually. If they were from one country, that would make them the 7th biggest emitter of carbon in the globe sitting right between Russia and Japan.

In a report to the U.N., Australia’s government estimated that fires in January 2003 accounted for a third of its carbon emissions for entire year. Increasing the odds of wildfire weather could in increase the odds of dangerous climate feedbacks where hotter and drier weather in Australia contributes to more fires that contribute to more warming.

Human actions are the source of the biggest unknown when it comes to Australia’s future bushfires. Global carbon emissions will play a role as lower emissions could translate to less extreme fire weather. However, land management will be equally important in determining local conditions.

In the 1980s and 1990s, Australia committed more land to conservation than previous decades. However, the increase in land didn’t come with a budget increase for fire management. Those factors coupled with warmer, drier conditions could be seen as precursors of major fires that plagued the country in the 2000s.

Hughes said that land management is, “a hotly contested area because the best fire management for species is not necessarily the best one to protect life and property.”

Finding a balance between these sometimes competing interests will ultimately shape what Australia’s forests and how they respond to climate change.