By Douglas Fischer, The Daily Climate

MISSOULA, Mont. – Starving polar bears, icon of the climate change movement, may be able to adapt to an ice-free summer season in the Arctic after all. 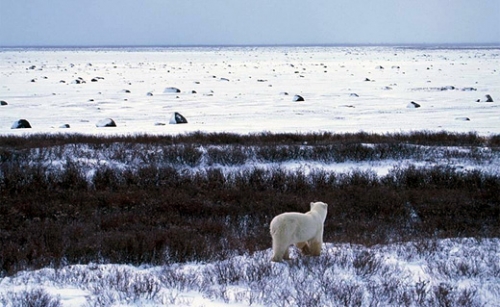 Scientists have long thought that polar bears essentially starve during the summer, living off fat reserves until the sea ice returns and they can venture out to sea to capture their main source of calories: seals.

But polar bears are eating on land as they adapt to a longer ice-free season, according to research shared at the North American Congress of Conservation Biology in Missoula on Monday.

Bears are raiding nests for eggs, grabbing abundant geese, and snagging caribou to make it through a longer summer, said Linda Gormezano, an ecologist at the American Museum of Natural History in New York.

“Unless you've been living under a rock the last few decades, you're aware that Arctic Sea ice is melting, and that this is potentially bad news for polar bears,” she said, adding that until now, the prevailing belief has been that “energy from food on land is largely inconsequential.”

A closer look at bear scat and the sheer number of calories available to bears on land suggest a different picture: “There is enough food,” Gormezano said. “And they eat it.”

Unless you've been living under a rock the last few decades, you're aware that Arctic Sea ice is melting, and that this is bad news for polar bears.  - Linda Gormezano, American Museum of Natural History

The caveat, Gormezano added, is that bears will need to expend less energy catching dinner than they get from the meal. And researchers are not yet certain polar bears – which on ice lie in wait for, rather than chase after, prey – can do so on land.

Historically, polar bears have been stuck on land for four to five months during the summer. But with the Arctic warming faster than any other region on Earth, bears today are trapped on land about three weeks longer than in the 1980s. Based on how quickly Arctic ice is retreating, Gormezano said adult males could be spending half the year on the shore within about 50 years.

Under conventional wisdom, that spells doom for the bear: Bears that have exhausted their fat stores and are near starvation need at least 4,500 calories a day to stay alive. Six months on land would kill off 28 percent of the population even if bears spent that period mostly resting, based on estimates of their fat reserves. If they exert minimal energy – walking about 1.5 miles a day – the death toll jumps closer to 50 percent. 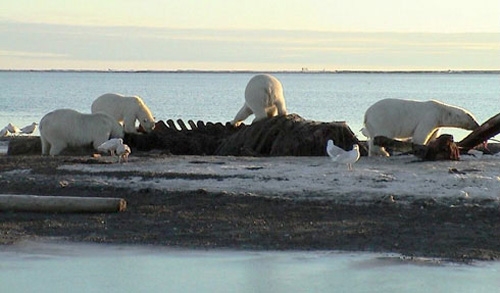 But those models account neither for bears' ability to adapt nor for the smorgasbord available to them on land, Gormezano noted.

An expanding ice-free season also means bears' stay on land would overlap the entire caribou calving season and a good portion of a booming geese population's molt and egg-laying season.

“A lot more food would be available,” Gormezano said.

Over the course of a season, a bear would likely eat a mixed diet. One hypothetical menu: A bear in the “absolute worst condition” could subsist on about 2.5 egg clutches and a gosling or two a day, 47 or so flightless adult geese per season and a handful of caribou.

“This is realistic,” Gormezano said of bears' ability to consume a mixed diet. “We've seen examples from scat samples.”

With geese population exploding across the Arctic, bears are proving adept a both opportunistic feeding and learning from each other, she added. The findings suggest that polar bears may just prove wrong those gloomy predictions about their ability to survive.