By Janaki Lenin, The Guardian

Villagers of the high desert of Ladakh in India’s Jammu and Kashmir states used to harvest bountiful crops of barley, wheat, fruits, and vegetables in summer. 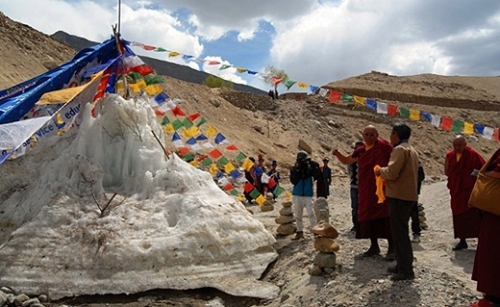 An artificial glacier made in the form of an ice stupa in Ladakh in an effort to help with water shortages.
Credit: Secmol.org

But for years the streams have run dry in spring, just when farmers needed water to sow seeds. They had water when it wasn’t needed during the rest of the year, such as in winter, when Ladakhis let water gush from taps to prevent pipes from freezing and bursting.

To resolve the water-shortage problem, Sonam Wangchuk, a mechanical engineer, and his team of volunteers are building a gigantic vertical block of ice in Phyang, nine miles from Leh, the capital of Ladakh. When spring comes and the artificial glacier melts, farmers will have flowing water.

The ingenious method stores water without the need for concrete water storage tanks or dams. While it won’t stop glaciers from shrinking, it could help people adapt to a warming world.

“It’s difficult to say how many people will eventually benefit. Phyang village has only 2,000 people. But there’ll be enough water for many more. This is an economic as well as ecologic[al] activity.”

Last winter, Wangchuk built a 6-meter prototype on a fully exposed riverbank to test his idea. It stored 150,000 liters of water at 3,170 meters, the lowest altitude in Leh valley. This, he said, proved ice pyramids can be built anywhere in the region.

The frozen cone resembles Buddhist mud stupas, and Wangchuk was quick to come up with a name for them: ice stupa. When the prototype lasted until mid-May, he was encouraged to attempt a 30-meter pyramid of ice this winter.

But the cost of piping water from the Phyang stream, 1.5 miles away, was an exorbitant $100,000. Unperturbed, he raised the money on the crowd-funding platform Indiegogo and work began on January 21.

The site was waterproofed with clay, so when the ice stupa melted, water would not seep into the desert sand. Sprinklers sprayed water from above, and the frigid wind froze the droplets as they hit the ground. A cone of ice built up slowly but steadily.

With only two more weeks of winter left, time is running short. The stupa will likely be no more than 15 meters high when completed, half the size of the planned 30 meters.

“This year was the first time, so there were complications and delays,” Wangchuk told the Guardian. “We wanted to achieve two things – to show how to make a stupa and how to green a patch of desert. We want to create orchards and greenhouses for vegetables.

“It’s difficult to say how many people will eventually benefit. Phyang village has only 2,000 people. But there’ll be enough water for many more. This is an economic as well as ecologic[al] activity.” 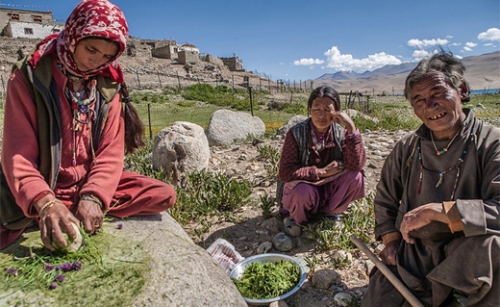 Villagers blame climate change for causing glaciers to shrink by melting them faster than before.
Credit: Sandeepachetan Travel Photography/Flickr

In the coming years, Wangchuk hopes to build 80 to 90 stupas, each more than 30 meters tall, in Phyang village. They’ll store 1 billion liters of water, enough to irrigate 600 hectares (1,500 acres) of desert, he says.

To make so many ice pyramids, the only additional investment is the pipeline. Wangchuk said: “We need more pipes so we can extend it farther and farther. It will take another $100,000 to make the other stupas.”

Once the pipes are laid, frozen ice pyramids can be built year after year without pumping in more money. “The underground pipes will last a hundred years,” he said.

Wangchuk thinks the only way of dealing with the effects of climate change in Ladakh is to build “stupas clubbed with small reservoirs that hold rainwater where it can’t freeze. People say there’s less and less snow, but there’s more precipitation in the form of rain. We need some way of holding water in the high mountains and then form ice stupas. The scope will become smaller if streams have less and less water.”

But for now, the desert around the 3,500-meter-high Phyang will turn green in summer, as water flows for the first time in many years.