No Record, But Arctic Sea Ice Will be Among 10 Lowest

The extent of sea ice covering the Arctic Ocean at the end of the summer season likely won’t surpass the record low of 2012, but 2014 will still likely rank as one of the lowest minimum extents (or areas) in the record books. 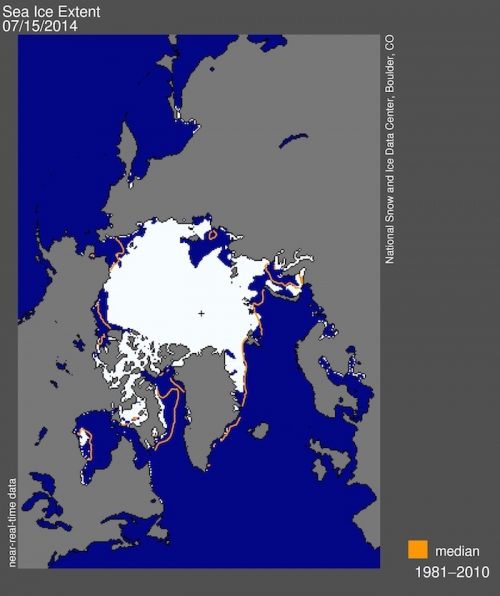 That’s according to Julienne Stroeve, a scientist at the National Snow and Ice Data Center in Boulder, Colo. “It’s likely that it will be among the top 10 lowest,” Stroeve told Climate Central in an email.

Stroeve is one of many scientists who monitor the seasonal waxing and waning of the ice. The annual summer minimum in ice extent has been closely watched as its precipitous decline in recent decades has stood as a stark example of the effects of global warming in the Arctic, which can in turn impact global climate and weather, as well as throwing polar ecosystems out of whack. The Arctic could become seasonally ice-free by mid-century, according to some estimates.

The area of the ocean basin covered by sea ice went on a steep decline in late June and early July, edging toward the low extent it hit at the same time in 2012. But the rate of ice loss has leveled off in the later part of the month, according to daily records kept by the NSIDC. The rate of ice loss tends to slow further in August, as summer draws to a close, making it unlikely that the seasonal low for 2014 will surpass the 2012 record, Stroeve said. However, the amount of sea ice currently covering the Arctic Ocean is still well below the 1981-2010 average.

The shell of sea ice that covers the Arctic Ocean expands and retreats with the seasons, with ice freezing in the cold, dark fall and winter months and melting in the spring and summer as the sun’s rays warm the Arctic. Regional weather patterns also play a role. For example, areas of high pressure in the atmosphere tend to cause further warming and melting in the summer, and Arctic storms tend to break up the ice, spreading it out.

Over the past few decades, human-induced global warming has juiced the natural cycles, causing increased ice melt that has driven the extent of sea ice to reach both record low maximums and minimums. (The seasonal maximum usually occurs in March, at the end of the winter freezing season, while the minimum is usually reached in September, at the end of the summer melt period.) 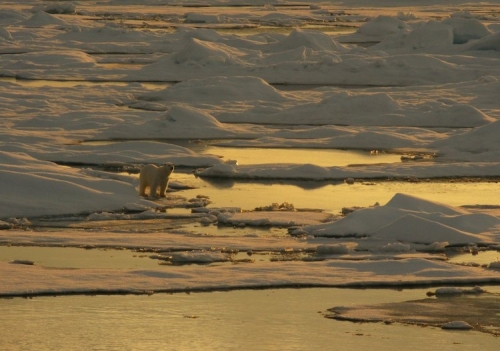 A polar bear on sea ice in the Beaufort Sea off the coast of Alaska in 2010.
Click image to enlarge. Credit: Pablo Clemente-Colon/ NOAA

As sea ice melts, it allows more of the sun’s rays to be absorbed by the open ocean, causing further warming in the Arctic regions. This could lead to further melting of the Greenland Ice Sheet, for example, which impacts sea level rise, and could subject coastal areas of the Arctic to more battering from storms. The warming of the Arctic can also influence the circulation patterns of the ocean and atmosphere. Some research has linked it to the wild kinks in the jet stream that brought bitter cold conditions to the eastern U.S. last winter, though there are still important questions about this potential influence.

But sea ice extent at the winter maximum doesn’t have a strong correlation with the summer minimum, making prediction of summer melt a thorny problem. Models have had some success at capturing summer melt when it follows the general pattern of decline seen in the past couple of decades. But when the minimum extent is anomalously high or low, the models miss it, as they did in the 2012 season when the minimum shattered the previous record — the difference in the area of sea ice melt between 2012 and the previous record, set in 2007, was greater than the area of Texas. 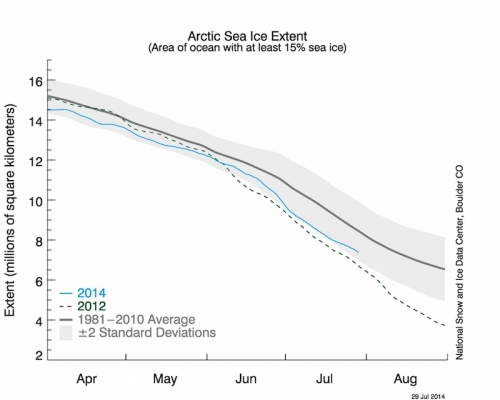 Arctic ice melt has progressed in fits and starts this year, with a rapid retreat in April following a late cool season growth spurt in March. The rate of melt then slowed, roughly following the average rate of melt until mid-June. At that time, an area of high pressure moved over the central Arctic, raising air temperatures in some areas and pushing the rate of melt to its second fastest point in the satellite era, the NSIDC said in its July 17 update.

By mid-July, when the rate of melt started to slow again as weather conditions changed, the ice extent was within 170,000 square miles of where it was at the same time in 2012 and 595,000 square miles below the 1981 to 2010 average. Retreat was particularly pronounced in the Kara, Beaufort and Laptev seas.

But the ice in the central Arctic Ocean remained relatively high, particularly compared with where it was in 2012, the NSIDC said.

Now that the melt season is entering the period where it typically slows, it is unlikely that 2014 will catch up with 2012, Stroeve said. The only way for the ice extent to edge in on the record would be if “warmer-than-normal air temperatures combined with strong wind to push the ice away from the coasts towards the pole,” she said.

The next NSIDC update on the state of the Arctic sea ice will come in early August.