The main culprit — in addition to the overall trend of global warming — is likely the rash of warm temperatures. With the polar vortex bringing cold air down to the U.S. this winter, warmer temperatures have been the norm in the Arctic. From February 1-17, temperatures were 7.2° to 14.4°F above normal for much of the Arctic. Some areas have been even warmer. 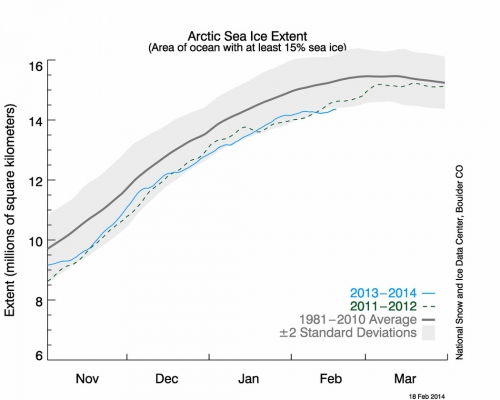 A look at Arctic sea ice extent. The gray line is average for 1981-2010 and the dashed line shows the extent for 2011-12, the years when a record-low summer minimum occurred. The blue line is this year through February 18.
Click the image to enlarge. Credit: National Snow and Ice Data Center

“Right now, the Arctic is pretty warm everywhere. If I look at temperature anomalies, there’s a huge anomaly over the Barents Sea and Sea of Okhotsk of about 10°C (above normal) compared to 1981-2010,” said Julienne Stroeve, a senior scientist at the National Snow and Ice Data Center.

Stroeve also said that warm waters in the North Atlantic have slowed ice growth, which is part of a decades-long trend due to both natural variability and human influences.

The decline in sea ice is one of the key indicators of climate change. Sea ice in January, the last full month for which data is available, has declined 3.2 percent per decade since 1979 compared to the 1981-2012 average. That equals roughly 18,500 square miles in ice lost per decade, the same area as Vermont and New Hampshire combined. This past January ranked as the fourth-lowest year on record, with 2011 being the all-time record lowest.

Summer sea ice decline is even more precipitous, dropping 13.7 percent per decade over the same period according to the Arctic Report Card.

Record low ice extent in winter doesn’t directly translate into record low extent in the summer in a given year. Stroeve said low winter ice could affect some aspects of the melt season, though.

With more ocean exposed to the sun, melt season can get started sooner. That’s because the dark ocean water absorbs more incoming sunlight than ice. Stroeve recently published a paper showing this and that more heat being absorbed has pushed the autumn freeze later as well. Those two factors have contributed to Arctic sea ice melt season lengthening by a month since 1979, though there’s still considerable year-to-year variability.

Local weather patterns also have a great impact on the amount of ice that melts during the summer. When Arctic sea ice reached a record low minimum in 2012, a two-week period of stormy weather quickly broke up ice and kickstarted the melt season.

“One bad weather event might be enough (to cause extensive melting), but if you have more ice coming out of winter, it requires multiple variables,” he said.

Arctic sea ice usually peaks in mid to late March so colder temperatures in the next few weeks could help ice growth rebound. In 2005, sea ice extent was also significantly lower than normal in mid-February, but rebounded more than 190,000 square miles in less than a month. Despite the rapid growth, that year was still 550,000 square miles below the 1981-2010 average.

The quality of new ice isn’t the same as old sea ice, which tends to be thicker, harder, and more resilient to warmer temperatures. Ice at least 4 years old has declined from 26 percent of the Arctic's ice pack at the end of winter in 1988 to 7 percent in 2013 according to climate.gov.

For the next week, temperatures look to remain at or above normal for much of the region, lowering the odds of a speedy increase in ice extent.