Bundle up for the new year, because the door to the Arctic is wide open.

Brutally cold air is spilling into the U.S., with few signs of warming during the next two weeks for large portions of the continental U.S. That polar air mass, which has caused temperatures to dip as low as minus 43°F in northern Minnesota, is likely to set records late this week from Chicago to Maine, and southward to the big cities of the Mid-Atlantic and Northeast.

If recent computer model projections are right, that frigid cold may also be reinforced by an even icier push of Arctic air next week, especially if the jet stream contorts into what meteorologists refer to as a trough of low pressure over the Southeast. 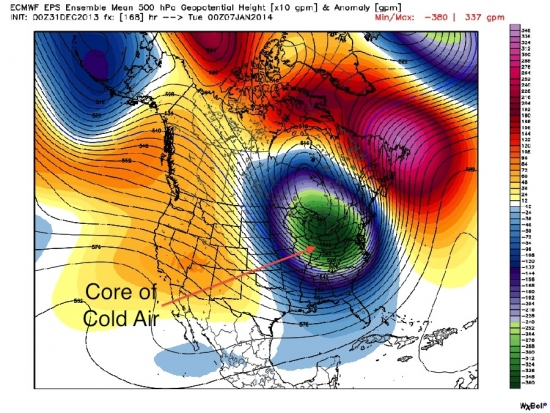 The bitter cold has broken records in places where it is usually difficult to set new thresholds for cold temperatures. In International Falls, Minn. — known as the icebox of the lower 48 states — there have been a record 8 days with a temperature colder than minus 30°F this month, breaking the previous record of 7 days. The coldest temperature there was minus 37°F on December 30, and the forecast low temperature on New Year’s Day is even colder, at about minus 40°F. The community of Embarrass, Minn., was even colder with a temperature of minus 43°F.

In a note on the NWS office’s facebook page, weather forecasters said Minnesota has been colder than the Arctic Circle at times in recent days, but warmer than Siberia, at least.

The wind chill in North Dakota and northern Minnesota is forecast to dip to 50 below zero on Tuesday night and wind chill advisories are in effect for those areas. Frostbite can occur on exposed skin in mere minutes in such cold temperatures.

According to the Weather Channel, Grand Forks, N.D., may see its coldest high temperature of any December day since 1990, with forecast highs more than 10°F below zero on Tuesday.

The coldest days in the East this week look to be Thursday through Saturday, with temperatures in northern New England struggling to rise to near zero, and highs in the teens or single digits from Boston to Albany and New York City on Friday. 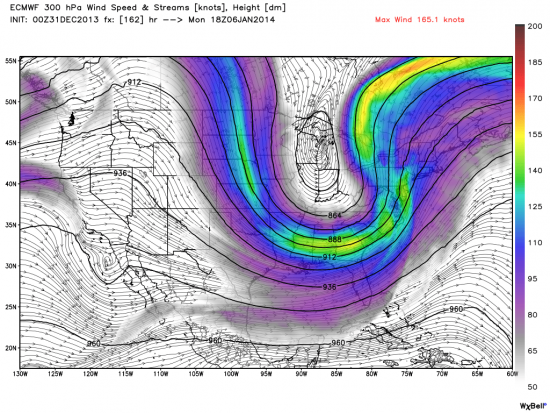 Computer model projection from the European model for the wind speed and direction at the jet stream level (about 30,000 feet) on Monday, Jan. 9. This shows the large dip, or trough, over the Ohio Valley and East Coast.
Click image to enlarge. Credit: WeatherBELL Analytics.

A wild card in the forecast is whether another, even more formidable shot of cold air will be dislodged from northern Canada and push into the Midwest, Ohio Valley, and Northeast during the first week of January. One computer model, known as the European model because it is run by the European Center for Medium-Range Weather Forecasting in Reading, England, has been projecting historic cold from January 5-10, with overnight low temperatures possibly dipping below zero in New York City, which is a rare event, and well below zero from the Dakotas to West Virginia.

While the European model is highly regarded for its accuracy, having famously locked on to Hurricane Sandy's devastating left turn into the Jersey Shore one week in advance, it has shown a tendency in overestimating the severity of cold air outbreaks this winter.

The cold December and cold start to January follows a year in which record daily lows in the continental U.S. outnumbered record daily highs for the first time in 20 years. On a global level, though, 2013 was probably one of the 5 warmest years on record.

However, that's small consolation to the tens of millions of Americans shivering through the next two weeks or more.