By Karl Mathiesen, The Guardian

The amount of carbon the Amazon’s remaining trees removed from the atmosphere fell by almost a third last decade, leading scientists to warn that manmade carbon emissions would need to be cut more deeply to tackle climate change. 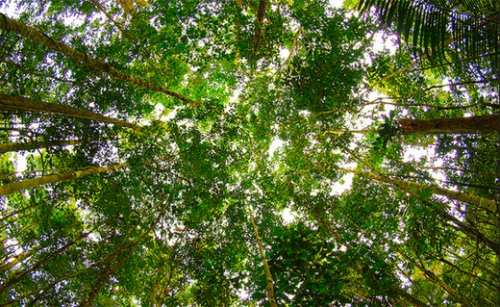 Trees in untouched areas of the forest have been dying off across the basin at an increasing rate, found the study, published in Nature on Wednesday. Meanwhile the tree growth produced by higher CO2 levels in recent decades leveled off.

The authors said this may be because the Amazon’s seasonal weather variation had become more extreme. They also suggested more CO2 in the atmosphere was, counter intuitively, leading to trees dying younger.

Dr. Roel Brienen of Leeds University said the Amazon was responsible for one-fifth to one-quarter of carbon sequestered on land, so any decline in its efficiency as a carbon sink was of consequence to efforts to combat climate change.

Brienen said the declines were occurring in pristine forest areas and were not directly related to the overall deforestation of the Amazon caused by logging and mineral exploration. The study found the Amazon’s overall ability to soak up CO2 dropped by 30 percent from the 1990s to the 2000s. During the same time, global CO2 emissions rose by 21 percent.

“We observed that these undisturbed forests over the last 20 years have been taking up carbon, acting as a CO2 sink, but the rate at which they are taking up carbon is decreasing over time,” said Brienen. 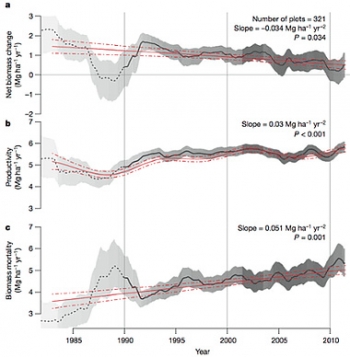 Graph B shows plateauing growth rates during the 2000s, while graph C shows a strong upwards trend in tree death over the last 20 years. The slower growth and increased die-off combine in graph A to produce a drag on the amount of carbon soaked up by a hectare of forest each year. Droughts during 2005 and 2010 are clearly visible as large increases in mortality.
Credit: Nature

The study is based on a continuous survey of trees at 321 sites across the Amazon over three decades. It found the growth rate stalled between 2000 and 2010, but more trees were dying every year.

Globally, vegetation is locking away more carbon as atmospheric CO2 levels rise. Plants are growing faster, fuelled by a more fertile atmosphere. But the Amazon is eschewing this trend.

Brienen said the growth in mortality could be the result of increased variability in the Amazonian climate. Two large droughts, in 2005 and 2010, caused mass tree die-offs.

But Brienen said the long-term trend of increasing mortality could not be explained by these isolated events. Overall the region is experiencing wetter wet seasons and drier dry seasons. The unfamiliar patterns place the trees under increased stress, possibly affecting the health of the forest.

Brienen said the forests may also be experiencing an unanticipated consequence of higher CO2 levels. He suggests the accelerated growth is leading to trees dying younger. The dead trees decay, slowly releasing much of their stored carbon to the atmosphere.

The idea is consistent with a prediction by an Australian scientist in 2009 that the Amazon would lose much of its ability to absorb carbon as the air became more rich with it.

“Our study does indicate that there is a limit to the amount of carbon that forests can be taking up. Then that is truly worrying,” said Brienen.