Now is the time of year when Alaska’s snowpack starts to build and temperatures plunge as the days become shorter and shorter. But this year, October has turned out to be more like September, with rainstorms instead of snowstorms, and some of the mildest temperatures on record for the month, particularly across interior Alaska. 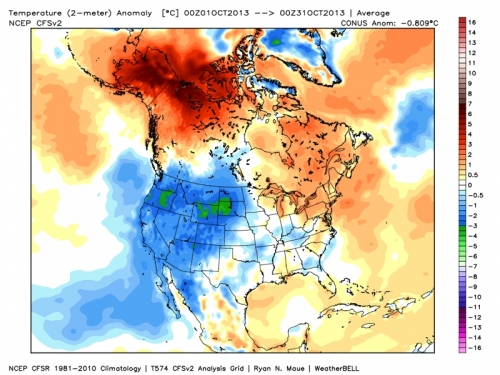 While the warm weather pattern, which has been dominated by a high pressure area in the upper atmosphere, is beginning to change with colder and snowier conditions arriving just in time for Halloween, the above-average temperatures have already carved October 2013’s place in the record books.

According to the National Weather Service in Fairbanks, rain in the city is rare after October 20, yet it rained there on Oct. 28 with no snow on the ground, an occurrence that “appears to be unprecedented in more than a century of weather observations,” the NWS said in a note on its Facebook page. Temperatures in the 50s at Eielson Air Force Base and Fort Greely were the warmest on record for so late in the fall.

The warm weather led to an even more unusual sight for the fall: smoke from an active wildfire. The Mississippi wildfire, which started in May about 70 miles southeast of Fairbanks, flared up again on Oct. 28, when strong winds were blowing and there were record warm temperatures in the lower 60s.

According to the Alaska News-Miner newspaper, this is “the latest anyone at the Alaska Fire Service can remember fighting an active Interior fire.”

In Fairbanks, the monthly average temperature was 36.5°F through Oct. 30, which was nearly 12°F above average for the month, and according to weather.com, ranks among the warmest Octobers on record in the city.

The NWS said that in Anchorage, the state’s largest city, the temperature set or tied the mark for the warmest overnight low temperature during 6 of 7 days in the period from October 14-20. It was also the warmest mid-October (11-20) on record there, with an average temperature of 47.9°F, which is close to average for mid-September. 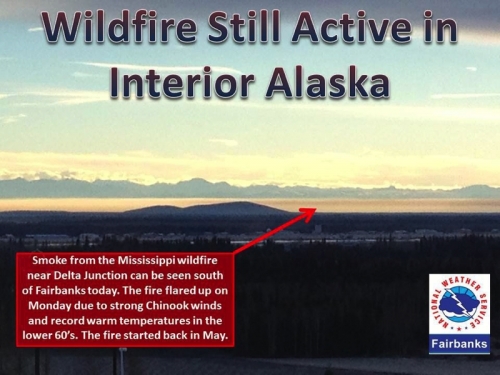 Smoke from the Mississippi wildfire visible in Alaska in late October.
Credit: NWS via Facebook.

Studies have shown that sea ice loss can speed warming of parts of the Far North, thereby helping to melt permafrost and unlock the greenhouse gases currently locked in such frozen lands. The Arctic is warming faster than any other area in the Northern Hemisphere, and as the country's only Arctic state, Alaska has been warming rapidly in recent years as well. That has had wide-ranging impacts, including coastal flooding that threatens the viability of some coastal communities, as well as melting permafrost that has wreaked havoc with home foundations in interior Alaska.

The coastline of northern Alaska continues to see a trend toward warmer-than-average fall seasons due to the late formation of the sea ice pack. As Arctic sea ice has declined in recent years, it has been slower to build back up close to the shoreline during the fall. That has resulted in above-average temperatures in places like Barrow — the northernmost town in the U.S. — and other locations on the North Slope, since open water allows more heat to escape into the atmosphere than sea ice would have.

The NWS said that it was the warmest mid-October on record in Barrow, with an average temperature of 28.4°F from Oct. 11-20 and has been 10°F or more above the 1981-2010 normal every day since October 13th. Through Oct. 30, the monthly temperature was about 8°F above average for the month.

However, it appears that Barrow will not break the record for the warmest October, a benchmark that was set just last year.