LONDON − Researchers in the U.S. have identified a way in which city-dwellers are inadvertently stoking up the heat of the night – by installing air conditioners. 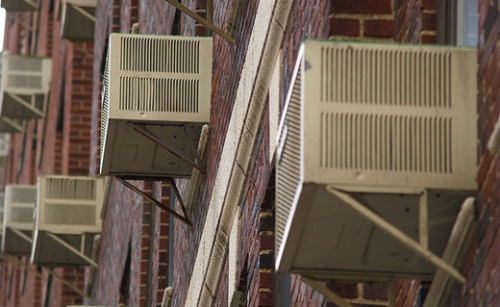 Increasing use of air conditioners to stay cool is having the vicious cycle effect, especially at night, of worsening the problem of cities getting hotter as the climate changes.
Credit: Bonnie Natko/flickr

Because the cities are getting hotter as the climate changes, residents are increasingly investing in air conditioning systems − which discharge heat from offices and apartment blocks straight into the city air. And the vicious circle effect is that cities get still warmer, making air conditioning all the more attractive to residents.

According to scientists at Arizona State University, the air conditioning system is now having a measurable effect. During the days, the systems emit waste heat, but because the days are hot anyway, the difference is negligible. At night, heat from air conditioning systems now raises some urban temperatures by more than 1°C (about 2°F), they report in the Journal of Geophysical Research Atmospheres.

The team focused on the role of air conditioning systems in the metropolitan area of the city of Phoenix, which is in the Sonora desert in Arizona, and conditions in the summertime are harsh there anyway.

But, worldwide, normally warm countries are experiencing increasing extremes of heat, and conditions in cities have on occasion become lethal.

To cap this, cities are inevitably hotspots – and it’s not just because of global warming. The concentration of traffic, commuter systems, street and indoor lighting, central heating, light industry, tarmac, tiles, bricks, building activity and millions of people can raise temperatures as much as 5°C (9°F) above the surrounding countryside.

At present, 87 percent of U.S. households have air conditioning, and the U.S. – which is not one of the warmer nations – uses more electricity to keep cool than all the other countries of the world combined. To keep the people of Phoenix cool during periods of extreme heat, air conditioning systems can consume more than half of total electricity needs, which puts a strain on power grids. 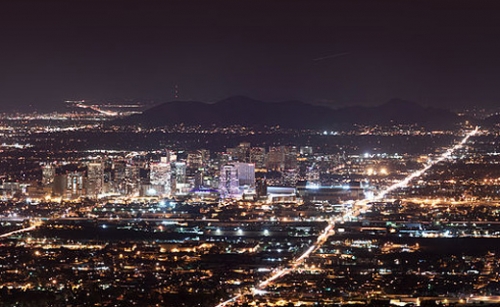 Burning up: the blazing night lights of Phoenix in the Sonora desert, where researchers concentrated their efforts.
Credit: Alan Stark, Wikimedia Commons via Climate News Network

The Arizona scientists simulated a 10-day period of unusually hot weather between July 10 and July 19, 2009, and used computer models and detailed readings from weather records to analyze the effect of air conditioning systems on local temperatures. Even though the biggest demand for air conditioning was in the daytime, they found the biggest difference was always at night.

“Our work demonstrates one Celsius degree local heating of urban atmospheres in hot and dry cities due to air conditioning use at night time,” said Francisco Salamanca, the report’s lead author. “This increase in outside air temperature in turn results in additional demands for air conditioning.

“Sustainable development and optimization of electricity consumption would require turning wasted heat from air conditioning into useful energy, which can be used inside houses for various purposes − including, for example, water heaters.”

Such actions would reduce local air temperatures: in Phoenix alone, they could directly save more than 1200 Megawatt hours of electricity per day.

In 2012, the U.S. experienced a set of record-breaking temperatures, and the U.S. Department of Energy has warned that days of extreme heat are expected to become more frequent and more intense because of climate change.

But this seems already to be a pattern worldwide, according to recent analyzes of climate patterns. And the demand for air conditioning is expected to accelerate in India, China and other emerging economies.