2016 was the second hottest year for the U.S. in more than 120 years of record keeping, government scientists announced on Monday, marking 20 above-average years in a row. Every state had a temperature ranking at least in the top seven, with two, Georgia and Alaska, recording their hottest year. 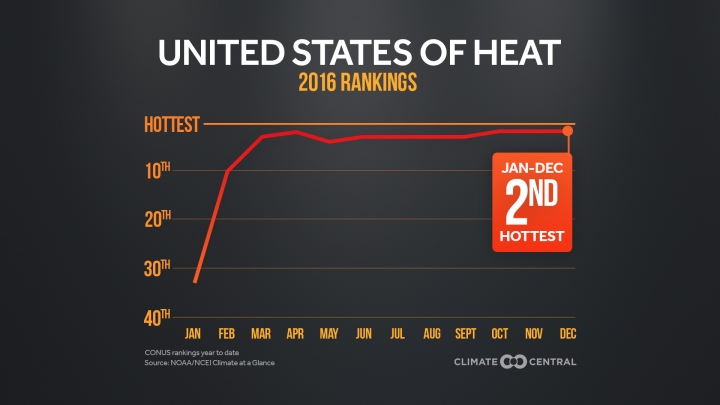 The announcement comes a week before the National Oceanic and Atmospheric Administration, which released the U.S. data, and NASA are expected to announce that 2016 set the record for the hottest year globally. Both the global record and the U.S. near-record are largely attributable to greenhouse gas-driven warming of the planet.

Both records also come amid a shift in the tenor of the discussion on U.S. climate policy after the election of Donald Trump to the presidency. Trump, who has previously called climate change a “hoax,” has chosen several cabinet nominees who reject the established science of climate change to cabinet positions; Senate confirmation hearings begin this week.

In addition to the pervasive warmth over the last year, the U.S. also had to deal with 15 weather and climate disasters that each caused more than $1 billion in damage. Together, they totalled more than $46 billion in losses and included several disastrous rain-driven flooding events.

These events, along with continued drought, lay bare the challenge for the country to learn how to cope with and prepare for a changing climate, said Deke Arndt, the climate monitoring chief of NOAA’s National Centers for Environmental Information.

The temperature for the contiguous U.S. was 2.9°F above the 20th century average for 2016, displacing 2015 and ranking only behind 2012, when searing heat waves hit the middle of the country.

More notable than the back-to-back second place years, Arndt said, was that 2016 was the 20th consecutive warmer-than-normal year for the U.S. and that the five hottest years for the country have all happened since 1998. Those streaks mirror global trends, with 15 of the 16 hottest years on record occurring in the 21st century and no record cold year globally since 1911.

Next week, both NOAA and NASA will release their global temperature numbers for 2016, which is expected to beat out 2015 as the hottest year on record. While El Niño played a role in boosting temperatures in both years, scientists have shown that human-caused warming is the main reason that global and U.S. temperatures have reached such heights.

Another signal of global warming was apparent in the U.S. temperature data, namely, that daily minimum temperatures are warming faster than maximum temperatures. This trend is expected because it is easier to warm up colder places and times of the day than already warm ones.

“That's been a recurring occurrence this decade, both in big averages and in the number and breadth of local extremes,” Arndt said in an email.

On the regional and state level, 2016 was the warmest year on record for the Southeast. Georgia was record warm, while most other states in the region ranked in the top two or three years. The exceptional warmth combined with an unusual dearth of rain to help fuel major drought and wildfires in the region.

Alaska saw its hottest year on record for the third year in a row since records there began in 1925; since then, the state’s average temperature has risen by 0.30°F per decade. On the local scale, Barrow, the northernmost city in the U.S., had an annual average temperature 7.1°F above the 1981-2010 average. Other temperature departures in the state included: Nome at 5.1°F above the average, Fairbanks at 3.9°F, Anchorage at 4.4°F, and Juneau at 2.7°F.

Record warm year over much of Alaska #akwx https://t.co/sEGeMjI69t pic.twitter.com/5ppQaIxR67

The warmth of 2016 wasn’t just confined to these regions, though, with almost every state recording a temperature in the top 10 percent of the record.

The U.S. also had to contend the second highest number of billion-dollar disasters in the past 37 years. These included four inland flooding events, including those that inundated parts of Texas and Louisiana after torrential rains.

A team working with Climate Central’s World Weather Attribution program found that the odds of having an event like the stunning 1 to 2 feet of rain that fell in the Baton Rouge area in August had doubled over the past century because of global warming. Since 1980, no year had seen more than two billion-dollar inland flood events.

“The number of regional flooding events that we had this year seemed unprecedented, and through the lens of billion-dollar disasters, it was unprecedented,” Arndt said.

Those heavy rains and floods contrasted with the droughts that have plagued several parts of the country over the past few years. In fact, every year since 2013 has seen higher than normal precipitation on average nationally, while the West and Southern Plains in particular have been deep in drought.

“To be dealing with big droughts while having ‘wet’ years means we've had a lot of rain fall in the wet places, and unusually low rainfall in the dry places,” Arndt said. “That's quite consistent with expectations of an enhanced hydrological cycle in a warmed world, and I would love to see the climate attribution science community look into this.”

Arndt said that while “we have dealt with all of these types of events before, and have been dealing with them for generations,” the major heat, rain and drought of 2016 underscores how climate extremes have increasingly impacted the nation in recent years and the need to adapt “to help fortify our physical and economic assets in the face of them.”

How such adaptation efforts will play out over the next few years is a major source of uncertainty and worry for climate science and clean energy advocates, who are concerned that the incoming Trump administration will undo many of the policies enacted by President Obama.

The President-elect, for example, has pledged to pull the U.S. out of the landmark Paris climate accord, which aims to curtail greenhouse gas emissions to limit the amount of warming that occurs this century, as well as to shore up the floundering U.S. coal industry.

Two of Trump’s cabinet nominees — Rick Perry, nominated for secretary of energy, and Scott Pruitt, nominated to lead the Environmental Protection Agency — have both rejected the conclusions of accepted climate science and have indicated they would roll back many of the Obama administration’s climate policies.

The nominee for secretary of state, Rex Tillerson, has been the chief executive of ExxonMobil, and while he has said he accepts climate science, environmental advocates worry that his lifelong service in the industry will result in more fossil fuel-friendly policies at the national and international level.

You May Also Like:
Potential for Collapse of Key Atlantic Current Rises
U.S. on Track to Become Net Energy Exporter by 2026
Large Iceberg Poised to Break Off From Antarctica
Exxon’s $180 Million Deal With Trump’s Pick for State