The new year has only just begun, but we’ve already recorded our first days with average carbon dioxide levels above 400 parts per million, potentially leading to many months in a row above this threshold, experts say. 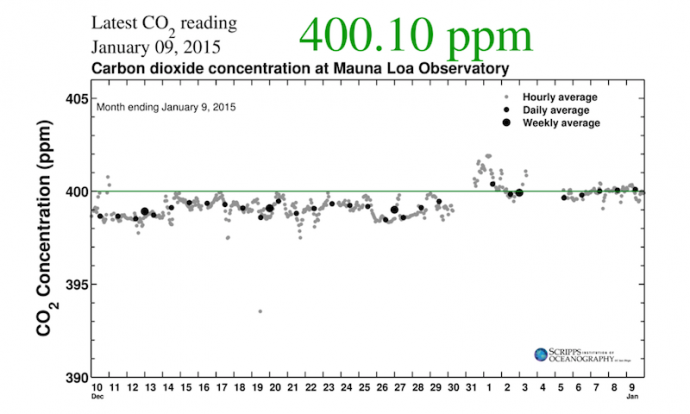 The Scripps Institution of Oceanography records of atmospheric carbon dioxide levels show that Jan. 1 was the first day of the new year above that concentration, followed by Jan. 3 and Jan. 7. Daily averages have continued at this level or higher through Jan. 9, though they could continue to dance up and down around that mark due to day-to-day variations caused by weather systems. But even with those fluctuations, 2015 will likely see many months above 400 ppm, possibly starting with the very first month of the year.

“My guess at this point is that January 2015 will be very slightly above 400 ppm, but it's too early to tell for sure,” Ralph Keeling, the scientist in charge of the CO2 monitoring project atop Hawaii’s Mauna Loa, said in an email. Keeling’s father, Charles, began the project in 1958. The graph that shows the decades-long rise in CO2 is eponymously called the Keeling Curve.

While the 400 ppm mark is somewhat symbolic (as the increase in warming between 399 ppm and 400 ppm is small), it is a large increase from pre-industrial CO2 concentrations, which were around 280 ppm. The progressively earlier occurrence of these high CO2 levels — not seen in somewhere between 800,000 and 15 million years — points to the inexorable buildup of heat-trapping gas in the atmosphere as human emissions continue unabated. That increase in CO2 and other greenhouse gases has raised Earth’s average temperature by 1.6°F since the beginning of the 20th century. Some scientists say that to avoid the worst consequences of climate change, that warming needs to stay under 2°C, or 3.6°F.

CO2 concentrations wax and wane with the seasonal plant cycle. Carbon dioxide levels begin to rise in late fall as the death of Northern Hemisphere vegetation releases it into the atmosphere, reaching a peak in May, after which the spring and summer plant growth causes it to decline once again. NASA’s new OCO-2 satellite mission has recently taken the most detailed snapshot of atmospheric CO2 to date, in the hopes of learning exactly where CO2 sources and sinks are, said mission scientist Christopher O'Dell, of Colorado State University. 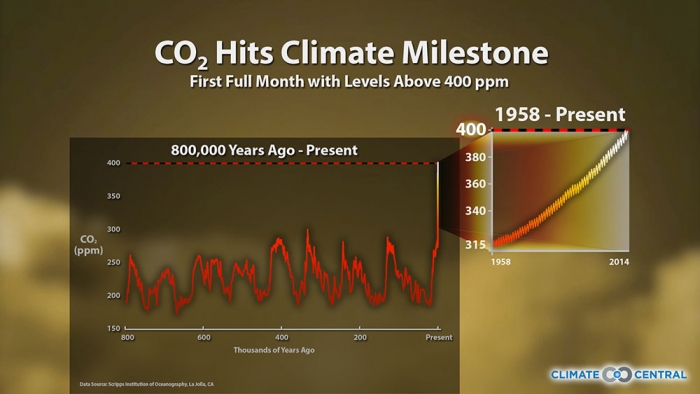 The world’s plants can only pull so much CO2 out of the atmosphere in a given season, while human emissions keep rising. This is leaving an excess of about 2 ppm of CO2 in the atmosphere every year, meaning the 400 ppm mark will keep occurring earlier and earlier. In just a year or two, carbon dioxide levels will likely be about 400 ppm year-round.

“I am not surprised that we are seeing daily means greater than 400 already popping up regularly. Next year that should start happening in November,” Pieter Tans, a climate scientist with the National Oceanic and Atmospheric Administration, said in an email.

NOAA’s own CO2 record-keeping varies slightly from the Scripps numbers, coming it at nearly 400 ppm. The differences are due to different methods of dealing with the data, though those differences are quite small, Keeling said.

Tans initially expected February to be the first month of the year above 400 ppm, but predicting that threshold is tricky because CO2 concentrations depend both on emissions and natural ecosystem processes, which can be influenced by climate phenomena like the El Nino Southern Oscillation cycle, he said.

The 400 ppm mark, regardless of when it occurs, is a symptom of the larger story of humans altering Earth's climate.

“Because of the likely major negative ramifications of CO2-induced warming on the climate, it serves as an important reminder: if we want to bequeath a liveable climate to future generations, we need to act now and not delay,” O'Dell said in an email.