With the arrival of summer, the year is nearly halfway through, and it has been a warm and somewhat weird one weather-wise for Alaska. While the eastern half of the U.S. shivered through winter, Alaska saw unseasonable warmth, which melted snows early in some areas and brought rains instead of snows. Snow and rain failed to fall in other places and have led to heightened wildfire risks, water restrictions and a particularly tough Iditarod. 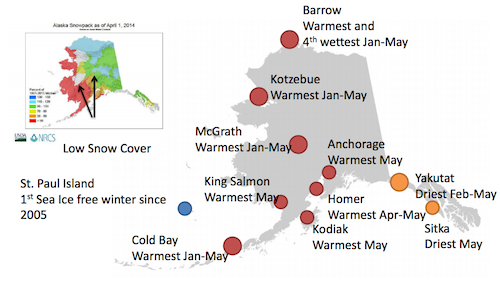 Various temperature and precipitation records and rankings in Alaska for the period from January through May 2014.
Credit: NOAA

“It was a tough winter here because we don’t like that warm winter,” said Richard Thoman, climate science and services manager for the National Weather Service’s Alaska region.

Alaska had its eighth warmest winter and its second warmest first five months of a year since record keeping began nearly a century ago, the National Oceanic and Atmospheric Administration reported in its monthly climate review, release on June 19.

The relative warmth was in marked contrast to the situation a year ago, when the January-May period was the 40th warmest. And while May 2014 was the sixth warmest on record, May 2013 was the 20th coolest.

Like the western half of the Lower 48, the 49th state has spent much of 2014 trapped under a ridge in the jet stream centered off the coast of Washington and British Columbia that funneled in warm air (the corresponding trough was what kept the East shivering). Last June, a different high pressure system set up right over Alaska and sent temperatures rising.

“The warmth has been dominant really for the last year over Alaska,” Thoman told Climate Central.

Barrow, in the far north of the state, had its warmest and fourth wettest January-May on record, Thoman said during NOAA’s press conference on the monthly review.

While the warmth that pervaded much of the state can’t be completely tied to climate change, as Alaska has experienced such periods before, “we’re getting to the place where we’re getting into uncharted territory,” Thoman said.

Last summer (left) a high pressure system parked over Alaska, bringing with it higher temperatures. This winter, a ridge system did the same over much of the West, including Alaska.
Click image to enlarge. Credit: Richard Thoman/NOAA

The situation in Barrow, on the other hand, can be much more firmly tied to the effects of global warming through its impact on sea ice. Ice used to cover the ocean near shore for much longer in the year. For example, even 10 years ago, sea ice was mostly present offshore near Barrow in October, but now that ice is only seen hundreds of miles from shore. Open ocean absorbs more of the sun’s rays, heating it and the lower part of the atmosphere, keeping temperatures in Barrow relatively balmy. Now, “every October is in the warmest 20 percent now” in Barrow, Thoman said.

In terms of precipitation in the state, parts of the southeast — normally one of the wettest areas of the country — had its driest February-May on record. A lack of high elevation snowfall, which usually melts and supplies rivers and streams, has threatened hydropower generation. The dryness has also caused Juneau to implement water restrictions and stop selling water to passing cruise ships.

A dearth of snow in the southwest Alaska, including the Kenai Peninsula, also made the landscape more susceptible to fires, including the Funny River fire, which started on May 19 and was the largest fire on the peninsula since 1947.

“That was a major player in that Funny River fire for sure,” Thoman said.

The fire caused the worst smoke conditions in Anchorage in nearly 10 years and sent smoke some 300 miles into the interior.

While the Funny River fire is now under control, officials are watching the eastern interior for fire development. The interior saw an average snowpack this year, but the eastern portion has been dry since the snow melted in April. (The snows in Denali National Park were fully cleared from park roads in April, the first time that task has been finished before May 1.) The eastern interior is a prime area for fires, most of which are started by lightning. So far thunderstorms in the area have been sparse. “There’s still time, but if nothing big gets going in the next couple of weeks, it’s unlikely to be a big fire year” as August’s rains will keep fires at bay, Thoman said. 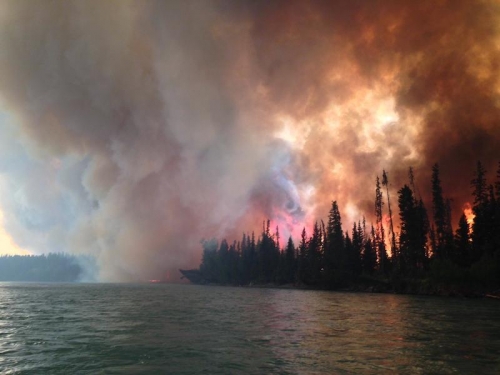 The Funny River fire rages in this photo taken on May 25, 2014.
Click image to enlarge. Credit: Josh Turnbow/Inciweb

The mild spring did at least prevent massive ice jams from forming on rivers and flooding towns as they did last spring. Thoman said the two spring melt-outs were “back-to-back textbook cases” of a bad year and a mild one.

You May Also Like
New Report Puts Price Tag on Climate Change in U.S.
Taking a Bite Out of Climate: 4 World Cup Snacks
Could 2014 Become the Warmest Year on Record?
Waves in the Atmosphere Fueling Extreme Weather