Fueled by the steady rise of greenhouse gases, 2014 is on track to go down as the hottest year on record.

With September 2014 in the books as the warmest September on record and the year-to-date temperatures tying with 1998 and 2010 as the warmest January-September, the National Climatic Data Center announced Monday that 2014 will likely break the record for the warmest year on the books.

Back in August, the year ranked as the third warmest on record. The jump this month came “because we keep seeing record warm months or near-record warm months,” said Jessica Blunden, a climate scientist with ERT, Inc., at the NCDC.

In fact, leaving aside calendar years, the period from October 2013 through September 2014 “is the warmest 12-month period that we’ve ever had on record,” Blunden told Climate Central.

All but one of the 10 warmest years on record have occurred in the 21st century (1998, when there was a very strong El Niño, is the exception). Earth’s steadily rising temperatures are the result of the buildup of greenhouse gases, such as carbon dioxide, in the planet’s atmosphere. These gases cause the atmosphere to warm, and a large chunk of that warmth is absorbed by the world’s oceans.

Those oceans, particularly the northeastern and equatorial Pacific, are largely what is fueling this record, Blunden said. Because temperatures in the oceans are slow to change, it is likely that warmth will hang around through the end of the year. That means that the odds “are pretty good” that 2014 will top 2010 as the warmest year on record, she said.

Those numbers and rankings broadly agree with records kept by NASA and the Japan Meteorological Agency, both of which also ranked September as the warmest on record. Different agencies use different methods of compiling global temperatures, accounting for slight variations in their numbers and rankings from month-to-month and year-to-year.

At the beginning of the year, NCDC climate scientists weren’t sure how the year would turn out. The end of 2013 saw an uptick in global warmth, with a particularly toasty November and December and they expected that trend to continue into 2014, as it largely did. (2013 ended up ranking as the fourth warmest on record.)

“You never know for sure what’s going to happen in a climate system based on natural variations,” Blunden said.

While the winter was a brutally cold one for the eastern half of the U.S., and spring seemed to be more of an extension of winter there, much of the rest of the globe was experiencing anomalous warmth. In some places, including the Northeast Pacific, that warmth reached record-setting levels.

With the ocean warmth expected to continue and an El Niño event trying to form, that makes it likely that the final three months of the year will also be among the warmest. That would stand in contrast to 1998 and 2010, where the record warmth started to taper off at the end of both years, in part because El Niños that were in place at the beginning of those years died down. 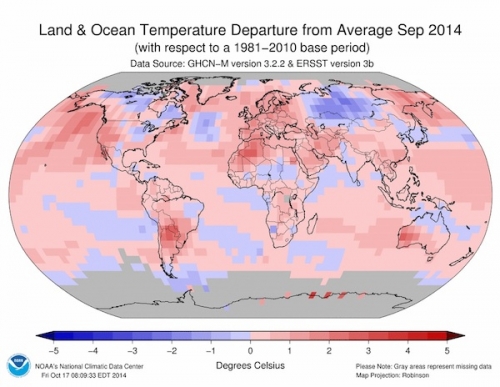 The amount that temperatures around the world departed from the 1981-2010 average in September 2014 (in degrees Celsius).
Click image to enlarge. Credit: NOAA

The land area of the planet is perhaps the biggest unknown in the coming months because they change temperature more rapidly, but if the El Niño forms, that will stack the deck because during an El Niño “you tend to have more warmth over land areas in general,” Blunden said.

The NCDC has worked out that if each of the remaining months of this year at least matches the average of its 10 warmest occurrences, then 2014 will be the warmest year on record. If each month ties its average so far this century, then the year will tie 2010 as the warmest.

With October more than halfway over, it is possible this month will also set a temperature record, and could break the 12-month record yet again. “So we just have to see how that plays out,” Blunden said.