The world is on track to have its 7th warmest year on record in 2013, which is up from 2012, which was the globe’s 9th warmest year, according to a new report released on Wednesday. The report from the World Meteorological Organization in Geneva found that the January to September period tied with 2003 for the 7th warmest such period on record, with an average global surface temperature that was 0.86°F above the 1961-1990 average. In addition, global average sea level reached a record high this year, with an average rate of increase of 0.13 inches per year, which is double the observed 20th century rate.

Sea level is rising because of melting polar ice caps and warming ocean temperatures that cause the water to expand over time. 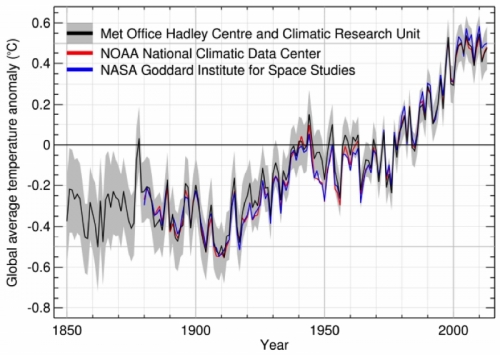 The pace of sea level rise varies regionally. In some parts of the world, such as in Manila in the Philippines, sinking land combined with rising seas is creating coastal flooding concerns even in the absence of a major storm.

WMO secretary-general Michel Jarraud pointed to sea level rise as a factor that makes coastal populations more vulnerable to the impacts from tropical cyclones, such as deadly Super Typhoon Haiyan, which was also known as Yolanda in the Philippines.

“Although individual tropical cyclones cannot be directly attributed to climate change, higher sea levels are already making coastal populations more vulnerable to storm surges. We saw this with tragic consequences in the Philippines,” Jarraud said. For example, a recent study on coastal flooding of the world’s largest coastal cities found that Hong Kong has $60.7 billion sitting at or below the 100-year flood level. That study found that if no actions are taken to boost Hong Kong's flood defenses, coastal flooding could put $140 billion in infrastructure at risk if sea levels rise by 15.8 inches.

A recent report from the U.N. Intergovernmental Panel on Climate Change (IPCC) found that global average sea level is likely to rise anywhere from 10.2 to 38 inches by 2100, depending on the pace of greenhouse gas emissions and warming of the climate system.

The WMO report, which was released in Warsaw, Poland, where diplomats are meeting to forge a path forward toward a new global climate treaty in 2015, found that temperatures in 2013 are about the same as the average annual temperature during 2001-2010, which was the warmest decade on record.

“All of the warmest years have been since 1998 and this year once again continues the underlying, long-term trend,” Jirraud said. “The coldest years now are warmer than the hottest years before 1998.”

The increase in temperatures compared to 2012 likely has to do with the absence of La Niña conditions since April of last year, along with the effects of increasing concentrations of greenhouse gases in the atmosphere. During a La Niña event, ocean temperatures in the equatorial tropical Pacific Ocean are cooler than average, which can work to hold down global average surface temperatures. 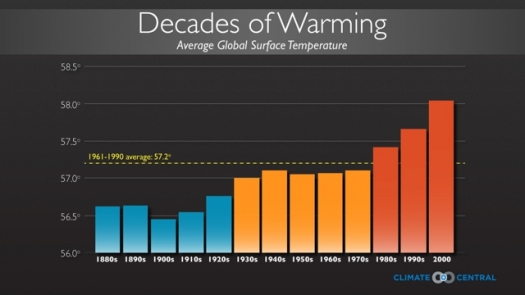 Each of the past three decades has been among the warmest in the instrument record, and likely the Northern Hemisphere's warmest in more than 1,000 years. Click image to enlarge.
Credit: Climate Central

In a separate report released on Nov. 6, the WMO found that the amount of carbon dioxide (CO2), which is the main long-lived greenhouse gas responsible for manmade global warming, hit a record high in 2012 of 393.1 parts per million, or 141 percent of the pre-industrial level of 278 parts per million.

Largely as a result of all the extra CO2 and other greenhouse gases pumped into the air, worldwide average temperatures have already risen by 1.6°F between 1901-2012 and are projected to increase by between 0.54°F to 8.64°F by 2081-2100 compared to 1986-2005 levels, depending on the future amounts of greenhouse gases in the air, according to the IPCC.

Australia had its hottest month on record in January 2013, its hottest summer on record, and its 3rd-hottest winter. The country is also headed for its hottest year on record as well. During the country’s intense heat wave in January, Australia set a record for the hottest nationally-averaged maximum temperature, with a reading of 104.5 degrees Fahrenheit.

According to the report, the annual number of record high temperatures in Australia has doubled since 1960, with the past decade seeing the highest number on record during that time period.