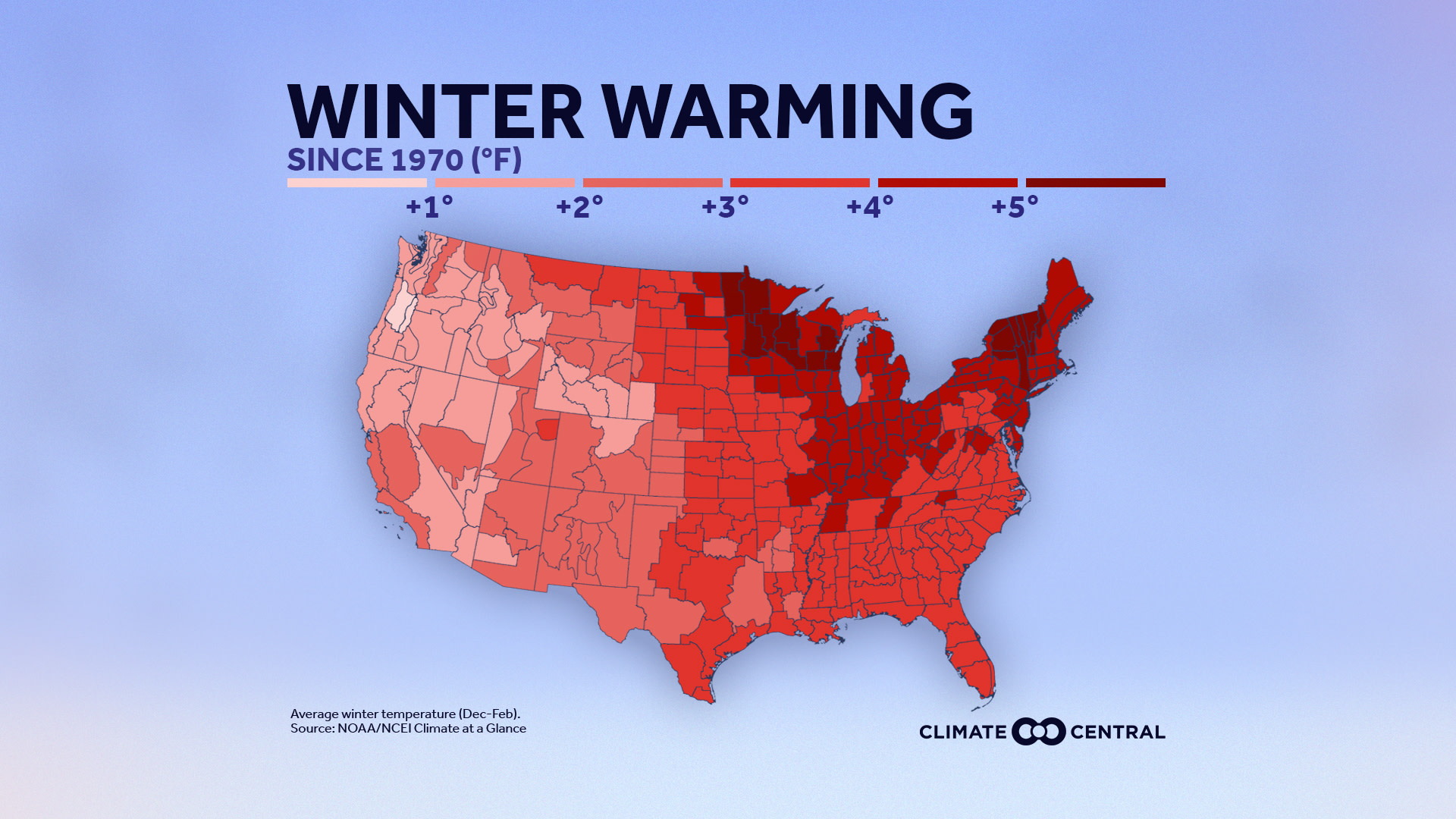 NOTE: Climate Central decided to share our winter package weeks ahead of meteorological winter (December 1st) since many meteorologists are making their winter forecasts and requested updated winter data.

There is no question that it still gets cold in a warming climate—just this past October, multiple locations across the Northern U.S. broke cold and snow records—but the winter season is less cold than it used to be a half-century ago. Furthermore, it is the fastest-warming season in 38 out of 49 states. This may sound inviting to folks that love warmer weather, but a warming winter comes with consequences.

A warmer winter can have negative impacts on humans, especially economically. For instance, a warmer winter threatens winter sports, like snowboarding and skiing, because of less snow accumulation and conditions that are too warm for snowmaking. Furthermore, ice fishing, a part of the culture in some Northern tier states, faces significant lake ice cover loss in the future. According to a 2018 report on the 2015-2016 skiing and snowmobiling season, these industries generated $11 billion to the U.S. economy and supported over 190,000 jobs—often in rural areas. The winter sports industry will be negatively impacted by climate change. The severity of those impacts will be driven by the amount of greenhouse gas emissions now and in the near future.

In addition to the winter sports industry, a warmer winter can also impact fruit production. Cherry, apple, and peach trees require a minimum number of winter chill hours before they can develop fruit in the subsequent spring and summer months. In a warming climate, the winter’s chill period is decreasing and could eventually become insufficient for fruit development in the areas where the trees are currently planted. For example, the “Peach State” of Georgia is facing peach production challenges to its iconic fruit.

What’s the snow forecast in your area?
The National Weather Service’s Winter Page provides maps and forecasts for snow and ice in your area. Their Winter Weather Desk provides twice-daily updated forecasts for snow, freezing rain, and other wintry conditions around the country. You can also see snow reports at specific ski resorts here.

How is climate change impacting winter activities near you?
For more general information on climate change and the snow sports industry, check out Climate Central’s On Thin Ice report, Protect Our Winters website, or this Climate and Skiing report from NOAA. For more region specific data, the National Ski Areas Association (NSAA) has a list of different industry statistics to analyze.

How will warming winters affect agriculture in your area?
Look up local projections of the climate and crops with the Climate Toolbox. You can calculate how many chill hours are projected in your specific location (make sure to change the data to “chill” and set your location). You can also look at local crop suitability, calculated from multiple parameters including chill accumulation.

The SciLine service, 500 Women Scientists or the press offices of local universities may be able to connect you with local scientists who have expertise on warming winters  in your area. The American Association of State Climatologists is a professional scientific organization composed of all 50 state climatologists. For more information on fruit production or snow sports, reach out to your local farmer or ski resort.

Average temperatures and days above normal were calculated for each winter (December, January, February) from 1969-70 to 2019-20 using data obtained from the Applied Climate Information System. Winter days above normal are defined as the number of days where the average temperature was above the 1981-2010 NOAA/NCEI climate normal. Climate Central's local analyses include 244 stations. However, for data summaries based on linear trends, only 242 stations are included due to large data gaps in St. Johnsbury, Vt. and Wheeling, W. Va.