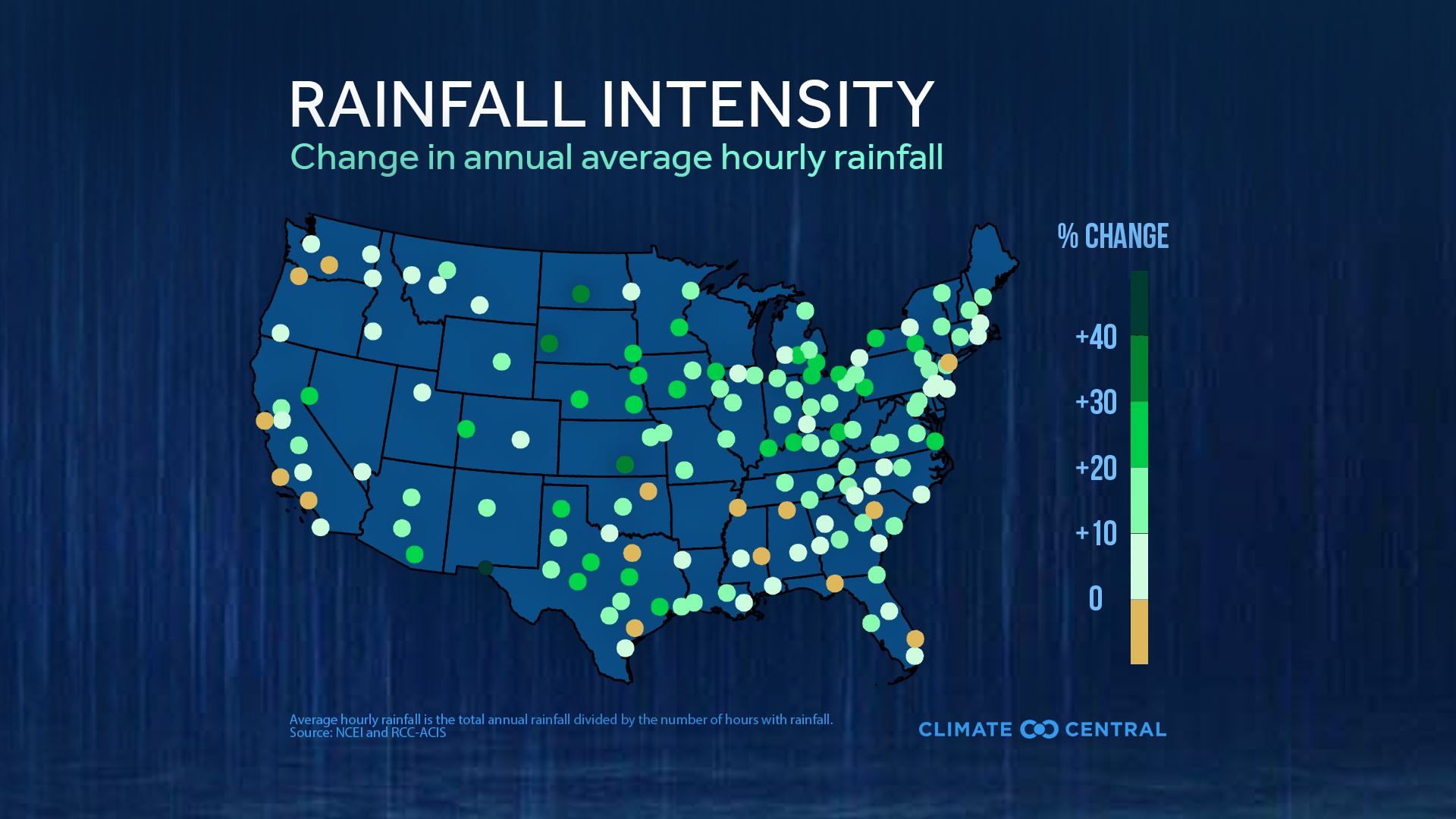 Climate change is supercharging the water cycle, leading to heavier rainfall extremes in many parts of the U.S.

Heavy rains contribute to the risk of flooding—which can cause illness, injury and death, as well as destroy homes and strain aging infrastructure.

Intensifying rainfall has been affecting Americans for more than three decades. Changes in rainfall from 1988 to 2017 accounted for one-third of U.S. flood damages (about $73 billion) over that same period. And the most intense downpours caused the largest damages.

Heavy downpours bring more rain over a shorter period, which can lead to flash flooding and landslides. These events are especially hazardous because their rapid onset limits time to issue warnings and get people out of harm’s way.

These especially risky rainfall extremes are the focus of a new analysis and report from Climate Central.

An increase in the Simple Hourly Rainfall Intensity Index indicates an increase in hourly rainfall intensity—in other words, more rain falling per hour.

More rain per hour in most places—even dry ones

The 10 locations with the greatest increase in hourly rainfall intensity spanned a wide range of mean annual precipitation, and all but one (Huntington, W.Va.) are below the national average (31.3 inches for the 1991-2020 normal).

This underscores that the increase in hourly heavy rainfall intensity is widespread and that the risks posed by short bursts of extreme rainfall are relevant for both wet and dry locations. And places with high total annual rainfall don’t necessarily have the largest increases in the intensity of rainfall events.

This finding is consistent with the latest reports from the Intergovernmental Panel on Climate Change indicating that precipitation extremes are likely to increase nearly everywhere, even in regions with decreasing average precipitation.

How vulnerable is your area to flooding?
Factors like local topography, age of infrastructure, watershed health, and precipitation trends influence flood vulnerability. See current flood risks in your neighborhood with FloodFactor’s zipcode-level risk identifier. A 2021 report found that one-fourth of critical infrastructure is put at risk of failure by flooding. The American Society of Civil Engineers grades the integrity of infrastructures by state and category.

Who is most vulnerable to heavy rain-related hazards?
Racial minorities and mobile homes are disproportionately exposed to flooding, especially in rural areas and in the southern U.S. The American Flood Coalition has resources on adaptation, equitable disaster recovery, and funding opportunities for flood-resilient communities. On March 22, the U.S. Department of Housing and Urban Development (HUD) announced nearly $3 billion in funding to aid in disaster recovery.

The SciLine service, 500 Women Scientists or the press offices of local universities may be able to connect you with local scientists who have expertise on extreme rainfall and climate change. The American Association of State Climatologists is a professional scientific organization composed of all state climatologists.

The calculation of the Simple Hourly Rainfall Intensity Index is the total annual rainfall divided by the total number of hours with rainfall in a year. This is an extension of one of the core climate indices defined by the Expert Team on Climate Change Detection and Indices, the Simple Precipitation Intensity (SDII), modified to evaluate per hour rather than per day. For the detailed methodology, please refer to our Wetter Rainfall Hours in a Warming Climate report.