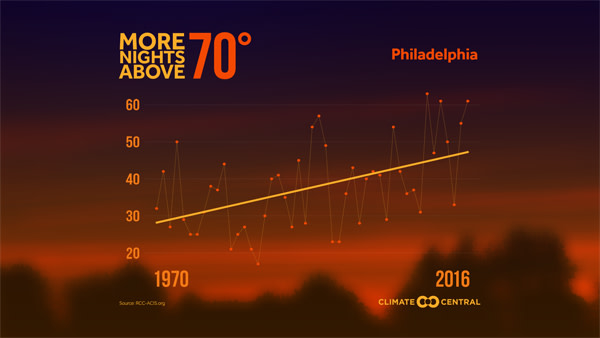 Take the first half of 2017, the second hottest start to the year on record for the U.S. From January-June, the contiguous U.S. average low temperature has ranked as the second warmest on record, while the average high temperature has been the fifth hottest over that period.

While the urban heat island helps raise temperatures in cities, warmer nights have been observed in both rural and urban areas. That points to the role of long-term warming driven by greenhouse gases being added to the atmosphere.

During the summer, warmer nights mean there’s less time to recover from the heat of the day. That raises the risk of heat related illness during a heat wave. They can also increase the demand for air conditioning, adding to cooling costs and putting more stress on the electrical grid. Warmer nights during the spring and fall shift the annual dates of the first and last freeze, which can affect the growing season, agricultural practices, and ultimately, the price of produce at the supermarket.

Note: This week’s Climate Matters is a follow-up to our 2015 statewide analyses on warming summer nights (here), in which we examined how much warming has occurred in each state since 1970.