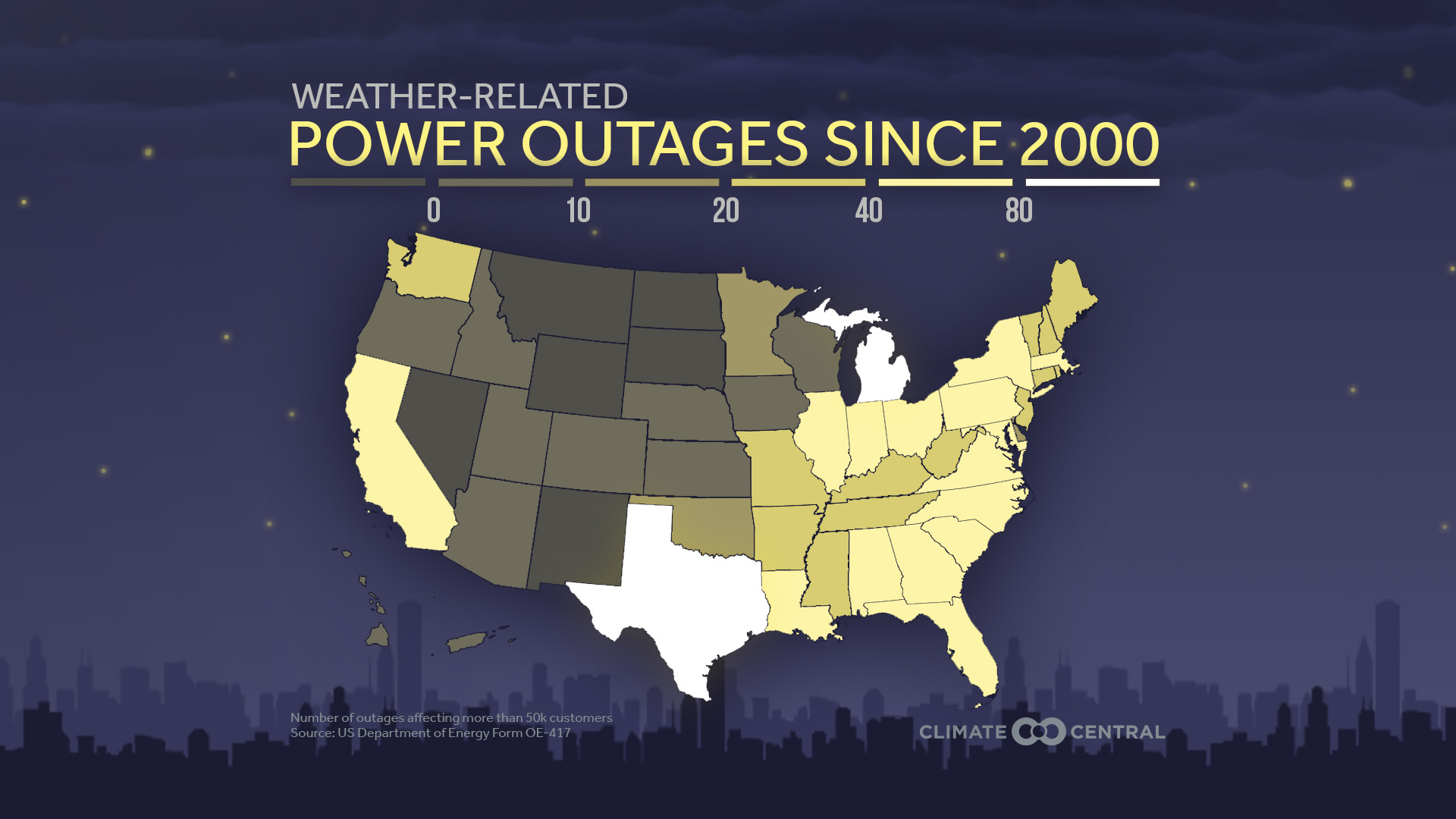 In early August, Hurricane Isaias knocked out power for more than 2 million customers across states in the Northeast, leaving many without electricity for a week. Before the end of the month, Hurricane Laura left 400,000 customers in the dark, and at least seven people died from carbon monoxide they inhaled from generators used during the extended electrical outages. California experienced rolling blackouts before September could arrive, as triple-digit temperatures broke records around the state.

Hurricanes, wildfires, ice storms, flooding, heat waves and other extreme weather events are growing in number or intensity with climate change. Combined with the nation’s aging electrical infrastructure, extreme weather is causing frequent damage to our electrical system, costing Americans and the economy tens of billions of dollars each year, and impacting public health. Between 2003 and 2012, weather-related outages are estimated to have cost the U.S. economy an inflation-adjusted annual average of $18 billion to $33 billion.

While for many, power outages are a nuisance and economically disruptive, they have the potential to become life-threatening in a matter of hours for certain vulnerable populations. Loss of electricity puts health care facilities at risk and can knock out essential equipment. Refrigeration, heating and cooling come to mind first. But it also halts potable water pumping equipment, and stalls sewage treatment plants, which can force the release of raw sewage into waterways.

Climate Central analyzed 20 years of power outage data, which is supplied by utilities to the federal government and the North American Electric Reliability Corporation. The data show:

Much of the U.S. transmission and distribution network, known as the grid, is above ground. Transformers, transmission wires, and utility poles are all vulnerable to severe weather, particularly high winds, heavy rain, ice, snow, and electrical storms. Even in areas where power lines are buried, flooding can lead to loss of power, as happened in Houston during Hurricane Harvey.

So what can be done to keep the lights on? While upgrading the nation’s grid to become more resilient is expensive and challenging, there are a number of promising solutions to help us adapt to increasingly extreme weather, and many that can even lower carbon emissions. Here are a few:

Look up weather and climate disasters and their impacts in your state or region.

NOAA has an interactive tool that allows you to visualize the frequency and cost of billion-dollar weather and climate events over time for the country, geographical regions, and states.  And the EIA has a map intended to help identify potential threats to energy infrastructure from significant storms and other weather events.

Are individuals and facilities in your city or state prepared for when the power goes out?

FEMA offers guidance for healthcare facilities, businesses, and tips for staying safe during power outages. The CDC provides information for helping your readers to prepare for and cope with sudden loss of power. And the Substance Abuse and Mental Health Services Administration (SAMSHA) provides research on how disasters affect low-income communities.

A number of journalism schools and organizations provide advice for responsibly reporting on disasters, including focusing on safety, data, and cultural sensitivity. You can find preparedness materials for hurricanes, flooding, and other health emergencies at the Centers for Disease Control and Prevention (CDC). Be sure to check out Climate Central’s extreme weather toolkits, videos, and our recent series of online workshops for covering disasters.

The SciLine service, 500 Women Scientists or the press offices of local universities may be able to connect you with local scientists who have expertise in your area. Find your state’s  electricity regulators through the National Association of Regulatory Utility Commissioners. The EPA provides a list of emergency response commissions’ contact information for each state and the International Association of Emergency Managers (IAEM) can connect you with local members or experts around the country. In addition, the American Association of State Climatologists is a professional scientific organization composed of all 50 state climatologists.

Power outage data from 2000 to 2019 was collected from the US Department of Energy’s Form OE-417 reports. Major outages are considered to be events that affected at least 50,000 customers. For the purpose of our analysis, we consider only power outages (including blackouts and voltage losses), fuel supply emergencies, and emergency appeals for reduced electricity usages where there was a reported number of customers affected or power lost. We do not include reports of vandalism or cyber-attacks. Regional definitions broadly correspond with those outlined in the Fourth National Climate Assessment with the exception of Hawaii and Puerto Rico.