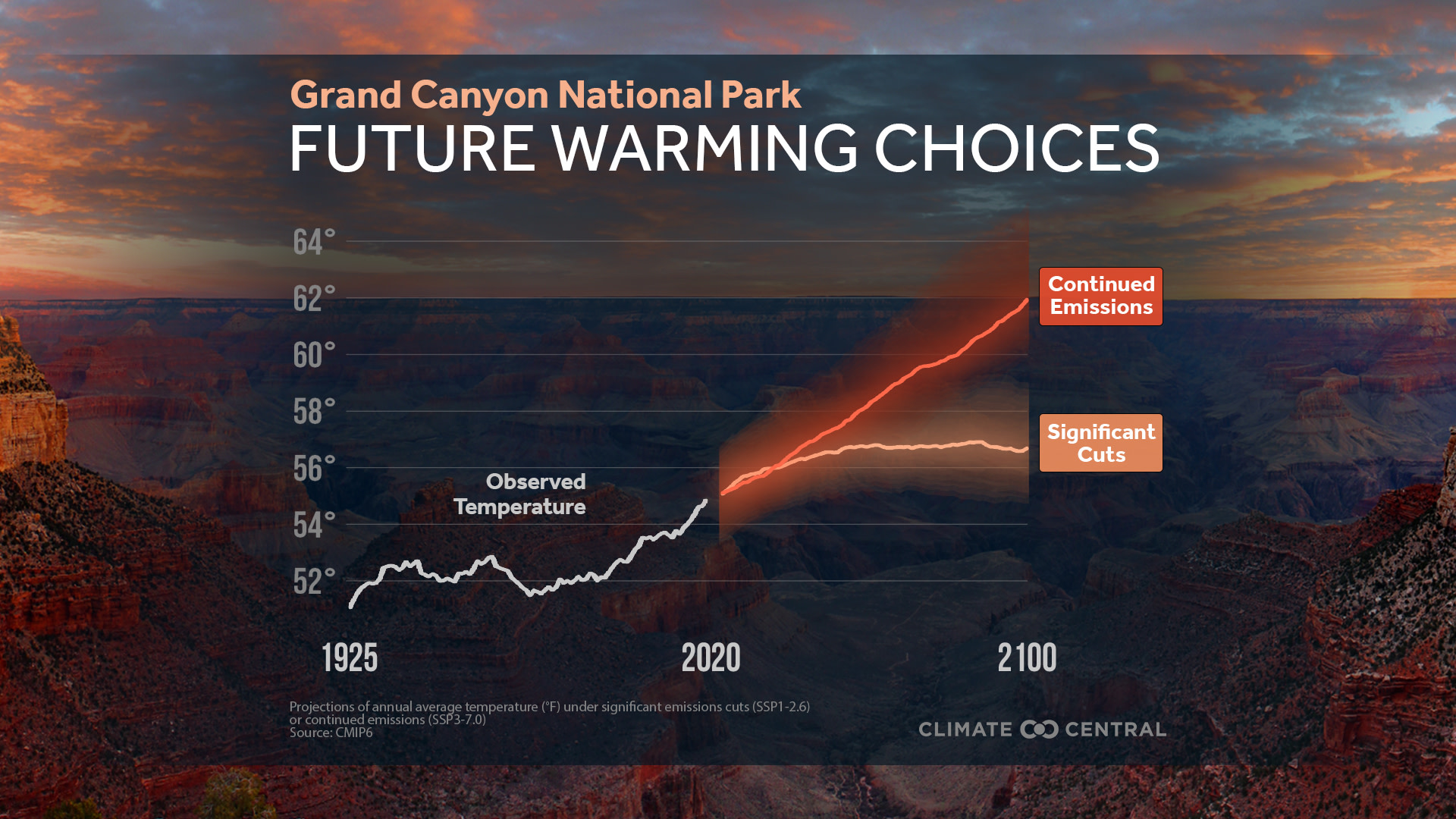 On April 22, NASA is celebrating the planet under our feet and in our hearts – Earth! Fifty-two years and counting, celebrate Earth Day with a NASA Expert. For interviews, click here.

Happy National Park Week! National Park Week kicks off this Saturday, April 16—when park entrance fees will be waived. The entire week is about exploring your local park and celebrating the 400+ treasured parks across the U.S.

More than 297 million people visited national parks in 2021. But the parks aren’t just about tourism and recreation. They also provide cultural, ecological, geologic, and educational resources.

Changing climate, changing parks. As our climate changes, national parks are changing too. In fact, between 1895 and 2010, national parks warmed at twice the national rate—reflecting that much of the total park area is in climate-vulnerable places including the Arctic, mountains, and arid regions.

102 years of warming in national parks. Climate Central’s analysis of temperatures in 62 national parks since their founding in 1916 found that:

What do these historical warming trends mean for the future of our national parks?

By the year 2100, annual average temperatures across 62 major national parks could warm between 5.5 and 11.0 °F compared to the 1991-2020 baseline—depending on how quickly we reduce heat-trapping emissions (see methodology here).

The four parks that could see the most future warming are all in Alaska. Kobuk Valley National Park in Arctic Alaska is projected to warm the most by 2100, when annual average temperatures could be 9.6 to 18.6 °F warmer than the 1991-2020 baseline.

These levels of warming mean that future generations could inherit national parks that are altogether different from those we enjoy today.

Adapting for an uncertain future. The National Park Service is already adapting to current and expected future changes brought by warming. A recent National Park Service report provides a set of guidance for park managers to develop adaptation strategies for the unique risks faced in each park.

Climate Central’s other media resources for national parks include:

What climate risks are national parks facing?
With over 400 park units across the National Park Service, parks are facing a wide range of climate risks.

How are national parks adapting to climate change?
The National Park Service uses scenario planning to prepare for a range of likely future conditions in parks. For more information on scenario planning and examples of it in action at individual parks, check out the Climate Change Scenario Planning Showcase. Strategic decision-making about the future of park resources is also informed by the resist–accept–direct framework.

The SciLine service, 500 Women Scientists or the press offices of local universities may be able to connect you with local scientists who have relevant expertise. The American Association of State Climatologists is a professional scientific organization composed of all 50 state climatologists.

Historical average annual temperature data was obtained for the centroid coordinates of 62 national parks using the University of East Anglia’s CRU TS v4.05 dataset. Projection data was calculated using data from the Coupled Model Intercomparison Project 6 (CMIP6). We downloaded data from the CMIP6 repository and created time series for each of the national parks. For each park, the data consist of monthly temperatures estimated by 35 models under SSP1-2.6 (low CO2) and SSP3-7.0 (high CO2) scenarios. The data were averaged for each year and then the time series were smoothed to emphasize the change in the average conditions, rather than year-to-year variability. Next, we combined the models for each park to estimate the median temperature and confidence intervals for the two scenarios. Thus, if a graphic shows a temperature of 65°F in 2050 for a particular scenario, that means that if CO2 emissions play out as depicted in the scenario, then the temperature in the years around 2050 should average out to 65°F. Any particular year could be above or below this value.  For a more detailed methodology of how we generally calculate projection data, see here.