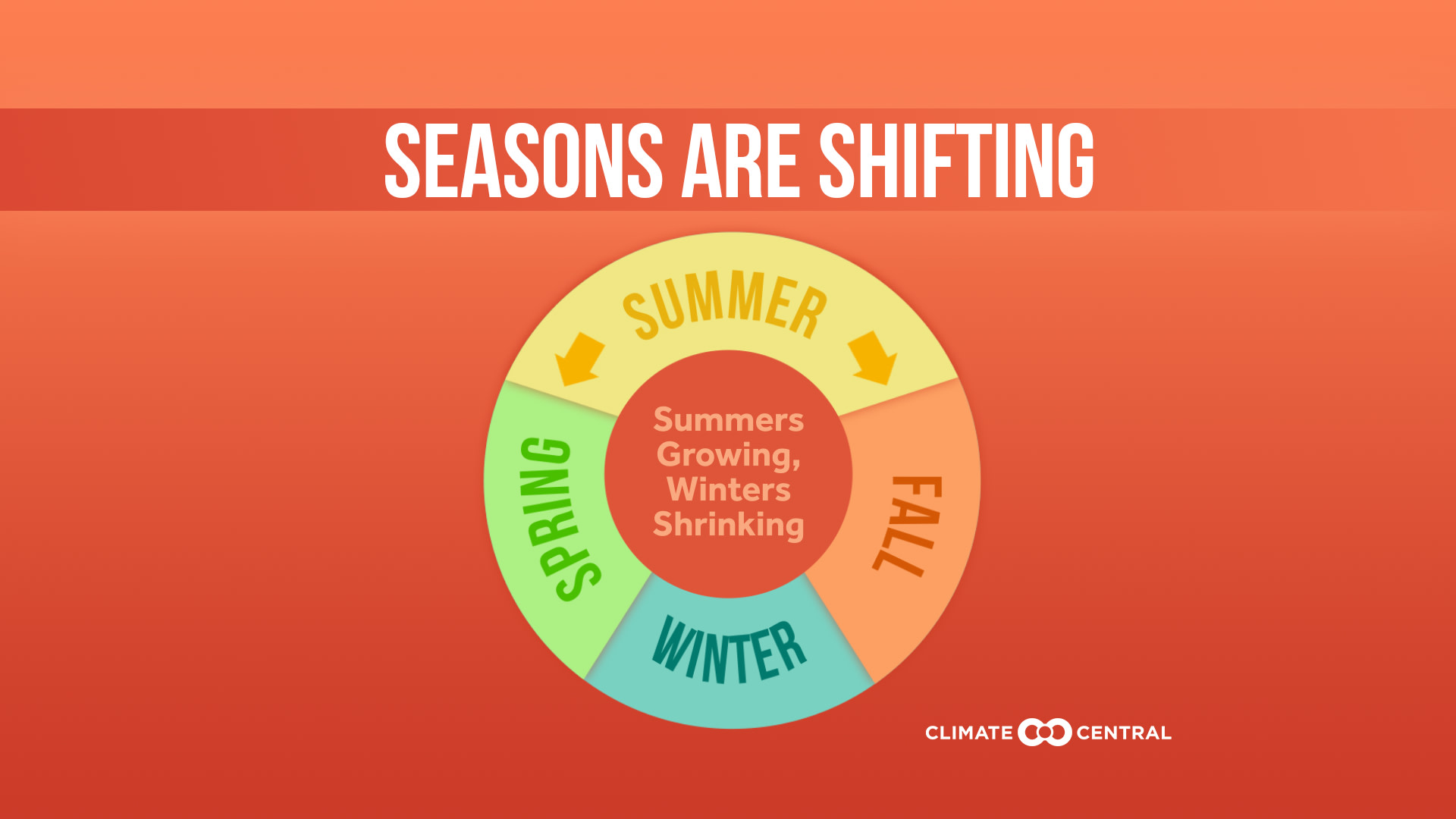 A recent analysis found that average fall temperatures are increasing due to our warming climate. This week, Climate Central found that summer temperatures are lingering longer, increasingly intruding on the fall season. The analysis looked at the last calendar day when local temperatures reached their average daily summer high. Of the 242 cities analyzed across the U.S, 77% (186) recorded their last day of summer-like temperatures an average of three or more days later since 1970 with half (122) lasting a week or more longer. The largest changes were reported in the Gulf region: Florida and Texas top the list with Miami, Lubbock, and San Angelo extending into the year by an average of 45, 25, and 24 days respectively since 1970.

The hallmarks of our shifting spring phenology can be most noticeable, such as earlier floral bloom and snow melt, but we know that delayed autumnal temperatures also have consequences for ecosystems. The intrusion of summer warmth into colder seasons presents a significant challenge for native plant and animal species whose life cycles are scheduled around the once-reliable seasonal changes. For instance, natural tactics to withstand cold temperatures (known as ‘overwintering’) are pushed back, meaning later migration, hibernation and leaf drop.

A longer frost-free season spells trouble for allergy sufferers, but it could mean more time for growing and harvesting crops ーan average of two extra weeks since 1970. While this may be a possible benefit to some farmers and crops in some locations, there are numerous other impacts of climate change on agriculture such as water stress, depleted crop yields, and risks for farm workers due to excessive heat, and losses from increases in extreme weather events.

Colder temperatures are what keeps many pest and invasive species at bay, so retreating cold could also favor the survival of more mosquitoes, ticks (and the diseases they carry), as well as crop pests and weeds. Natural ecosystems are complex and intervening to either conserve a beloved species or suppress the growth of an unfavorable one may not be within our power. Our best hope to stabilize our climate is by significantly reducing greenhouse gas emissions.

Are there migratory species that visit my area?

Climate change is threatening migratory species in a number of ways, in addition to widespread habitat degradation. You can find out if migratory species visit a national park near you by visiting the National Park Service (NPS) website. You can also explore a host of tools on BirdCast, developed by the Cornell Lab of Ornithology. Journey North provides maps of Fall 2020 sightings of a selection of popular species, such as the monarch butterfly and the bald eagle.

How is climate change affecting farmers near me?

The United States Department of Agriculture (USDA) coordinates regional ‘Climate hubs’ to disseminate region-specific, scientific insights relating to climate change to agricultural producers. You can find out what’s important to farmers in your region by checking out your region’s homepage or contacting your hub’s coordinator.

When does fall foliage appear in my area?

Fall foliage typically peaks between late September and late October. Check out the Smoky Mountains Fall Foliage Prediction Map for a more precise prediction of when the leaves are expected to turn in your area.

There are several government bureaus with local agencies that work towards preserving native species and ecosystems while managing invasive ones. You can get in touch with local experts in your area through the U.S. Fish and Wildlife Service (USFWS) as well as the Environmental Protection Agency (EPA).

The SciLine service, 500 Women Scientists or the press offices of local universities may be able to connect you with local scientists who have expertise on the impacts of a warming fall season in your area. The American Association of State Climatologists is a professional scientific organization composed of all 50 state climatologists.

Daily temperature data from 1970-2019 were obtained from the Applied Climate Information System. Thresholds were calculated by finding the average summer maximum temperature from 1970-2019 and rounding that number to the nearest five degrees. For example, the average summer maximum temperature (1970-2019) in Abilene is 93.4°F so the appropriate threshold would be 95°F. Only 242 of our 244 stations are included in summary statements due to large data gaps in St. Johnsbury, Vt. and Wheeling, W. Va.