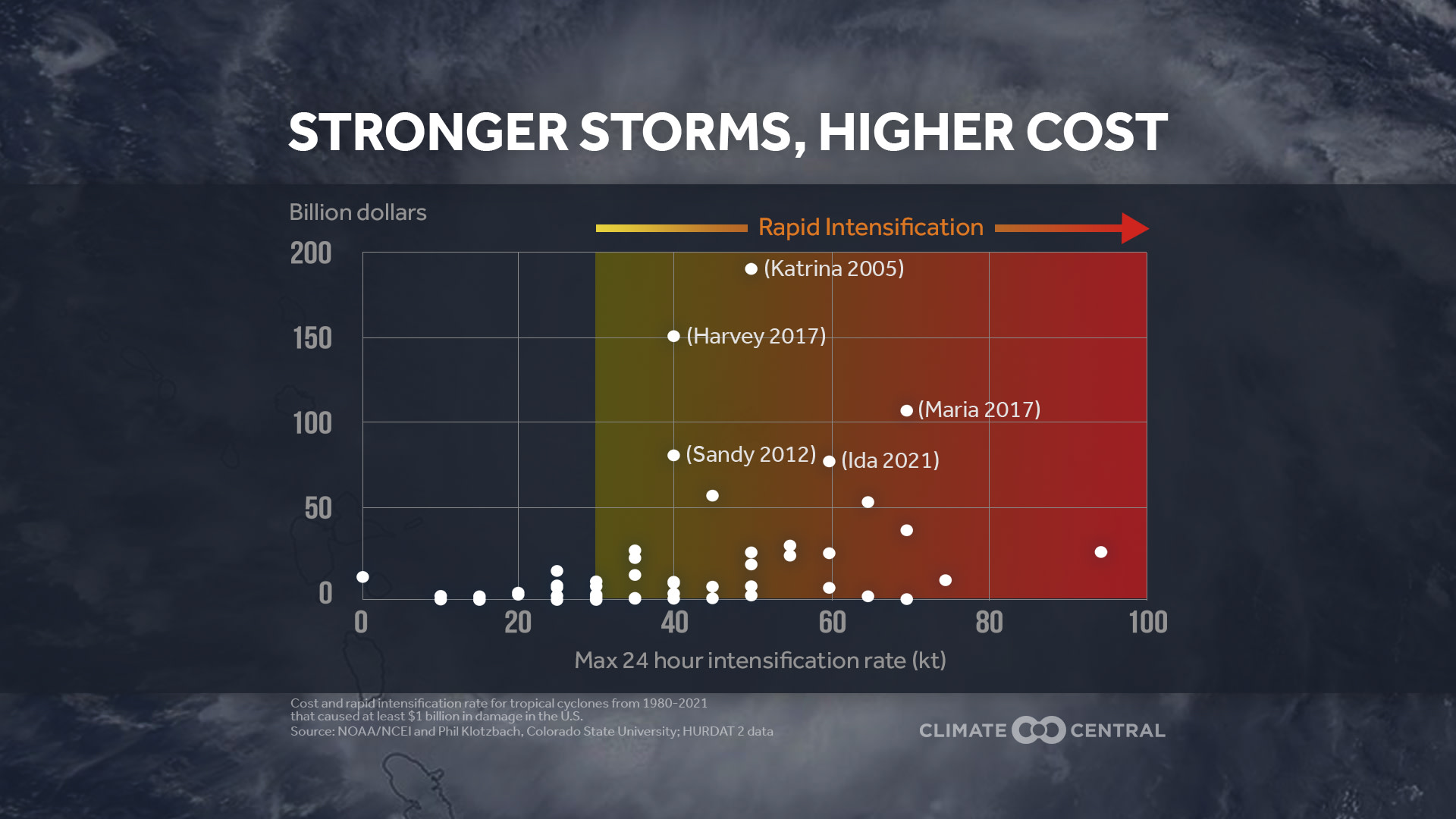 The 2022 hurricane season has been quiet so far, but NOAA still predicts above-average activity (as of August 4). And as we’ve seen in recent years, it only takes one major hurricane to cause widespread devastation and damage. To mark the peak of Atlantic hurricane season (September 10), we’re looking at the high costs of hurricane rapid intensification.

Tropical cyclones, which include hurricanes and tropical storms, are the most deadly and costly weather disasters in the U.S. by far. Tropical cyclones with damages exceeding $1 billion account for a total of $1.19 trillion in damage since 1980—more than half of the cost of all billion-dollar disasters since then.

Of the 10 most costly weather disasters in the U.S., eight were hurricanes. The top three (Hurricanes Maria, Harvey, and Katrina) resulted in a total of 4,903 lives lost and over $442 billion in damages.

Total billion-dollar tropical cyclone costs are highest in Louisiana, Texas, and Florida—but extend to 29 states throughout the South, Southeast, Northeast, and Ohio Valley, as well as to Hawaii, Puerto Rico, and the U.S. Virgin Islands.

Tropical cyclones can generate multiple devastating hazards including storm surge, heavy rainfall, flooding, winds of 100 mph or more, and tornadoes. About half of the fatalities in the U.S. attributed to Atlantic tropical cyclones from 1963-2012 were due to storm surge. Another 27% of fatalities were due to heavy rainfall, which increases the risk of flooding far from the coast. The risks multiply when hurricane-induced power outages overlap with other extreme events such as heatwaves.

About 80% of major hurricanes (category 3-5) undergo rapid intensification—defined as an increase in the maximum sustained winds of a tropical cyclone of at least 30 kt (about 35 mph) in a 24 hour period.  It can be challenging to forecast rapid intensification, and this contributes to the high human and financial toll of such storms.

The five most costly hurricanes had maximum rapid intensification rates between 40-70 kt in 24 hours:

Observations show an increase in tropical cyclone intensification rates in the Atlantic basin from 1982-2009. And on a global scale, extreme rapid intensification events (50+ kt in 24 hrs) have increased significantly from 1990 to 2021, likely primarily due to warming sea surface temperatures.

Ocean warming due to human-caused climate change is fueling an increased proportion of intense tropical cyclones and contributing to an increased fraction of storms that undergo rapid intensification.

Since 1979, human-caused warming has increased the global likelihood of a tropical cyclone developing into a major hurricane (category 3 or higher) by about 8% per decade. The latest IPCC reports conclude that the proportion of very intense (category 4 and 5) tropical cyclones is projected to increase globally with continued warming.

The risks from tropical cyclones reflect a combination of three factors:

While the frequency of landfalling hurricanes in the continental U.S. hasn’t changed from 1900-2017, the resulting economic losses have increased significantly over the same period. Population growth and regional wealth along the U.S. Gulf and East Coasts (increased exposure) are reflected in the increased damage.

The SciLine service, 500 Women Scientists or the press offices of local universities may be able to connect you with local scientists who have expertise on hurricanes and climate change. The American Association of State Climatologists is a professional scientific organization composed of all state climatologists.

Special thanks to Dr. Phil Klotzbach of the Colorado State Tropical Meteorological Project for assistance. A rapid intensification period (RI) is defined by the National Hurricane Center as an increase in the maximum sustained wind speed of at least 30 knots (approx 35 mph) in 24 hours. Hurricane data were collected from the HURDAT2 dataset and intensity of storms was analyzed at synoptic times (00, 06, 12, 18 GMT). Only storms that had reached tropical storm status were considered for the rapid intensification analysis and subtropical systems were excluded. Because of limitations in detection (before satellite and aircraft reconnaissance), HURDAT2 data before 1980 were excluded in this analysis.