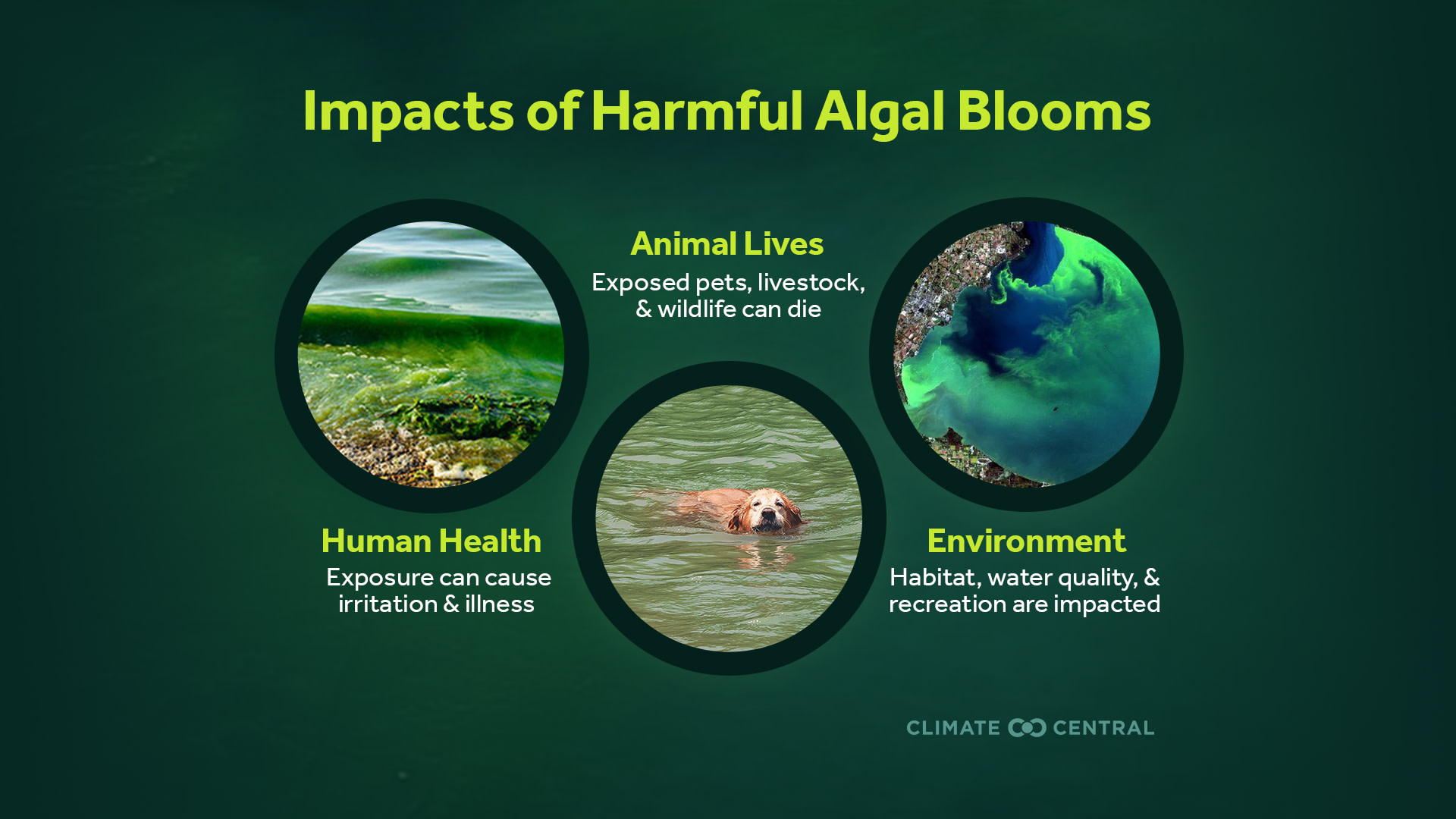 What are harmful algal blooms?

Freshwater harmful algal blooms (HABs) are frequently caused by cyanobacteria that produce toxins that can harm people and other animals. Cyanobacteria (commonly called blue-green algae) thrive in warm water and feed on nutrients (nitrogen and phosphorus) that run off the land. Though naturally occurring in freshwater, these bacteria can become dangerous when their colonies bloom rapidly and essentially overwhelm the ecosystem.

Blooms can be foul-smelling and may appear as discolored water, scum, foam, or mats of algae-like growth on the surface of freshwaters. In addition to being unattractive and potentially dangerous, blooms can disrupt our lives. Their presence can temporarily shut down recreation on a lake or river, and cyanotoxins in reservoirs can impact drinking water supplies for entire communities.

HAB exposure can carry short-term and long-term health risks. Direct contact with cyanobacteria during recreational activities, such as swimming or fishing, or even inhaling when near a bloom can expose people to cyanotoxins. Toxins can also proliferate in drinking water supplies and can be ingested through contaminated fish and shellfish.

Some toxins produced by cyanobacteria are known to cause acute illness in humans, such as allergic reactions, gastrointestinal upset, eye irritation, respiratory distress, and flu-like symptoms. Long-term health effects from ingesting cyanotoxins can include liver damage, and researchers are investigating links to neurodegenerative diseases (such as Alzheimer’s Disease, Parkinson’s Disease, or ALS) related to cyanotoxin exposure.

Pets and wildlife are also susceptible to cyanotoxins. Dogs can be exposed in ways similar to humans—drinking or swimming during a bloom—or even from grooming themselves after leaving the water. Other animals in the ecosystem, including fish and birds, can become seriously ill or die during toxic algae blooms.

There are ways to manage the risks of HABs.

Climate change might make managing HABs more complex, but there are ways to mitigate the risks.  Long term, global efforts to reduce carbon emissions can slow warming and limit the increase in factors like heat and rainfall that boost the risk of HABs. On a local scale, the most manageable factor is reducing nutrient pollution brought into lakes during heavy rain events. Short-term solutions to remediate blooms (such as chemical applications of algaecides) can play a role in reducing risks to human and environmental health.

Are freshwater bodies in my area at risk from Harmful Algal Blooms?
Communities with pronounced warming trends, intensifying rainfall trends, and freshwater bodies susceptible to nutrient loading are especially at risk. Well-documented HABs and risk factors have been reported across the U.S. There are predictive modeling initiatives in some areas, as well as efforts to remotely sense HABs for better data collection.

Where can I find Harmful Algal Bloom reports?
Documentation of HABs is improving, but remains inconsistent at the national scale, and there are few sources of historical information. The CDC manages voluntary reporting through the One Health Harmful Algal Bloom System. Generally, HABs in public waters may be recorded due to citizen complaints, during routine water quality monitoring, or in response to reports of human or animal illness. Some bodies of water that experience frequent blooms (such as Lake Erie) are monitored by federal agencies. Specific water quality sampling practices and reporting mechanisms may differ by state, territory, or agency. Resources for specific states or localities include: water district offices; public health departments; environmental protection agencies; and extension agents and specialists.

What resources support communication of the public health risks of algal blooms?
A number of agencies and organizations (including EPA) supply communications resources for health officials and resource managers to warn people about HAB risks, including signs and press release templates. Some states or territories have online dashboards available for the public to track bloom activity.

The SciLine service, 500 Women Scientists, or the press offices of local universities may be able to connect you with local scientists who have expertise on Harmful Algal Blooms and climate change. The American Association of State Climatologists is a professional scientific organization composed of all state climatologists.

You can view SciLine’s recorded interview with Dr. Silvia Secchi, professor of geographical and sustainability sciences at the University of Iowa.