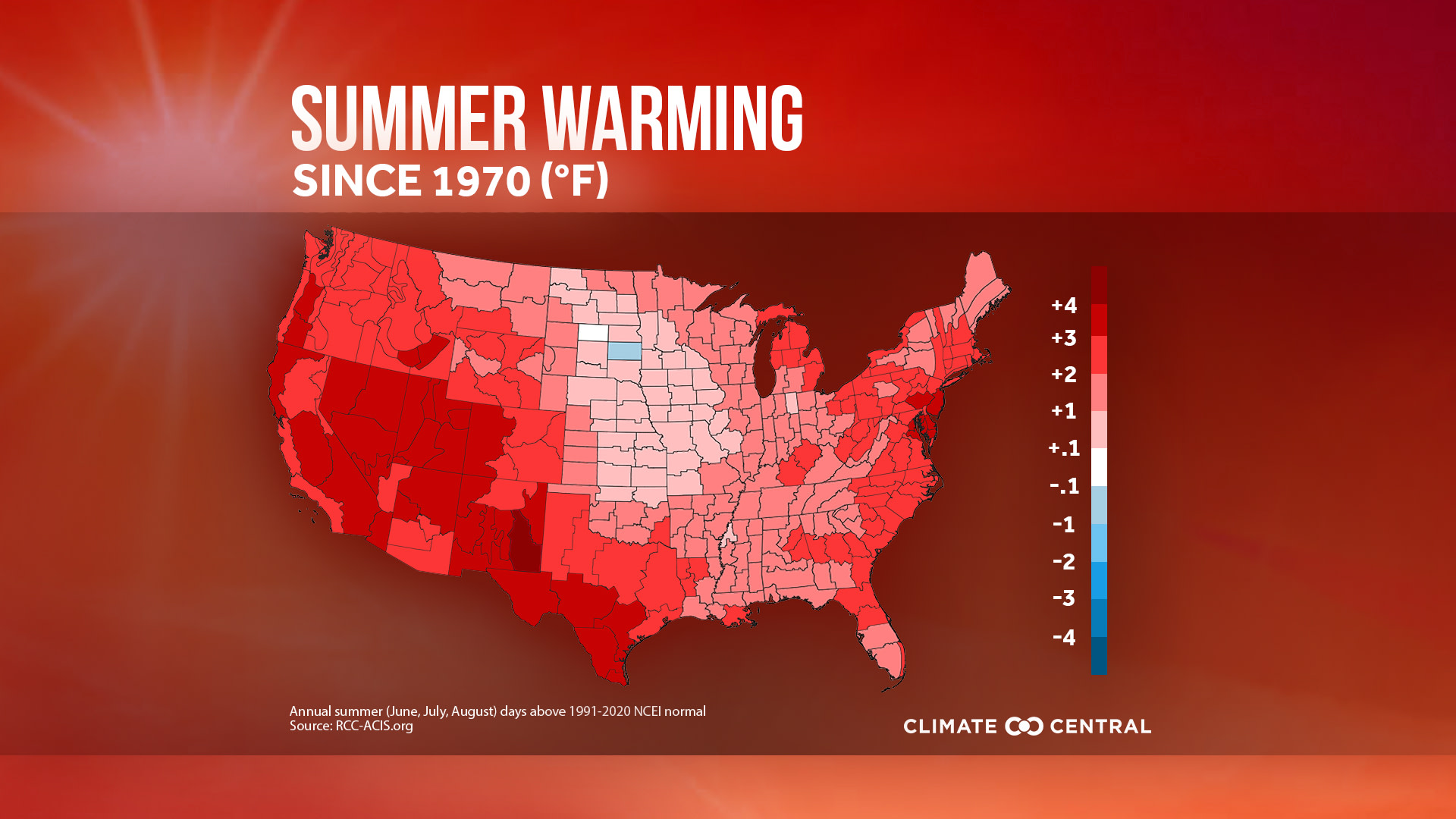 Hurricane season also begins on June 1.
Explore our infographics, trend analysis of tropical storm timing and intensity, and reporting resources to help you cover hurricanes in a warming climate.

June 1 is the first day of meteorological summer. This year’s summer package includes:

The heat is on. As planet-warming gases from fossil-fuel burning increase global average temperatures, we’re experiencing more extreme heat events. Extreme heat is most apparent in the summer since it's the hottest time of year.

Extreme heat is a serious health hazard. Exposure to extreme heat makes it difficult for our bodies to cool off, resulting in heat-related illnesses including heat cramps, heat exhaustion, and potentially fatal medical emergencies like heat stroke.

Summer heat can also exacerbate poor air quality by trapping harmful pollutants close to the Earth’s surface and creating ground-level ozone. These pollutants can exacerbate respiratory issues in people with asthma and other lung diseases.

From 1979 to 2018, more than 11,000 Americans died from heat-related illness. In a recent study, researchers concluded that heat-related deaths in the U.S. may be “substantially larger than previously reported.”

According to The Centers for Disease Control and Prevention, the most vulnerable populations to excessive heat areinfants and children, athletes, adults over 65, outdoor workers, low income households, and people with chronic medical conditions.

How does heat impact cities? Which neighborhoods are most susceptible to excessive heat?

Climate Central’s urban heat island report analyzed heat island intensity in 159 U.S. cities. The Future Heat and Vulnerability Map created by the National Integrated Heat Health Information System (NIHHIS) assigns a vulnerability score to each county across the U.S. based on race, income, and other parameters.

What measures are local officials taking to protect people from extreme heat?

The EPA maintains a Community Actions Database of measures that communities are taking to mitigate the heat island effect in their area. Emergency management can help reduce climate risk in vulnerable communities. FEMA has a dedicated page with tools, data, and resources on climate resilience. For state-specific emergency management information, search for your state on the USA.gov site.

The SciLine service, 500 Women Scientists or the press offices of local universities may be able to connect you with local scientists who have expertise on extreme heat and warming summers. The American Association of State Climatologists is a professional scientific organization composed of all state climatologists.

Summer (June, July, and August) temperature data from 1970-2021 were obtained from the Applied Climate Information System. Displayed trend lines are based on a mathematical linear regression. Climate Central's local analyses include 247 stations. However, for data summaries based on linear trends, only 246 stations are included due to large data gaps in Wheeling, W. Va.