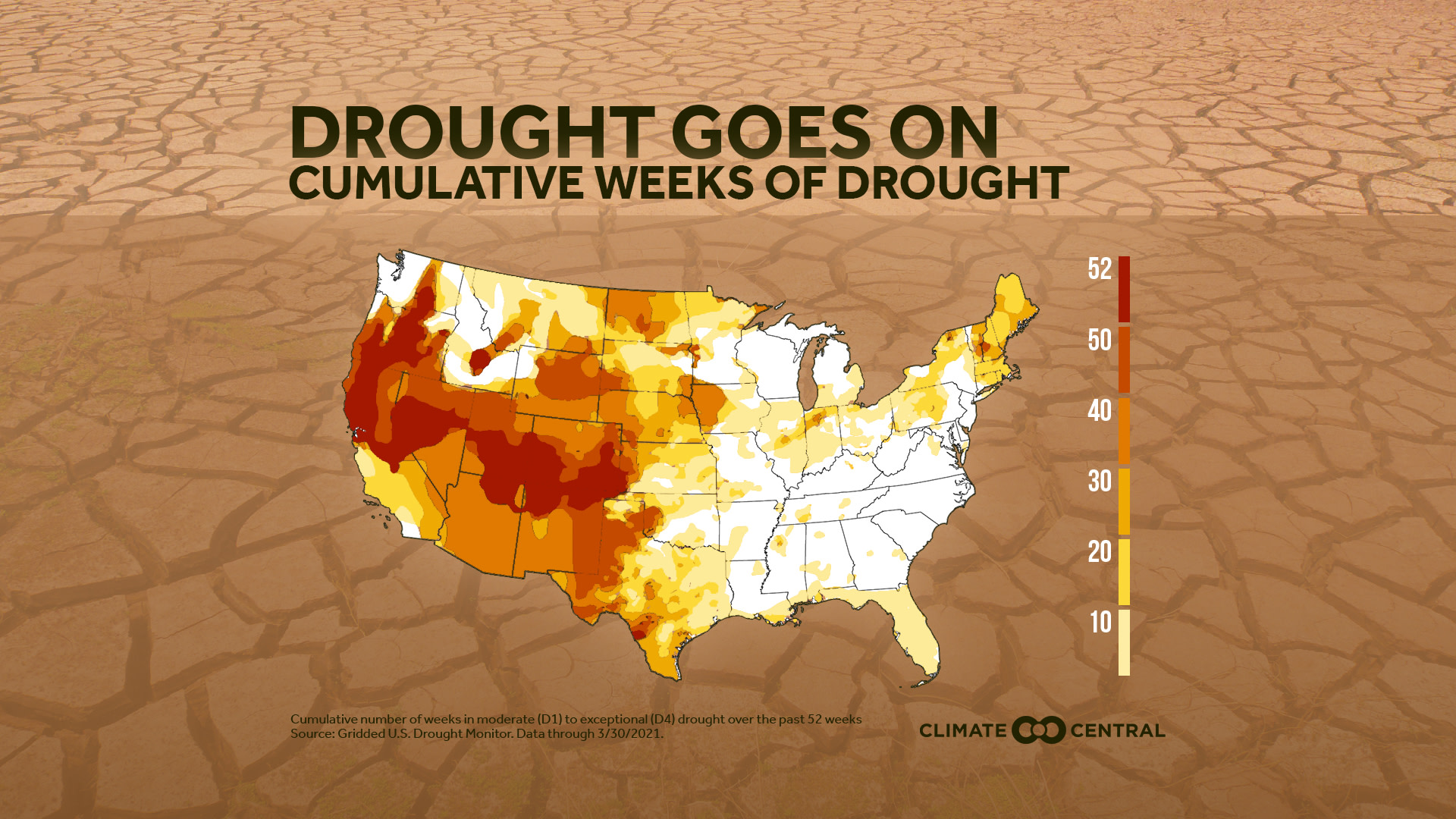 Historic drought conditions are continuing to affect Western states, despite winter weather that included major snowstorms and a high-impact atmospheric river. In 2020, the U.S. slipped into the most widespread drought since the summer of 2013, with about half of the country experiencing some level of drought. With many areas in the Western U.S. in drought for more than 12 consecutive months, it underscores that drought is now more of a rule rather than an exception.

The Palmer Hydrological Drought Index (PHDI) measures droughts and their long-term, hydrologic impacts, like their effects on groundwater and reservoir levels. According to the 24-month average PHDI index, the Western U.S. has experienced drought in 17 of the past 20 years. A huge part of the West has been in consistent drought for a year, including Arizona, Colorado, and northern California.

But it’s not just the West this year. According to the April 1st release of the U.S. Drought Monitor, 44% of the contiguous states are in moderate drought or worse conditions, signaling potential trouble to water supplies for municipalities, agriculture, and recreation:

Melting snowpack provides an essential water supply to rivers and reservoirs in the Western U.S in their drier summer months. Due to climate change, more winter precipitation falls as rain and, as a result, snowpack has diminished rapidly in the West, becoming less reliable. According to a 2018 study, there has been a 15-30% average decline in the amount of water stored as snowpack, as measured on April 1st (known as the snow water equivalent), across the West since 1955.

Moreover, groundwater supplies that act as a buffer in bad years are becoming depleted. The rate of water withdrawal outpaces the rate at which they are recharged by rainfall, creating an increasingly unsustainable situation which is only worsened by climate change. Once they develop, these impacts take a long time to recover from.

At over $9 billion per event, drought has the second-highest price tag of any type of billion-dollar disaster event since 1980—damaging crops, reducing the efficiency of thermoelectric power generation, threatening outdoor recreation and tourism industries, and degrading ecosystems. Parched rangelands and forests also increase the fuel for wildfires, making for dangerous conditions for vulnerable species and nearby communities. In addition to combating climate change, sustainable water management strategies need to be implemented to maintain water security — in the U.S. and beyond.

How can we mitigate the risk of drought?
Check out this list of each state’s drought management plans maintained by the NDMC. You can browse the Solutions Story Tracker by the Solutions Journalism Network for inspiration. Some examples of drought solutions stories include ranchers in Colorado who are trying regenerative agriculture practices, a California city that imposed water tariffs, and use of satellite technology in Texas as part of their conservation strategies. Project Drawdown and EPA’s WaterSense also provide information on water conservation and efficiency strategies.

The SciLine service, 500 Women Scientists or the press offices of local universities may be able to connect you with local scientists who have expertise on drought in your area. The American Association of State Climatologists is a professional scientific organization composed of all 50 state climatologists. The National Drought Mitigation Center also offers a list of drought and climate experts by state.

Western snowpack data (as of April 1) are from the U.S. Department of Agriculture western U.S. SNOTEL network. Values are expressed as a percentage above or below the median normal (1981-2010) snow water equivalent for the major western river basins in the SNOTEL network. Long-term drought conditions are illustrated using the 24-month average values of the Palmer Hydrological Drought Index (nClimDiv dataset) for the Western U.S. climate region (CA and NV) and 11 contiguous Western states at the end of each calendar year. For example, the value for 2020 data is the averaged values of the 24-month period from January 2019 to December 2020. Methodology developed by Deke Arndt at NOAA NCEI. The national map showing the number of cumulative weeks in drought (out of last 52) was created using the Gridded U.S. Drought Monitor (data through 3/30/2021).